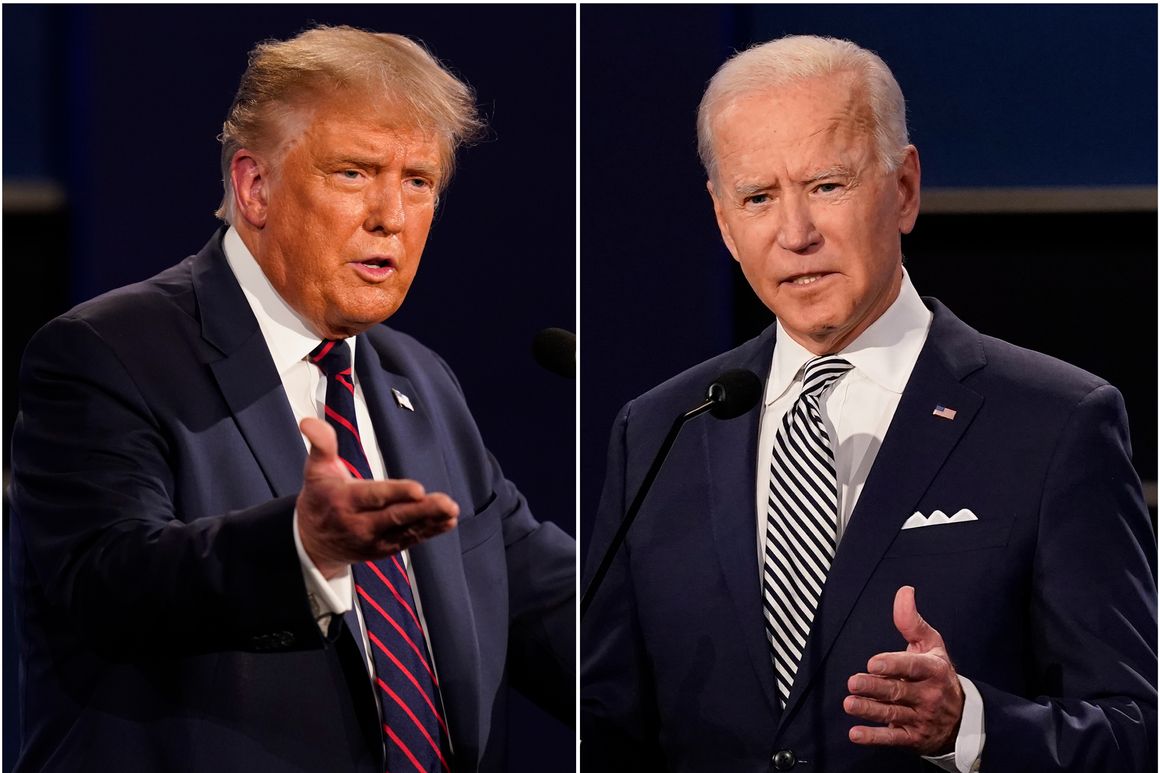 With three weeks to go until Election Day, I inched out a bit farther, describing the changing landscape (literally) of yard-sign politics, the early indicators of explosive, unprecedented turnout and the fork in the road Republicans could face as soon as November 3.

Now, with just two weeks to go until Election Day, here are two more strongly held hunches I’ve got about the race for president.

There has been a tendency, over the past 2½ years, to place all of the emphasis—when discussing the GOP’s vanishing footprint in the major metropolitan suburbs—on the white, college-educated women fleeing the party.

Don’t get me wrong. Much of that emphasis is warranted. No single group has defected from Trump’s party at a faster or more conspicuous clip than the demographic he endearingly calls “The Suburban Housewives of America.” In 2016, exit polling showed Trump holding his own with college-educated white women, winning 44 percent of them to Hillary Clinton’s 51 percent. Two years later, the bottom fell out: Exit polling from House races nationwide showed Democrats winning this group by 20 points, leading to a cascade of some three dozen suburban Republican districts turning blue in 2018.

There is real fear among Republicans that things could get even uglier in November, that Trump could lose college-educated white women by a figure approaching 25 points, crippling his campaign in the suburbs and making victory nearly impossible. But there is another demographic worth monitoring—a group that gets none of the attention, one that we could find ourselves marveling at in the aftermath of November 3: white college-educated men.

Trump carried these voters easily in 2016, beating Clinton among them by 14 points. But his support appeared soft. He claimed just 53 percent of their votes, while 8 percent of them voted for a third-party candidate, the highest share of any gender or education demographic. This has long been cause for optimism inside Trump world: Even if behaviorally Republican white women were peeling off, the president’s team believed, there was still untapped support among some of their husbands in the suburbs, voters who are foundationally right of center but could not bear to vote for either Trump or Clinton in 2016.

The problem for Trump? That holdout of college-educated white men is breaking—and not in his direction.

Twice in the past week, I’ve been given reliable polling from the ground in battleground states that suggests something that was once unthinkable: Trump is losing college-educated white men for the first time in his presidency. The margins aren’t huge, but they are consistent with a trend line that dates to 2018, when Republicans carried this demographic by just 4 points. What the numbers suggest—in both private and public polling—is that Biden is no longer just walloping Trump among white women in the suburbs, he’s pulling ahead with white men there, as well.

We shouldn’t get carried away with this just yet. Republicanism is deep in the DNA of many of these voters, and it wouldn’t be surprising to see a last-minute lurch back in the direction of their political home.

Still, the fact that Trump is sweating college-educated white men two weeks out from Election Day tells you everything you need to know about the state of the race at this moment. There has been growing speculation of late, among the sharpest minds in the political class, about a blowout in November—the sort of landslide victory for Biden that we haven’t seen in decades. There’s hardly any guarantee of that happening; Trump still clings to a stubborn path to victory, albeit a narrow one.

But if it does happen—if the floodgates open and Trump is washed out by a historic blue wave—we will look to unlikely groups of voters as the reason why. One of those groups has gotten plenty of ink: seniors. But keep an eye on college-educated white men as the other.

More than 219,000 Americans are dead from a global pandemic. Millions of adults are home from work and millions of kids are home from school. The streets of big cities and small towns have been convulsing with anger and protest and even sporadic violence.

All of this is politically significant. All of it has contributed to an election-year environment that is fundamentally detrimental to the incumbent.

But if Trump loses, the biggest factor won’t be Covid-19 or the economic meltdown or the social unrest. It will be his unlikability.

As I wrote last week in a dispatch from Arizona, sometimes you hear a voter say something “so basic, so one-dimensional, that you’re inclined to dismiss it until you hear it for the thousandth time.” That’s the story of this election: All across America, in conversations with voters about their choices this November, I’ve been hearing the same thing over and over again: “I don’t like Trump.” (Sometimes there’s a slight variation: “I’m so tired of this guy,” “I can’t handle another four years of this,” etc. The remarkable thing? Many of these conversations never even turn to Biden; in Phoenix, several people who had just voted for the Democratic nominee did not so much as mention his name in explaining their preference for president.

Generations of pollsters and journalists have fixated on the question of which candidate voters would rather have a beer with—a window into how personality translates into political success. Here’s the thing: Americans have been having a beer with Trump for the past four years—every morning, every afternoon, every evening. He has made himself more accessible than any president in history, using the White House as a performance stage and Twitter as a real-time diary for all to read. Like the drunk at the bar, he won’t shut up.

Whatever appeal his unfiltered thoughts once held has now worn off. Americans are tired of having beers with Trump. His own supporters are tired of having beers with Trump. In hundreds of interviews this year with MAGA loyalists, I have noted only a handful in which the person did not, unsolicited, point to the president’s behavior as exhausting and inappropriate. Strip away all the policy fights, all the administrative action (or inaction), all the culture war politics, and the decision for many people comes down to a basic conclusion: They just do not approve of the president as a human being.

I’m reminded of a recent conversation I had with Dan Crenshaw, the Republican congressman from Texas. He shared how in Harris County—particularly in some of the affluent suburbs—many voters he encountered, including center-right Republicans, are refusing to support Trump’s reelection. I asked him why.

“They have a personal dislike for him. It’s just that simple,” Crenshaw said.

Crenshaw is right. If Trump loses, history will record any number of contributing factors to his political demise. But it should place them all in the context of that “simple” underlying reality.