2 People Injured After Vehicle Careens Into Protesters In Seattle 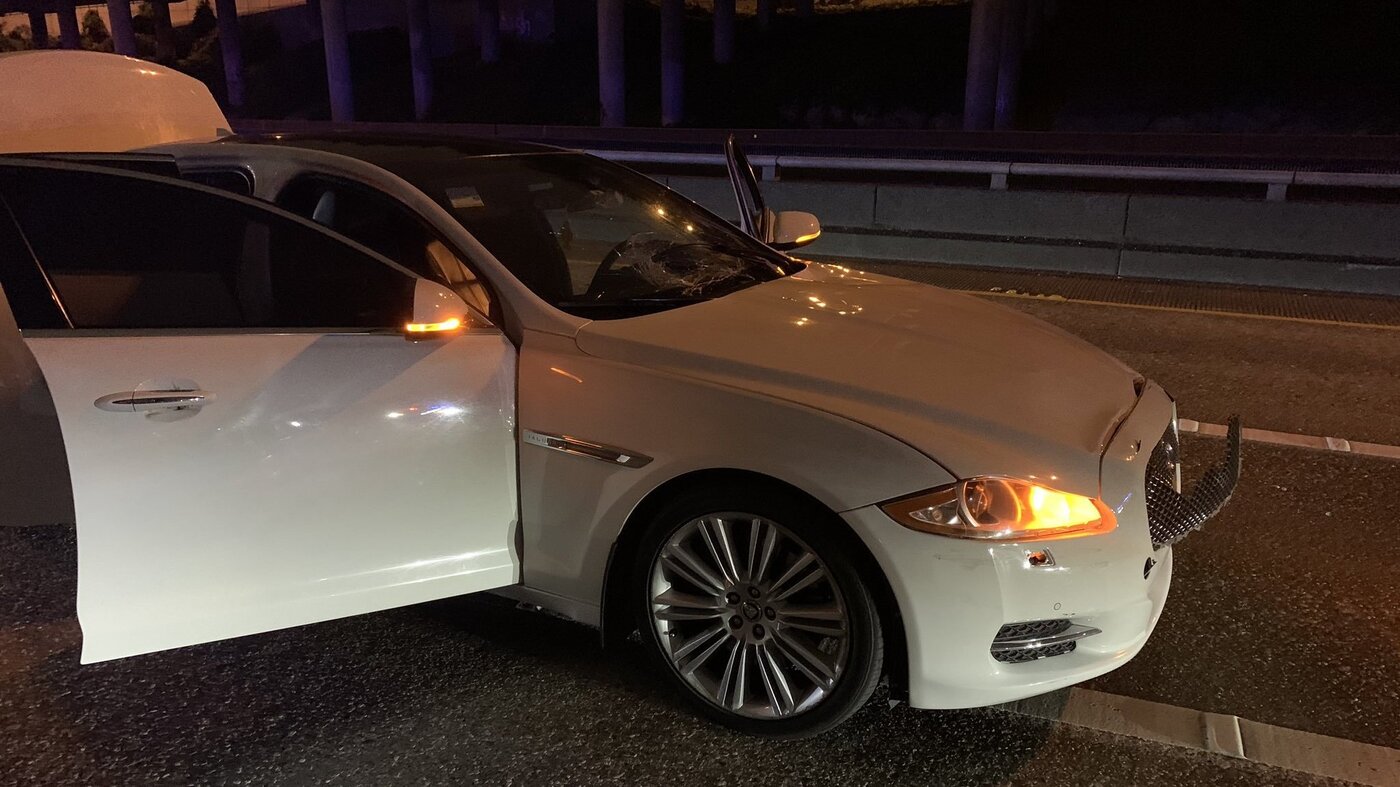 Two women have been hospitalized, one with life-threatening injuries, after a vehicle barreled past a police barrier and into protesters on a freeway overnight in Seattle.

Washington State Patrol said Saturday that the driver of the white Jaguar sedan, a 27-year-old man, is in custody. At this point, officers have not offered a motive, though Capt. Ron Mead said officers believe the suspect was not impaired.

At a news conference early Saturday, Mead did not offer further details on how authorities believe the man bypassed a police closure to reach the victims. But he warned that the incident offers a stark lesson for protesters.

“My hope is, as a result of this tragedy, protesters will reconsider their desire to be on the interstate,” he said, “because I cannot guarantee their safety, plain and simple.”

Here are two pictures of the suspect vehicle that struck two protesters on I-5 this morning. Investigation into motive and point of entry in to I-5 are still under investigation. pic.twitter.com/gU1QH6TFTu

Several graphic videos of the incident hit social media shortly afterward. In one, the sedan careens past a cluster of vehicles blocking its way, appearing to swerve back into the pair of victims. They’re flung skyward off the car’s hood before tumbling back down to the surface of Interstate 5.

Another video livestreamed a long, uneventful record of the protest — until, in the final 15 seconds, someone begins to scream, “Car! Car! Car!” The footage ends with the screech of brakes slicing through a swirl of screams and unfocused images.

Mead said that one 24-year-old victim is fighting for her life at the hospital. The other, who is 32, also suffered serious injuries.

The incident comes just days after Seattle authorities dismantled a blocks-long zone that had been set aside for protests against police brutality and racial injustice. Since early June, the Capitol Hill Organized Protest zone had been home to demonstrations demanding changes to policing and funding cuts to the force.

The site was closed because it had become “lawless and brutal,” Seattle Police Chief Carmen Best explained this week, noting that shootings in the zone had resulted in two deaths. But the closure has failed to halt protesters from gathering across the city, including on the freeway.

Mead said Saturday that protesters have forced a closure on Interstate 5 every day for nearly three weeks. The freeway, however, is “simply not a safe place” for protesters to gather, he added.

There have been reports of at least 50 vehicle-ramming incidents since nationwide protests erupted in late May — many of which were suspected attacks by right-wing extremists targeting Black Lives Matter protesters.

“The message they’re trying to send is, ‘You need to get out of the street and stop these protests,’ ” Ari Weil, the terrorism researcher at the University of Chicago who compiled those statistics, told NPR last month. “They’re trying to intimidate the most recent wave of BLM protesters to stop their movement.”