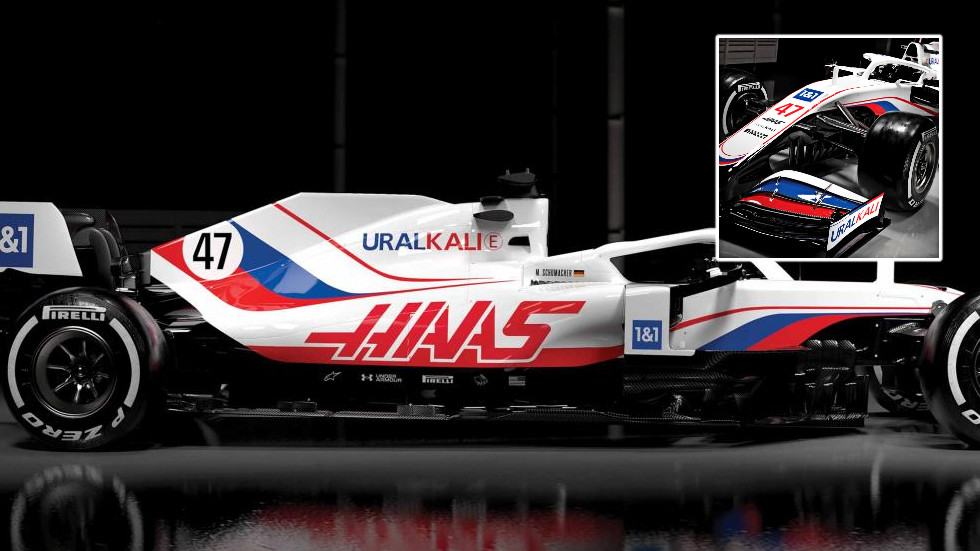 Formula One team Haas, whose main drivers are Russian ace Nikita Mazepin and Michael Schumacher’s son, Mick, have hit the headlines ahead of the new season by revealing a bold new livery design in the colors of the Russian flag.

The striking new look, which is part of a rebranding after the American team signed a multi-year title partnership with the world’s largest potash fertiliser producer, Uralkali, received a mixed response from fans, some of whom joked about the colors being fitting for rookie Mazepin.

The 22-year-old is set to race under a neutral flag as part of a CAS ruling, while Schumacher is one of the most hotly-tipped rising stars in Germany, where his father became a national hero during his stratospherically successful reign as a Formula One champion.

“It’s definitely a case of all change,” said team chairman Gene Haas, who will oversee the renaming of the outfit to the Uralkali Haas F1 Team.

“It’s an exciting time for the team with Uralkali coming onboard and having [the two racers] driving for us. We look forward to representing their brand throughout the season.”

The move is far from the first time that a team has taken colors that closely resemble a national flag. This season alone, Alpine has taken blue, white and red colors that appear to be a nod to its French origins.

Mazepin’s father, Dmitry, bought a 20 percent stake in Uralkali for $ 2.9 billion in 2013 and is the company’s Deputy Chairman of the Board of Directors.

People can do stuff. There’s a lot fewer sponsors on that car than last year. Why? Because people expressed their distaste at Mazepin and Haas and the sponsors didn’t want to be associated with it.
— Kho (@Khodatii) March 4, 2021

Haas have been struggling for money, a title sponsor like uralkali will help them financially stay in the sport

“Haas have been struggling for money,” speculated one fan, while others continued to echo the Twitter hashtag campaign that is ongoing against Mazepin junior despite his latest apology for last year’s “groping” controversy earlier this week.

“A title sponsor like Uralkali will help them financially stay in the sport.”

A German brand with close links to Schumacher will also feature on the car: telecommunications company 1&1 has appointed the reigning Formula 2 champion as an ambassador and partnered with the team.

Looks kinda retro with the number, really liking this one

“Uralkali Haas F1 and Mick Schumacher complement our sports sponsorship activities perfectly,” said company CEO Ralph Dommermuth, praising the team for having “many exciting elements which we hope will make for an exciting and competitive 2021.”“The team is starting the new season with a fresh energy.”

The team chairman is already looking ahead to 2022, when new rules, designed to make races closer through cheaper cars and better aerodynamics, will be introduced.

“I’m hoping that we get back to being in the mix for scoring some points at these races,” said Haas.

“It’s been a tough couple of seasons but we’ve also got our eye on the bigger picture – in particular, 2022 and the implementation of the new regulations.”

The VF-21 car with its new branding and livery will debut during pre-season testing in Bahrain on 12th March, where the season begins a fortnight later.

“It’s going to be an exciting year head – hopefully exciting only in a good way, though,” said Team principal Guenther Steiner, adding that he had been pleased by the alliance with Uralkali.

What sponsors have left because of Mazepin lmao

Well judging by a comparison of this car to last year a ton of them have.

I wonder which other huge economic event could’ve caused that

“We face a year of learning with the drivers while technically we look ahead to the future. It’s no secret that the VF-21 will not be developed as we focus our energies now on the 2022 car and, what we hope, will be a more level playing field.

“We all know roughly where we expect to be this season in terms of the competition but we must ensure we’re there to capitalize on opportunities when they present themselves.

“But first we have to get the guys dialed in at testing. Time behind the wheel is short, so it’ll be a steep curve, but I’m personally looking forward to seeing their development as drivers and as team members within Uralkali Haas F1 Team.”
Also on rt.com Russian driver Nikita Mazepin aims to win outraged F1 fans over and admits he has not contacted woman in ‘groping video’ since row