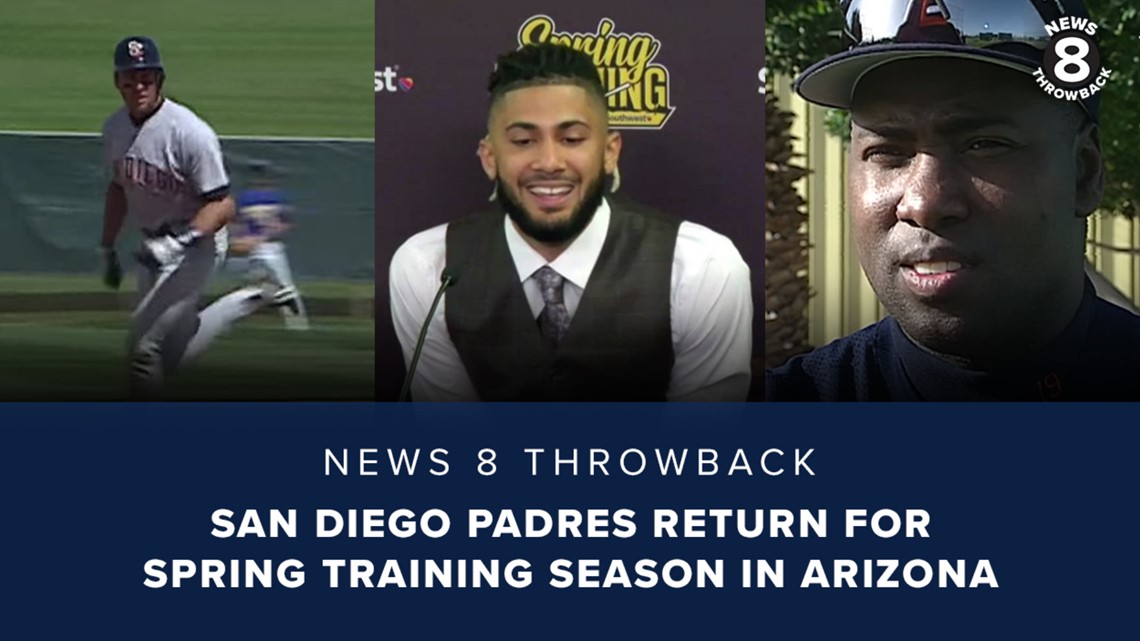 In this week’s News 8 Throwback, we take a look back at the spring training seasons of yesteryear as the Padres kick off a month of play in Arizona’s Cactus League.

SAN DIEGO COUNTY, Calif. — Spring training kicked off Sunday for the San Diego Padres for a month of play at the Peoria Sports Complex in Arizona. It’s the first time since March of last year that the Padres were able to play in front of fans and hear real crowd noise.

The excitement over the 2021 Padres season has reached a fever pitch with the team giving phenom Fernando Tatis Jr. a mega-contract extension and the offseason acquisitions of pitchers Blake Snell, Yu Darvish, Joe Musgrove and Mark Melancon. The hype around the 2021 Padres is real, with many baseball writers putting the friars as a top contender for a World Series trophy.
The Padres are set to open the regular season April 1 against Arizona at Petco Park. The full spring training schedule is available here.
Now, let’s take a look back at the spring training seasons of yesteryear with these vintage clips featuring notable Padres players including Tony Gwynn, Ken Caminiti, Fred McGriff, Gary Sheffield and more.

News 8’s Ted Leitner headed to Yuma, Arizona in March of 1979 for San Diego Padres spring training. Third baseman-turned-coach Doug Rader spoke to Ted about his reputation as a player and his plans for the Padres organization. Ted also took a ride around Yuma with Padres relief pitcher John D’Acquisto to see what the city had to offer ball players.

News 8’s Jim Laslavic got an early glimpse of the San Diego Padres team in 1984 at spring training in Yuma, Arizona. Interviews with Steve Garvey, Ed Whitson and other players revealed their hopes for the upcoming season in which they won their first National League pennant. “If there’s ever a time that we’re gonna win it, it’s gonna be this year,” said one player.

As the San Diego Padres began their final spring training season in Yuma, Arizona, News 8’s Rick Powers checked in with the players, management and fans about the upcoming season. Amidst many new faces on the team, Powers noted “the big three” expected to be successful in the 1993 season were Tony Gwynn, Fred McGriff and Gary Sheffield.

At the end of March 1993, the San Diego Padres played their last spring training game in Yuma, Arizona, and News 8’s Rick Powers was there. Padres legend Tony Gwynn said he would miss playing in Yuma because after more than a decade he had finally found a good fishing spot nearby. The team had practiced in Yuma in 1969 but in 1994 moved to the City of Peoria, along with the Seattle Mariners to play at the first two-team spring training facility ever built, Peoria Sports Complex.

The San Diego Padres announced Padres/Astros trade of December 1994, Steve Finley and Ken Caminiti at a press conference in 1995.

In February 1997, Gold Glove Award-winning third baseman Ken Caminiti arrived at spring training in Peoria, Arizona, with his San Diego Padres teammates. Just five months prior, Caminiti had undergone surgery to re-attach a torn rotator cuff in his left shoulder, but he was hopeful he would be ready for the season opener. Caminiti was also coming off of being named the National League MVP in 1996 – the only time a Padre received the honor in franchise history. He went on to earn himself another Golden Glove in the 1997 season and was named to the All-Star team. Sadly, Caminiti died in 2004 of a drug overdose. He was posthumously inducted into the San Diego Padres Hall of Fame in 2016.