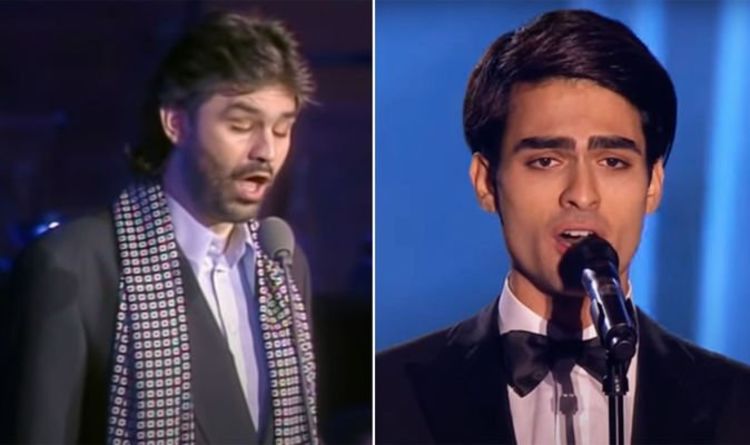 Andrea Bocelli’s son Matteo Bocelli is gearing up to release his debut solo album later on this year. The 23-year-old began performing live with his father back in 2018 with their sensational single Fall On Me, which even featured in a Disney movie. But did you know know that Matteo has also been singing tracks his father is well known for covering too?
A couple of years ago Matteo performed in Solvenia’s Postojna Cave, as captured on the country’s TV station RTVSLO.

There, the young man who has inherited his father’s vocal talent and good looks sang Caruso.

The tenor also featured the track on his 1997 album Romanza three years later.

Dressed in black tie, Matteo followed in his father’s footsteps when he performed a goosebump0inducing rendition of the beautiful song.

The songs lyrics speak of the pain and longing of a dying man looking into the eyes of a woman who is so dear to him.

The two performed Elvis Presley’s Can Help Falling In Love from The King’s 1961 movie Blue Hawaii.

Matteo has additionally followed his father in covering 1956 Elvis song Love Me Tender, which was also the title of The King’s first movie.

The 23-year-old singer made his solo debut last year by singing Elton John’s Can You Feel The Love Tonight from The Lion King.

Matteo’s take on the track features on 2020 album Disney Goes Classical and is accompanied by The Royal Philharmonic Orchestra.

During lockdown last year, the rising star gave a YouTube Q&A for fans in which he talked about working with Disney.

Matteo spoke of Fall On Me featuring in the 2018 Nutcracker movie, saying: “So the first time [I worked with Disney] was with my dad. It’s been a beautiful experience because, of course, since I was a little kid he would travel a lot.”

While on the Lion King track, he added: “Now with this new experience…it’s basically the very first solo release in my career.”

“So I’m very excited and, of course, I had the chance to be honoured to sing Elton John’s song. It’s been very challenging but I hope you appreciate it.”