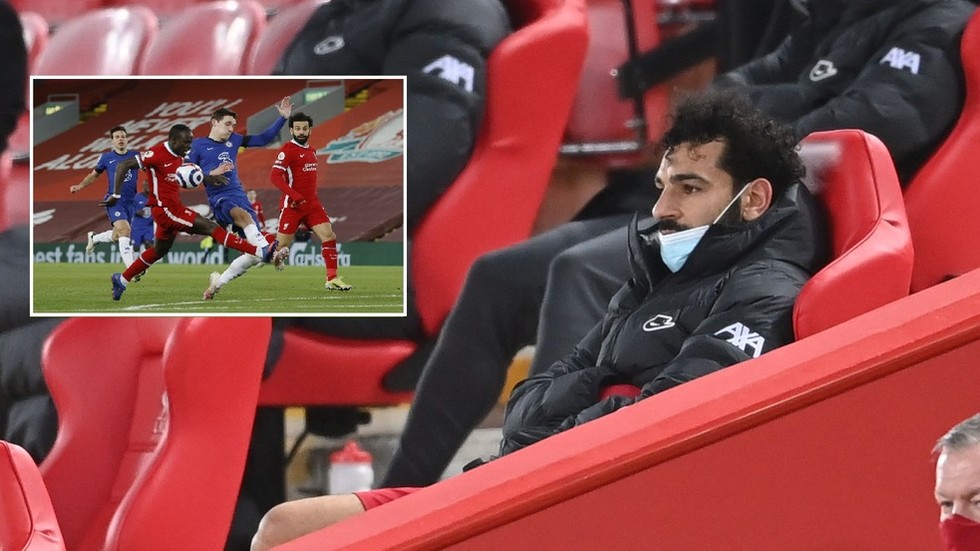 Former Liverpool and England star Michael Owen has suggested that current Reds forward Sadio Mane is not taking the opportunity to win penalties purely to deprive teammate Mo Salah of the chance to add to his goal tally.

A disgruntled Salah was hauled off in the second half of Liverpool’s 1-0 loss to Chelsea at Anfield on Thursday night – a record fifth straight home defeat for the Reds.

Earlier in the evening Salah’s strike partner Mane appeared to have an opportunity to go to ground in the box after Chelsea defender Andreas Christensen left his leg dangling dangerously in front of the Senegalese star.

Instead of taking the opportunity to ask a question of referee Martin Atkinson, Sane flicked the ball onwards and continued to the line, before Liverpool were forced away from the Chelsea penalty area and the attack broke down.

Speaking on Optus Sport, former Liverpool ace Owen claimed that Mane may have been reluctant to win a spot-kick for his team because he knew it would give Salah a chance to add his goals tally as the Reds designated penalty-taker.

“There was an occasion in the first half where every single Liverpool fan in the world probably thought ‘penalty!’ I couldn’t believe (Mane) didn’t go down,” Owen said.

“I’m not advocating he does, (but) normally you see attacking players (go down)… I just wonder whether he is thinking, ‘hang on a minute, I’m going to (try and) score, because if I don’t stand on my feet Mo Salah is going to get another penalty’.

“We all know how competitive attacking players are. We all know how selfish, in a way, strikers are. These players have been going for the Golden Boot the last couple of seasons.

“I just wonder, I might be far off the mark, whether if he was dancing around a player thinking he could get a shot off, if he is thinking ‘this is my opportunity to score’.

“The competitive nature between him and Mo Salah. It might be a wild theory, but we’ve seen them not passing to each other when one is in a perfectly better position than the other, and it just makes me wonder.

“We are talking about selfishness and (being) a little bit disgruntled, we’ve seen Salah shaking his head (when substituted), we know how much they want to win the Golden Boot, I just think a couple times there I’ve seen Sadio Mane go down there.”

Chelsea claimed a deserved victory thanks to Mason Mount’s superb 42nd-minute strike, as the Blues extended their unbeaten run under new boss Thomas Tuchel to 10 matches.

The London club stand fourth in the Premier League table on 47 points, four ahead of defending champions Liverpool who are down in seventh.
Also on rt.com Tuchel makes it 10: Chelsea’s run goes on as Premier League champions Liverpool lose five in a row at home for the first time ever
The decision by Reds boss Jurgen Klopp to hook Salah off in the 62nd minute with Liverpool chasing the game led to questions over the German’s in-game management.

Salah is his team’s top-scorer this season with 17 goals in 26 Premier League games. Mane, meanwhile, has seven goals in his 24 league games this campaign.

“I must say, I could not believe Salah came off,” Carragher said afterwards.

“Liverpool were desperate for a goal, to take your top goal scorer off was a strange one. Klopp’s never been shy of taking Salah off the pitch, so it’s not a case of he’s worried about taking his main player off and he’s taken him off in certain situations where Salah has been poor…

“He certainly wasn’t at his best today, but it wasn’t one of those games I’ve seen Mo Salah have when he can lose possession, he just didn’t have much of the ball.

“You’ve got to remember: Salah’s not a great player with the ball, as such, he’s probably better off the ball – making runs and scoring goals. What Salah is for me is a great goal scorer.”

The 28-year-old Egyptian star’s agent added fuel to the fire with a cryptic tweet shortly after Salah had been hauled off, simply posting a full-stop.

Klopp later tried to play down the row, claiming that Salah “liked like he felt the intensity” of the game.

“The reason for the sub was I could have changed other players as well but the reason was he looked like he felt the intensity and I didn’t want to risk him.

“That’s all. It’s really rare and usually Mo looks surprisingly fresh until the end. I thought he didn’t look fresh anymore. The last two or three years have nothing to do with that.”

Thursday’s loss was the latest blow for Liverpool in what is unraveling into a disastrous title defence.

Klopp’s men are a full 22 points behind league leaders Manchester City, with the German already conceding that Liverpool face a scrap simply to ensure Champions League football next season.

Next up for Liverpool are relegation-threatened Fulham at Anfield on Sunday. Chelsea host fellow top-four contenders Everton at Stamford Bridge on Monday night.