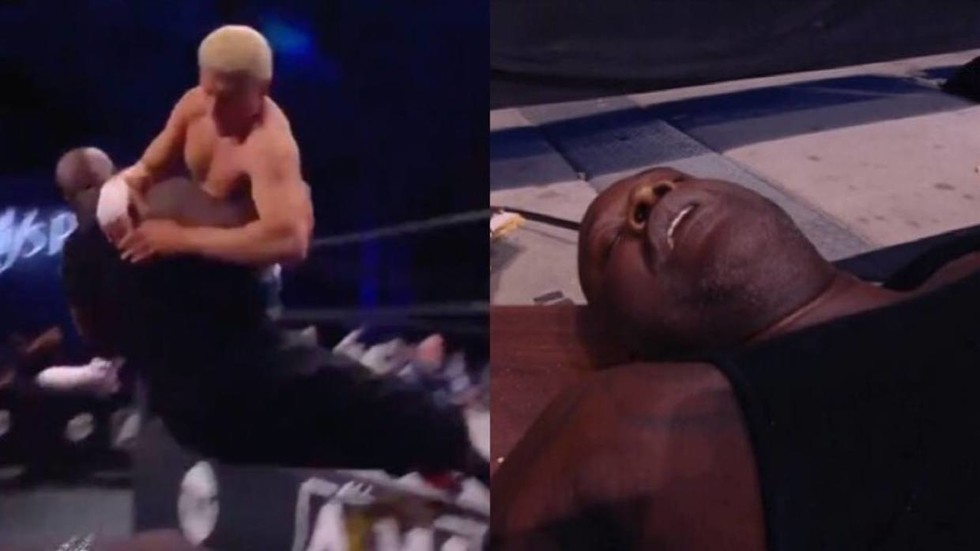 Shaquille O’Neal was stretched out into an ambulance after being sent flying out of the ring in an explosive first wrestling match with AEW Dynamite, culminating in the former NBA star being slammed violently through a table.

The basketball Hall of Famer from his time with the Los Angeles Lakers and Miami Heat teamed up with Jade Cargill to fight Cody Rhodes and Red Velvet at Daily’s Place in Jacksonville, Florida.

“I’m not a professional wrestler but I’ve been in a match before,” Shaq said before the match. “I’ve got a lot of moves in my arsenal. When you step inside somebody’s world, you have to stick to what you’re masterful at.

“I’m not acrobatic. I’m not going to be jumping off the ropes. I’m coming with the power game. When I get hands on him, I’m going to display this power.”

Shaq’s team earned a well-deserved win but their performance will be more remembered for the episode which took place at the end of the match.

The 48-year-old, who has been widely reported to be investing in the Bare Knuckle Fighting Championship that he describes as “the future of fighting”, was standing next to the ring apron when Rhodes vaulted over the ropes to deliver a decisive strike.

SHAQUILLE O’NEAL WAS LOADED INTO AN AMBULANCE ON A STRETCHER AND THEN HE VANISHED INTO FAT AIR.PROFESSIONAL WRESTLING IS BETTER THAN THAT THING YOU LIKE.

That sent the towering basketball icon flying and both athletes crashing over two tables, leaving 7ft1in O’Neal prone on his back on the floor.

Following the crash, O’Neal was seen stretched out in an ambulance. He was forced to bend his knees to fit into the car.

When wrestling commentator Tony Schiavone came to check on him later, Shaq was said to have mysteriously gone missing from the vehicle.
Also on rt.com ‘I have zero energy, zero enthusiasm’: LeBron James ‘not very happy’ as NBA superstar slams All-Star Game plans amid Covid crisis