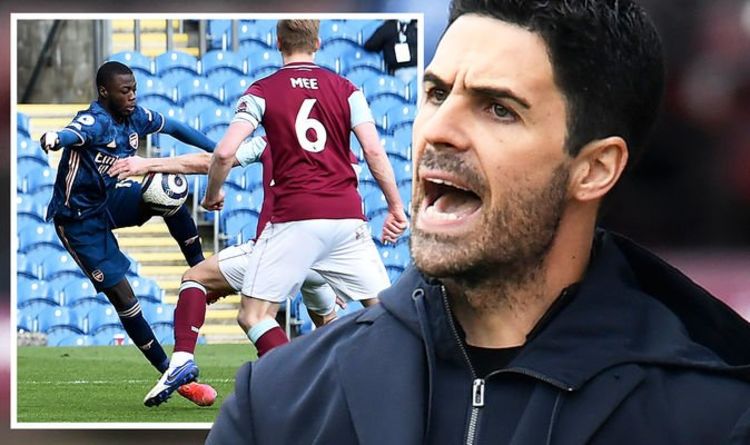 Mikel Arteta felt Arsenal were denied a “clear” and “obvious” penalty in the Gunners’ draw with Burnley at Turf Moor on Saturday afternoon – but admitted his charges can ultimately only look at themselves for not winning the game having dominated in the first half.
Pierre-Emerick Aubameyang opened the scoring inside six minutes with his eighth Premier League goal against Burnley, squeezing a shot past Nick Pope at his near post.

Arsenal were comfortably the superior side after that with Burnley struggling to match them – until the 39th minute.

Just before the break, the Clarets were gifted a way back into the game after Granit Xhaka, played into pressure by Bernd Leno, inadvertently fired the ball off of Chris Wood’s midriff and into the back of the Arsenal net.

Both sides had chances in the second-half, goalscorer Wood and substitute Nicolas Pepe squandering the best of them for either team, but could not take advantage.

Dani Ceballos struck the post in stoppage time as Arsenal threw everything at Burnley, who stood strong with a resilient defensive display to clinch a point that moves them slightly further clear of the relegation zone.

Yet the visitors were also frustrated not to have been given a penalty after Pepe tried to take the ball beyond inside the box Erik Pieters only for it to clearly strike the Dutchman’s outstretched arm.

A penalty was not awarded by on-pitch official Andre Marrinier and that decision was backed up by Kevin Friend in the VAR booth in Stockley Park, with the PGMOL explaining that a spot-kick was not given due to the proximity between Pieters and Pepe ball came into contact with the former’s hand.

But Arteta was baffled by the decision and said to BT Sport: “It’s a really tough place to come on a difficult pitch, but I have to say we should have scored the big chances we had.

“When you miss the chances we had, and you do not get decisions, it is complicated to win football games. If that is not a penalty, then someone needs to explain what one is.

“From what we produced, you have to come here and win. When you do not, you have to look at yourself. We completely dominated the first half but they make it difficult with a lot of long ball.

“We generated chances and we should have won by two or three goals. if you give any hope to any team in the Premier League, they are going to take it.”

On the comical goal that his side conceded, Arteta added: “It’s something that we work on and we’re going to keep doing.

“The first goal we scored is through Bernd, Bernd starts the whole thing then we score a goal with Aubameyang. Then we made a mistake that cost us a goal.

“But obviously when you miss the chances that we missed today, in this ground obviously you’re going to have moments where they put you under pressure and it becomes the game they want.

“Then you don’t get the decision when it is an obvious penalty, because somebody has to explain to me what a penalty is.”

Arsenal legend Martin Keown reacted on BT Sport: “It [proximity] doesn’t matter until today does it? I know the rules are going to be changed, but to me that’s definitely a handball.

Leno also agreed with Arteta and Keown post-match and said to BBC Match of the Day: “We had many big chances. I think we should have got a penalty and at the end it is only one point and I think we deserved more.

“In the second half we played too much of Burnley’s football and it doesn’t suit us or anybody in the Premier League.”

The Arsenal goalkeeper added on the Burnley goal: “We wanted to build out again because it had been working and it was very unlucky from Granit [Xhaka] but it happens.

“There is always risk to play out from the back but this is our style. I think we have more than enough situations where it works to our advantage.”

Arsenal had to settle for a point which means they will remain 10th and could end up 12 points behind fourth-placed Chelsea by Monday night, which would all but end their slim Champions League hopes once and for all.

The north Londoners’ hopes of even Europa League qualification hang by a thread with almost all of the teams above them having game in hand.

That includes rivals Tottenham, who could move seven clear of Arteta and co ahead of the derby next weekend by beating Crystal Palace on Sunday night.