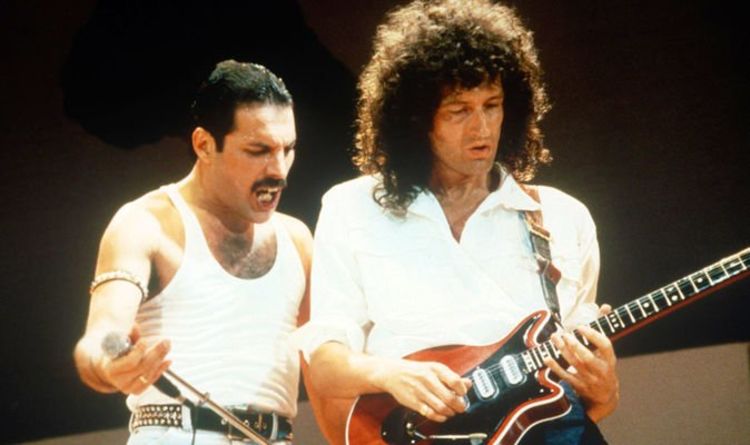 Freddie Mercury’s generosity was legendary. He carried a little black book with him everywhere and kept constantly noting down friends’ birthdays so that he never forgot a gift. He grandly flew his nearest and dearest to parties all over the world but he also paid for Christmas dinners to be delivered to AIDS patients in hospital. And yet, little is known about any gifts he gave to his Queen bandmates May, Roger Taylor and John Deacon. Until now.
Brian gave a major interview this week based around his musicianship and focussed on his many iconic guitar solos.

While he was discussing the creation of the Bohemian Rhapsody solo, he remembered a wonderful moment in the studio with Freddie during those sessions.

He said: “You know, one day Freddie had a big smile on his face when I came into the studio and he popped a cassette into the player and said, ‘Listen to this, darling. This is going to surprise you.'”

Brian said: “And what he’d done was spend the whole morning putting together all the guitar solos that he could find in the work that we’d done, and he’d strung them all together.”

Of course, this was in a time long before digital wizardry when everything had to be done painstakingly by hand, which shows how thoughtful and dedicated a friend Freddie was.

The Queen guitar legend added: “It was quite amazing… Freddie was very proud of the stuff that I’d done and that we’d done together.”

People often forget that, as well as playing air guitar while strutting his stuff on stage, Freddie was also a capable guitarist himself, which made his appreciation of Brian’s talents even more special.

Unfortunately, Brian also had to confess that the story doesn’t quite have a happy ending.

When it came to receiving gifts, Freddie’s needs were simple: “A little gift, a gesture, a nuance…means far more than someone buying you Big Ben. It is totally farcical to assume that people who have money don’t need little gestures like that, like everyone else.”

“There might be people who pooh-pooh that kind of stuff but they must be very boring types.

“Some people think you have all this wealth, so ‘What can I possibly get you as a present? You have everything so I can’t buy you anything.’ I think that’s a cop-out.

“There’s tons of things I need. I hate all those excuses. They think they can’t give you something that doesn’t cost much because it’s going to be beneath you, but that’s absolute cr*p.”

Freddie was certainly extremely generous when he gave gifts but he also spent time choosing what to get, to perfectly suit each person. Even, in fact, after he died.

Elton John described the tearful moment he heard a knock on his door at Christmas in 1991, just weeks after Freddie has passed away.

He said: “My drag name is Sharon and Freddie was Melina. In this beautiful pillowcase was this watercolour painting. The note that went with it said, ‘Dear Sharon, I saw this at auction and I thought you would love it. I love you, Malina’. You can imagine how much I cried.”

Not only was it a beautiful work of art, it was a watercolour by Elton’s favourite artist, the 19th Century painter Henry Scott Tuke.

Elton added: “He was dying and he still thought of his friends.”