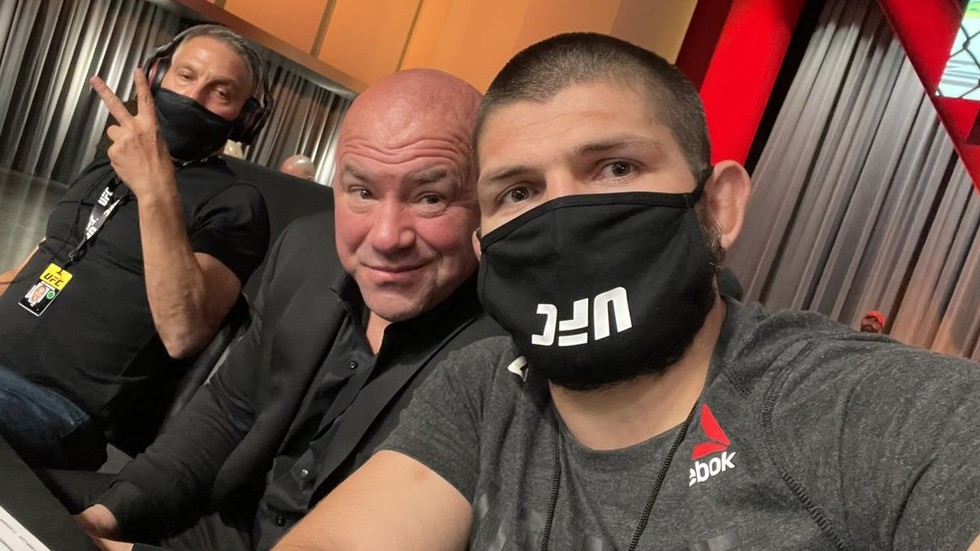 UFC president Dana White isn’t giving up in his attempts to persuade Khabib Nurmagomedov to reverse his decision to retire from mixed martial arts, telling the media in Las Vegas about his meeting with the Russian at UFC 259.

White has been vocal in his desire to have reigning UFC lightweight champion Nurmagomedov return to the cage to pursue what would be an unparalleled 30-0 record, five months after a tearful Nurmagomedov announced his decision to step away from the sport following a decisive win against Justin Gaethje.
Also on rt.com Khabib: Poirier deserves to be UFC lightweight champ, Dana White wants Las Vegas talks at end of February
The UFC boss has held several summits with Nurmagomedov designed to outline a path to the Russian’s return but despite not appearing close to a breakthrough, White certainly isn’t give up just yet.

Nurmagomedov was in attendance in Las Vegas to see his friend and training partner Islam Makhachev defeat American Drew Dober by third-round submission on Saturday – but once the business at hand was taken care of, White told the media in the post-fight press conference of his latest attempt to harangue Khabib back to the UFC.

“We did [talk]. I said, ‘Hey, how about September?'” White admitted to the media afterwards, which was met by howls of laughter from the media in attendance.

“He laughed like you did. He just laughed. That’s all he did. We’re going to go to dinner.”

White is expected to meet with Nurmagomedov again on Sunday, where he will again outline the his plan for a Khabib comeback fight. However, word which has filtered from Nurmagomedov’s camp suggests that the 32-year-old fighter isn’t exactly contemplating a return, saying recently that he has had enough of devoting his life to sport.

Speaking earlier in the week, White waxed lyrical of the state of the lightweight division once lorded over by Khabib and said that there was a range of enticing fights for the Russian should he opt to return.

“I think a lot of these fights have to play out in that division. From [number nine] all the way up to number one, they’re incredible fights,” White said.

“You can mix or match them any way you want and they’re really good fights. Let some of these play out to see who will fight next for the title. I think if Khabib is interested, he’ll take the fight.

“You don’t see Khabib saying, ‘Leave me alone. Stop asking me’. So there’s still a chance. That’s the way I look at it.”
Also on rt.com UFC 259: Dominant Makhachev calls out Tony Ferguson after defeating Dober to extend winning streak to SEVEN in a row
But the longer that White’s protracted pursuit of Khabib continues, the less likely it is to see success. In what has amounted to a very high-profile staring contest between two of the most powerful figures in mixed martial arts, Khabib doesn’t look like he will be the first to blink – but that isn’t going to stop Dana White from trying.