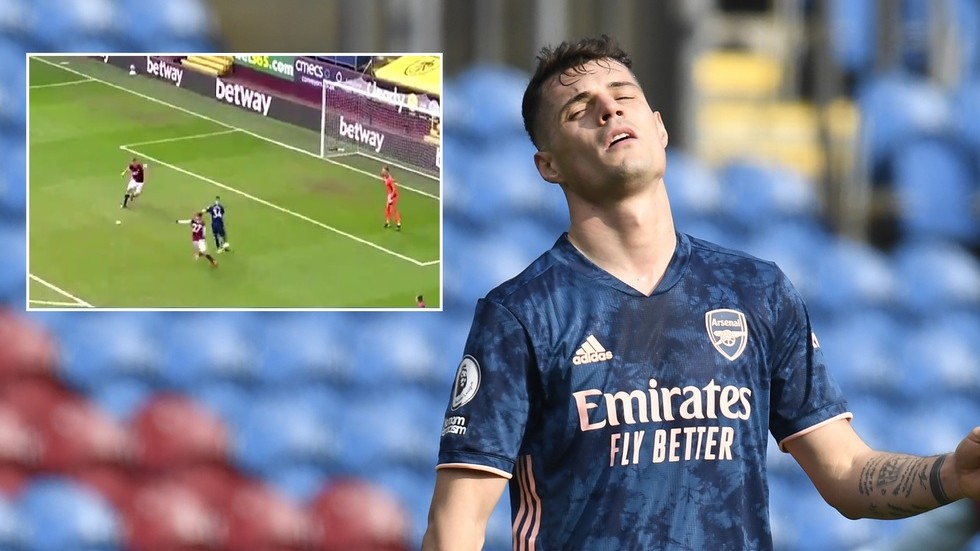 Arsenal’s Granit Xhaka committed one of the blunders of the season as he inexplicably gifted Burnley an equalizer in their Premier League clash.

With Arsenal leading 1-0 at Turf Moor thanks to Pierre-Emerick Aubameyang’s clinical finish after six minutes, Burnley were handed a way back into the game following a scarcely-believable act of generosity from Swiss international Xhaka.

Heading towards his own goal to collect a pass from Arsenal ‘keeper Bernd Leno, the midfield man took a touch under pressure before attempting a pass across the box to teammate David Luiz – only to pass the ball straight at Burnley striker Chris Wood.

From there the ball bounced off Wood’s midriff and past a helpless Leno and into the Arsenal net to level the scores at 1-1 with 39 minutes gone.

Stunned Arsenal fans soon took to social media to label the blunder from Xhaka “the dumbest defensive moment of the season.”

A disaster at the back for Arsenal results in a gift of a goal for Burnley 🎁Chris Wood will never score an easier goal in his life! pic.twitter.com/h4jYPBebWN
— Football on BT Sport (@btsportfootball) March 6, 2021

For the unfortunate Xhaka it was his eighth mistake leading to a goal since the start of the 2016-17 season – the most of any outfield player in the league.

Watching on from the TV studio, an incredulous Jeff Stelling said he had “never seen anything like it in the Premier League.”

“I’ve never seen anything like that in Premier League football.” 😳Here’s how the Soccer Saturday panel reacted to Granit Xhaka’s nightmare at the back for Arsenal…👻 pic.twitter.com/lXOSPwoNEq

Some fans, however, defended the 28-year-old star, claiming fatigue may have been a factor or that Leno shouldn’t have played him the ball in such a confined space.

I’m not excusing Xhaka’s mistake as that was a really poor moment from him. But this is his 13th back-to-back start since Jan 15th. He completed 90 minutes in each of the previous 12 games. Zero rest for him because we don’t have great alternatives. Need to bring in another CM.

That excuse is unlikely to wash with many, however, with Xhaka already enduring fraught ties with the Gunners faithful after appearing to tell fans his own fans to “f*ck off” in a particularly unsavory incident back in October of 2019.

The star was branded a “disgrace” for his actions on that occasion, and later lost the Arsenal captaincy.

At the start of play on Saturday, Mikel Arteta’s team were languishing in 10th in the Premier League table and were bidding to pick up three points against Burnley which would lift them ahead of Aston Villa in ninth.
Also on rt.com ‘Utter disgrace’: Arsenal fans fume after captain Xhaka ‘tells own supporters to f*ck off’ before ripping off shirt (VIDEO)