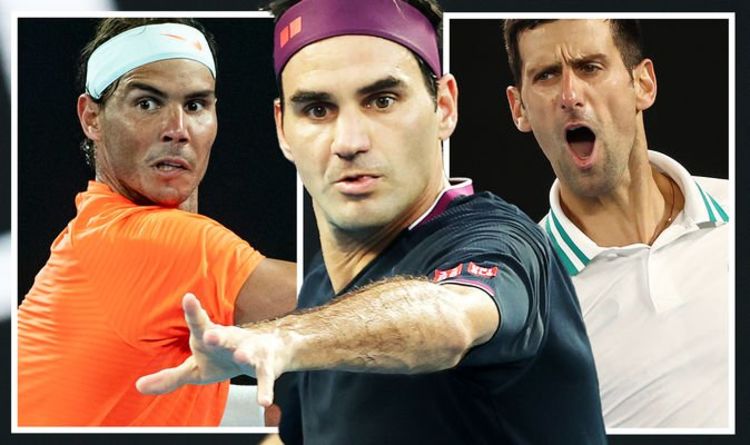 Roger Federer is confident his story in tennis is “not over yet” in a pointed message to long-time rivals Rafael Nadal and Novak Djokovic. Federer returns to the court for the first time in 14 months at the Qatar Open in Doha, taking on the winner of Jeremy Chardy vs Dan Evans in the second round.
Federer has not played since the 2020 Australian Open semi-finals when he lost in straight sets to Djokovic on the Rod Laver Arena, having since undergone two knee surgeries.

During his time off the Swiss icon has watched Nadal join him on 20 Grand Slams while Djokovic’s third straight triumph in Melbourne moves him on to 18.

Both are expected to surpass Federer’s tally but the 39-year-old is plotting more major success, having not added to his haul since winning in Australia three years ago.

Federer came devastatingly close to a 21st Slam at Wimbledon, where he is a record eight-time winner, in 2019 but wasted two championship points against Djokovic to lose a five-hour thriller.

And it is SW19 where Federer wants to be back at his best this year as he slowly looks to improve his condition to be at 100 per cent for his favoured grass-court tournament.

“At this moment I feel like it’s about: Let’s see how matches go. Let’s how see training goes with all the top guys and professional players, not just sparring partners,” Federer said ahead of his return in Doha.

“I was playing a lot of two-on-ones the last few months and so forth. I know I need to go back to training after here again.

“From this standpoint, it’s still building up to being stronger, better, fitter, faster, all that stuff. So, I hope by Wimbledon I will be 100 per cent and from then on the season really starts for me.

“Everything until then, let’s see how it goes. I might surprise myself, which I have actually already done in practice the last three weeks.

“I was surprised how well it did go. Like we know matches are a different animal. Right now, I take it day-by-day, happy I am back on the Tour again, and see how things go.

“For me, everything starts hopefully with the grass, yeah.

“I just feel like the story’s not over yet. I don’t know how to explain. It’s not like for one particular reason why I wanted to keep on playing tennis other than I enjoy playing tennis, I enjoy being on the road.
“That will all be checked and tested this year with bubble life, quarantine all around. The whole mask situation. Travel is difficult. Rehabbing and all that stuff is not complete yet, you know?

“So I’m still a work in progress. Probably one of the reasons is that I would like to get the high again of playing against the best players, playing the biggest tournaments.

“Winning them, hopefully, and winning the best tournaments. Hopefully I will play long enough to see full crowds again.

“That will be a nice thing as well and we all hope for that. But for me it was just more like the knee was not good anymore, I’m not happy with it and it needs to be fixed.”

Asked about his second keyhole operation on his right knee, Federer explained: “It came about just like that.

“I would go for a walk with the kids and my knee would swell up, which surprised me because training had gone well for the first few weeks. This is a moment when you question yourself a little bit more.”

Speaking after landing in Doha, 103-time tour-level champion Federer – who is six titles off matching Jimmy Connors’ all-time record – spoke of his excitement about getting back on to the court.

“It’s been a year since my last travel to any event and I’m very excited,” the Qatar Open second seed, who could face Dominic Thiem or defending champion Andrey Rublev in the final, said.

“This is the moment where I could maybe thank all the people involved who made this possible. It’s been a long and hard road.

“I know I’m not at the finish line yet, but it’s good. I feel like I’m in a good place, I’ve been practising very well.

“Hope you guys also are going to tune in to watch it and I hope I see you again very soon. Take care everybody.”