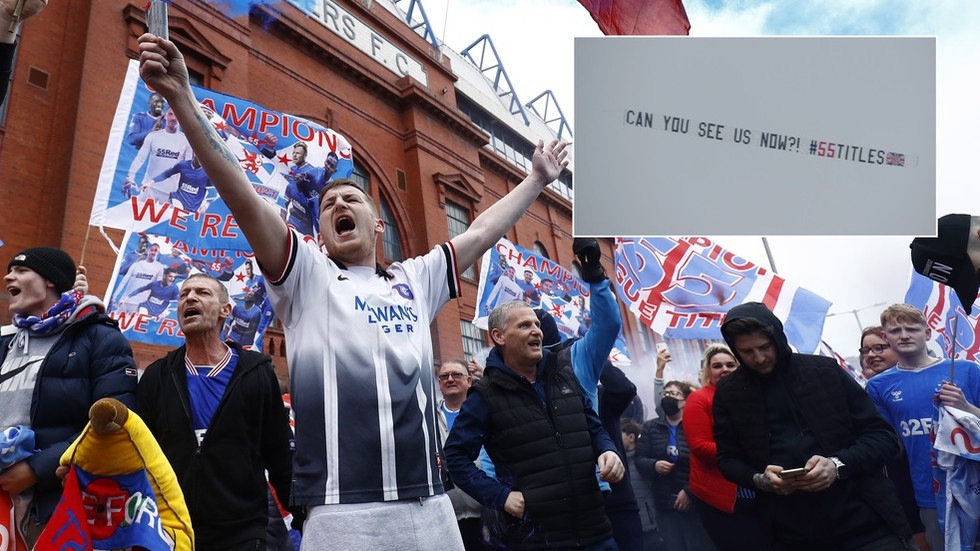 The blue half of Glasgow is celebrating today after city rivals Celtic floundered to a 0-0 draw with Dundee United to hand their arch-rivals Rangers their first Scottish Premiership title in a decade.

Steven Gerrard’s side have ended their 10 year drought for honors after beating St. Mirren 3-0 on Saturday which, coupled with Celtic’s goalless draw at Tannadice, was enough to confirm Rangers’ return to the summit of Scottish football after establising an insurmountable lead of 20 points with just six games remaining.
Also on rt.com WATCH: Overjoyed Rangers fans flout Scotland lockdown rules as they stand on brink of first title in 10 years
It is former Liverpool skipper Gerrard’s first trophy of his managerial career after three seasons in the Ibrox hot seat, and scuppers Celtic’s bid for 10 successive top division titles in the process.

In truth, the writing had been on the wall for some time. Celtic’s miserable form this season led to the boss Neil Lennon resigning last month amid their limp attempts at defending their crown – but even a fully-functioning Celtic side would likely have struggled this season with Rangers winning an impressive 28 of their 32 league games thus far, while shipping just nine league goals in the process.

And proving that the rivalry between the two Glasgow foes is as robust as ever, some opportunistic Rangers fans attempted to heap further pressure on Celtic ahead of their game on Sunday bu flying a banner over the stadium which asked, “Can you see us now?” while also reminding Celtic supporters that they were on the verge of a record 55th Scottish league title.

Celtic, meanwhile, remain a few rungs below on 51 league titles.

HE’S DONE IT 👏Steven Gerrard wins the first league title of his career with Rangers 🏆The first manager in 10 years to stop Celtic from winning the SPL title 👏 pic.twitter.com/7vOgFUbeL0
— ESPN FC (@ESPNFC) March 7, 2021

However, a host of Celtic fans have pointed out that this technically is only Rangers’ FIRST league title – after the club was liquidated and reformed in 2012 due to financial improprieties.

Spent more money hiring a plane than saving their club from Liquidation 🤣Copying an idea used by Celtic fans way back in the 90’s. Not an ounce of originality in their small brains.

To avoid confusion, it’s their first title , this tribute act was formed as The rangers in 2012.

The league win signals a remarkable turnaround for Rangers who were thrust into the bottom division of the Scottish football pyramid in 2012 as punishment for an extreme financial collapse which threatened the future of the famous club.

They subsequently worked their way back up the leagues and regained status in the Scottish Premiership just five years ago where they were forced to endure Celtic’s prolonged success which they carved out in the absence of their one true historical rival for league titles.

And they will have another opportunity to rub it in when they play their game as coronated champions in the third ‘Old Firm’ game of the campaign on March 21 at Celtic Park.
Also on rt.com ‘Dangerous fake news’: Celtic slam Sky Sports after broadcaster mistranslates interview to include allegation of racial abuse