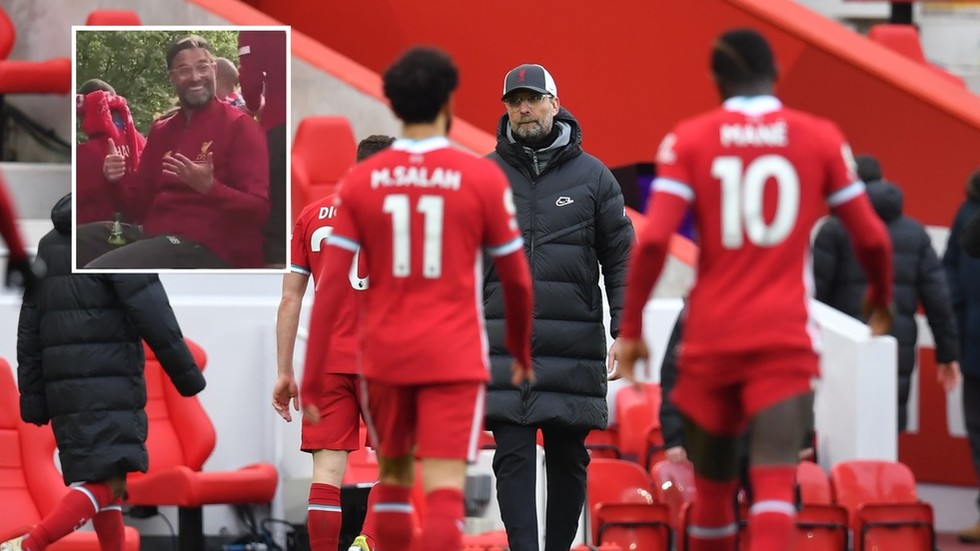 Jurgen Klopp’s dreams of a second successive Premier League title have turned into a nightmare after his team suffered their SIXTH home defeat in a row after another Anfield slump, this time against relegation-threatened Fulham.

While some fans may have been wary of saying it out loud, there is now no doubt that the wheels have well and truly come off Klopp’s Liverpool juggernaut after the German’s injury-ravaged team dropped three more home points to Scott Parker’s side to mark their worst run of league form since the 1951-52 season.
Also on rt.com ‘Have you completely lost your minds?’: Fans react as Jurgen Klopp is made ODDS-ON to be next Premier League managerial casualty
A Mario Lemina strike towards the end of the first half was enough to seal a famous three points for the Londoners after the Gabonese international seized on a mistake from Mo Salah to squeeze the ball inside Alisson Becker’s right-hand post.

Liverpool made seven changes from the side which lost 1-0 at Anfield to Chelsea on Thursday with the likes of Diogo Jota, Naby Keita and Xherdan Shaqiri drafted into the side – but any hopes that an injection of new blood into the starting lineup may help eradicate their recent woes proved unfounded as the Reds appeared weary and listless throughout.

And as you might have expected, fans on social media didn’t go easy on them.

Incredibly, Liverpool had gone 68 home league matches without defeat before beginning their run of defeats against Burnley in January. Since then they have emerged from games at Anfield with Brighton, Manchester City, Everton, Chelsea and now Fulham without a single point to show for their efforts.

This time a year ago, Liverpool went 22 points clear at the summit of the Premier League table after a home win against Bournemouth as they marched towards their first Premier League title in three decades – but just 12 months later, Liverpool’s form is among the worst in the English top division and they risk missing out on Champions League qualification altogether.

How bad are Liverpool at the moment ?

Marvellous result for @FulhamFC as the struggles for @LFC continue. The mid-season collapse is one of the most surprising things I’ve seen in football…and I’ve seen a few. Extraordinary.

The negative statistics keep piling up, too. Liverpool have yet to score a home goal from open play this year while it is now fourth months since they kept a clean sheet at their previously impenetrable home ground.

And in a season which promised so much, nowadays Liverpool must arrest the decline into mediocrity – after all, the last time this happened it was another 30 years before they won the league again.
Also on rt.com Ex-Liverpool star Owen offers ‘wild theory’ on why Mane didn’t want to win penalty for Salah against Chelsea