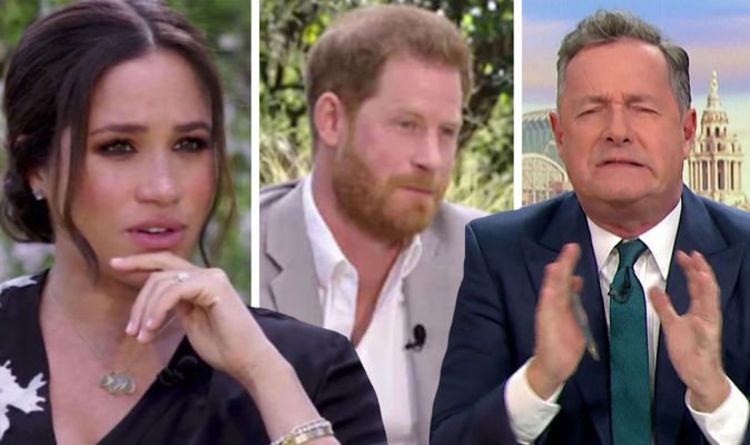 It’s not been four hours since Meghan and Prince Harry’s sit down interview with Oprah Winfrey aired in the US and Piers Morgan, 55, has already called for this years Oscars ceremony to include the Duke and Duchess of Sussex in their list of nominees. The Good Morning Britain star is the pair’s most fiercest critic, and has come under fire a lot for his treatment of them.
Following last night’s interview, Piers took to Twitter to state GMB are “going to need a longer show” and to nominate Meghan for an Oscar, suggesting her thought-provoking interview was all an act.

“Is it too late for Oscar nominations? #meghan,” he penned online.

Very quickly fans (or not so much fans) replied with their own thoughts on his opinion, with one encouraging the presenter to let it go.

“Seek help, your obsession with her isn’t healthy,” they wrote.

Another agreed: “Mate I like you but the Meghan thing is just not worth dragging out. leave them be and get on with the real news, vaccines, holding ministers to account, our NHS and key workers. Grilling Meghan and Harry 24/7 is not worth your time.”

A third added: “The obsession is starting to look rather unhealthy!!”

“I was wondering when you would chime in,” a fourth sighed.

But others found his most recent jibe funny, with some joining in on the joke.

The actor rushed to her defence in a Twitter statement, praising her over her navigation of a what he perceives as an “archaic and toxic” family dynamic.

“From day one she was an enthusiastic, kind, cooperative, giving, joyful and supportive member of our television family,” he wrote.

He continued: “She fell in love, moved to a new country, became a household name across the entire globe and began the difficult work of trying to find her place in a family dynamic that can at best be described as complicated and at worst, seemingly archaic and toxic.”

But the GMB star responded to his series of tweets where he defended their joint interview with Oprah, saying: “Actually, what’s ‘OBSCENE’ is your friend trashing her husband’s family on global TV as the Queen’s 99-year-old husband lies in hospital.