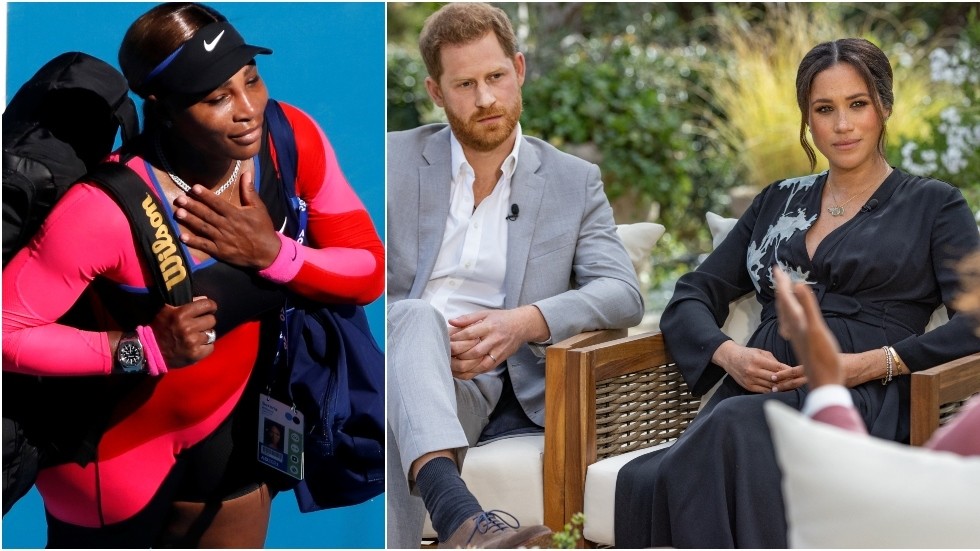 Tennis icon Serena Williams has come out in support of Meghan Markle after the former actress gave an explosive interview to Oprah Winfrey in which she accused the UK Royal Family of racism and said she had contemplated suicide.

In a lengthy interview alongside husband Prince Harry, Markle – also known as the Duchess of Sussex – claimed members of the Royal household had expressed concerns over how “dark” the color of her son Archie’s skin would be, and revealed she had suffered times when she “didn’t want to be alive anymore.”
Also on rt.com ‘Concerns about how dark his skin might be’: Meghan drops racism bombshell on why UK royals didn’t want her son to be prince
American tennis icon Williams has now spoken out in support of her close friend.

“Meghan Markle, my selfless friend, lives her life – and leads by example – with empathy and compassion,” Williams wrote in a message on her social media platforms.

“She teaches me everyday what it means to be truly noble. Her words illustrate the pain and cruelty she’s experienced.

“I know first-hand the sexism and racism institutions and the media use to vilify women and people of color to minimize us, to break us down and demonize us.

“We must recognize our obligation to decry malicious, unfounded gossip and tabloid journalism. The mental health and consequences of systemic oppression and victimization are devastating, isolating and all too often lethal.”

Meghan and Harry’s interview with US TV queen Oprah has split opinion in the UK, with some defending the pair over their decision to go public with the supposed hardships they have endured as part of the Royal Family.

Others – including TV provocateur Piers Morgan – have called the pair pampered and self-centered, accusing them of whining.

“This interview is an absolutely disgraceful betrayal of the Queen and the Royal Family. I expect all this vile destructive self-serving nonsense from Meghan Markle – but for Harry to let her take down his family and the Monarchy like this is shameful,” Morgan fumed on his Twitter account.

This interview is an absolutely disgraceful betrayal of the Queen and the Royal Family. I expect all this vile destructive self-serving nonsense from Meghan Markle – but for Harry to let her take down his family and the Monarchy like this is shameful. #OprahMeghanHarrypic.twitter.com/F2QDxELSsr
— Piers Morgan (@piersmorgan) March 8, 2021

Williams, a 23-time Grand Slam winner, has unsurprisingly stood by her friend.

The pair reportedly first met in 2010 but their friendship has developed over the past six years in particular.

Meghan has been seen supporting Williams from the stands at Grand Slams, while the tennis star and husband Alexis Ohanian attended Meghan and Harry’s royal wedding in 2018.

Williams also co-hosted Meghan’s baby shower before the birth of Archie in 2019.

In their interview with Oprah, the former Suits actress and Harry revealed that the second child they are expecting later this year will be a girl.

Williams, who has a three-year-old daughter Alexis Olympia, referred to the news in her message of support.

“I want Meghan’s daughter, my daughter and your daughter to live in a society that is driven by respect,” Williams wrote.

“Keep in your memory the fruitage of the spirit is love, joy, peace, long-suffering, kindness, goodness, faith, mildness, self-control. Against such things there is no law.

“I am so proud of you for being so brave. I know it is never easy. You are strong – both you and Harry. I love you. I adore you. Your friend S.”

Williams’ tweet had racked up around 100,000 ‘likes’ within just a few hours and prompted further messages of support in the comments.

“As always, well said,” read one response, while another wrote Williams was “an example to women.”

But just as with the broader debate in Britain and beyond, others adopted a staunchly opposing view.

“What systemic oppression and victimization does she face, exactly?” questioned one Twitter user.

“God, how hard it must be to be a millionaire royal today. If she didn’t want publicity, it’s not too hard to keep quiet. But no, she runs for attention. the only thing Meghan’s a victim of is her own narcissism.”
Also on rt.com #AbolishTheMonarchy trends after Meghan’s tell-all with Oprah sparks Twitter revolt