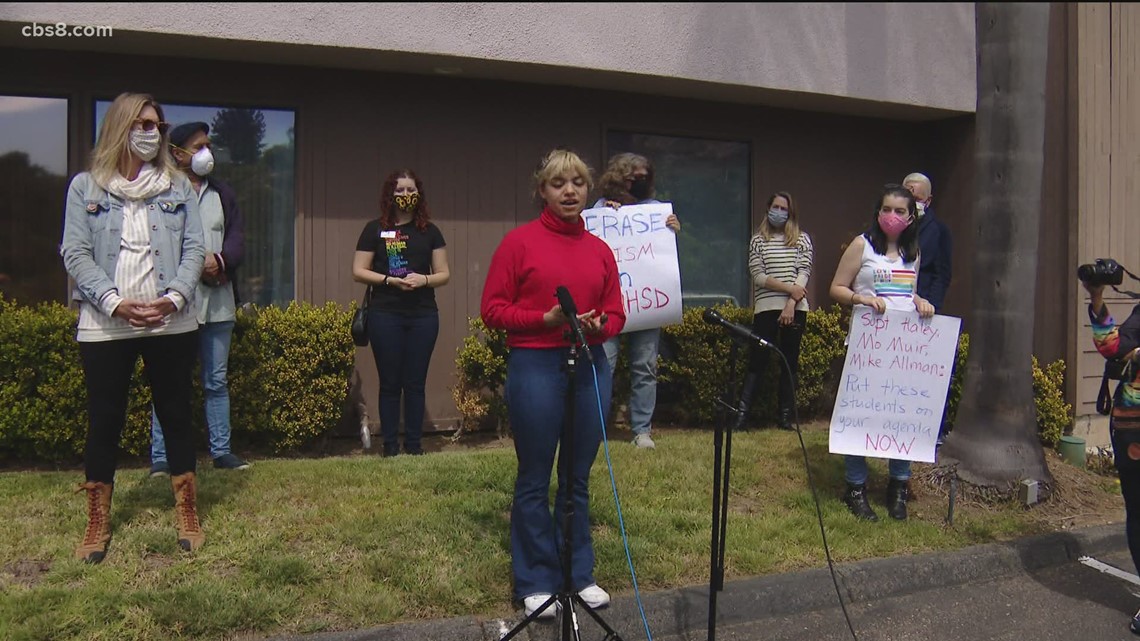 “You are expected to see sexual assault at dances. You are expected to hear stories of girls, of boys, of anyone being hurt not getting the help they deserve,” said La Costa Canyon High School senior Isobel Ramos during a rally held Wednesday outside district headquarters in Encinitas.
Ramos was among several people who spoke out at Wednesday’s rally, accusing district officials of turning a blind eye.
“Now imagine being a closeted high school student hearing someone say they proudly hate lesbians and no one does anything about it,” said La Costa Canyon senior Sydney Weaber.
A similar rally was held back in August, yet those who spoke out this latest rally, including teachers, say despite their attempts at being heard, nothing has changed.
RELATED: Encinitas students protest alleged discrimination at high school district
A picture shared with News 8 showed a swastika on La Costa Canyon’s campus, one of several concerning incidents that have allegedly gone on for months.
“There are many of us who want to protect our students and speak up against what’s happening, but either feel like we’re not given the tools, the support, or fear retaliation to do so,” said La Costa Canyon teacher Haley Mackenzie.
They’re asking district leaders for solutions including:
“We aren’t in a safe environment here and all we want is the training and the listening that we’re missing,” said Ramos.
In response, a district spokesperson released a statement, reading in part:
“The San Dieguito Union High School District takes seriously and school site administrators investigate all reported allegations of racism, bullying, and sexual assault or harassment. The student voice is an important avenue for reporting racism, bullying, or sexual assault/harassment, and we encourage our students to work collaboratively with site administrators if there are specific incidences to investigate.
We are blessed to serve a diverse community within SDUHSD, and we strive to make sure all of our students feel safe and included on our campuses. The district is committed to making sure that equity is intersectional – race, gender, culture…for all of the “isms. At our next scheduled Board meeting, the district has prepared a contract for approval to partner with the San Diego Office of Education, to facilitate a Continuous Improvement Equity Model with district and site staff for Spring 2021 through 2021-2022 school-year. Through this process, we look to expand and enhance our efforts to identify areas of racism and inequities within the district to continue to transform our schools into places of opportunity for our most vulnerable youth.”
RELATED: Inside the demand for substitute teachers in San Dieguito Union High School District
RELATED: Some San Dieguito Union students protest planned return to on-campus learning