Some six months on from its initial release on PS4, Xbox and PC, Kingdoms of Amalur: Re-Reckoning, THQ Nordic’s “remaster” of 2012’s action-RPG epic, finally arrives on Nintendo Switch, bringing with it a solid hundred hours’-worth of high-fantasy shenanigans. While it’s more than showing its age in many respects – and certainly isn’t the most impressive of enhanced re-releases we’ve come across in recent times – what’s here still manages to entertain on account of a combat system that’s as much knockabout fun now as it was nine years ago.

If you’re expecting to jump into Kingdoms of Amalur: Re-Reckoning and be greeted by an impressive ground-up remaster of the Faelands – a complete and total graphical overhaul that breathes new life into every corner of the Plains of Erathell, Alabastra and the floating city of Idylla – well, prepare to be a more than a little disappointed. This is an enhanced edition of a near-decade-old game that, especially on Switch, is pretty much indistinguishable from its source material in terms of presentation. 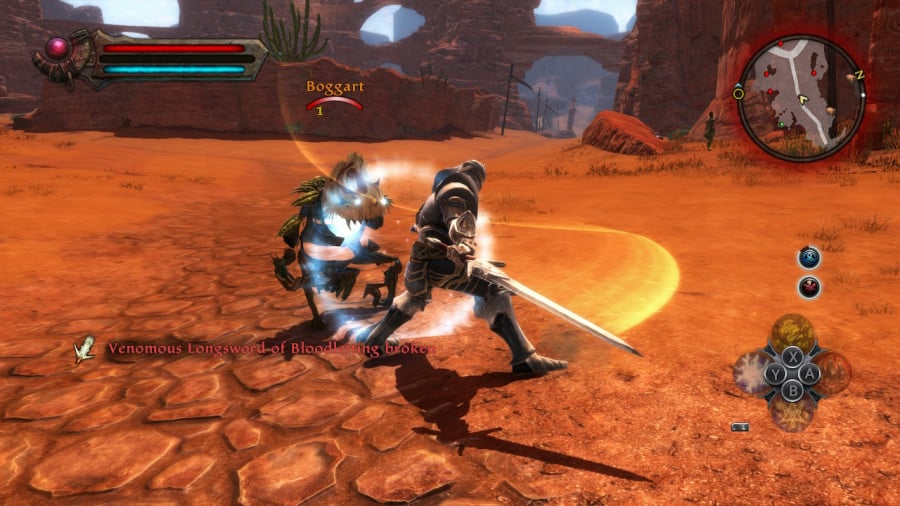 In fact, the only real big banner additions here, beyond slightly retouched textures, are the inclusion of an all-new “very hard” difficulty that adds some much-needed challenge to enemy encounters, reworked loot generation and map zones that now level alongside your character in order to allow the game’s combat to flow more fluidly as you blast around its semi-open world. Important stuff, no doubt, and changes that help the flow of the game, especially in the latter stages of the campaign, but hardly what we’d call a remaster.

Even though, beyond this handful of small tweaks and additions, very little of real note has changed on a technical or aesthetic level, Kingdoms of Amalur: Re-Reckoning scrapes by on the strength of its sword-swinging, perfect-parrying, Chakram-wielding action. Back in 2012, this cult classic’s combat was genre-defining stuff that wiped the floor with most of its competitors and, all this time later, the action side of things still holds up.

Levelling-up your character, investing points into the three available skill trees – Sorcery, Might or Finesse – and unlocking all manner of melee/magical moves in order to dish out damage to the Barghests, Boggarts and Banshaens that stand between you and your destiny is just a great time; satisfyingly crunchy hack-and-slash stuff that’s as addictive as it is surprisingly expansive. The Faelands are also a loot fiend’s dream, with a seemingly endless supply of suitably fantastical armour, weapons, rings and baubles to get your sweaty hands on as you blaze through its dungeons, deserts, forests and deadlands. 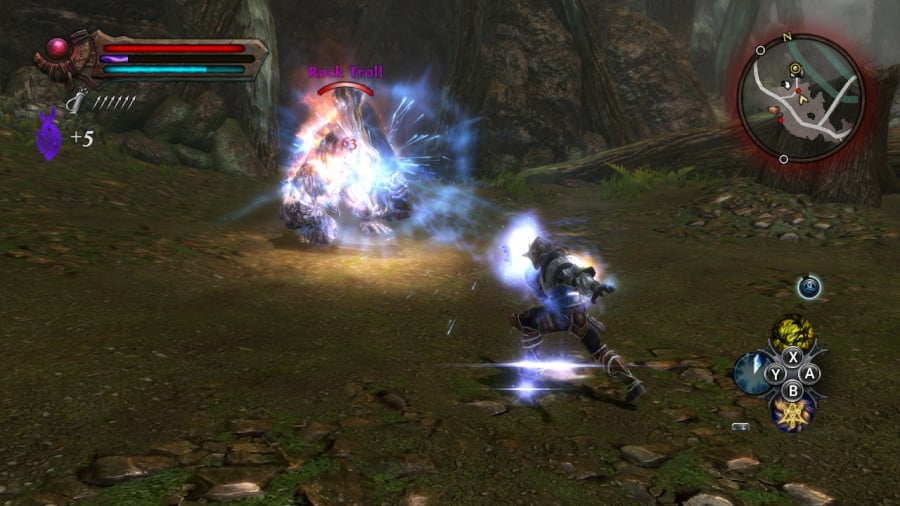 The new very hard difficulty mode, on which we played through the game for this review, really does help to reinvigorate the combat too, giving it a real edge and forcing you to consider your enemy’s abilities lest you get overrun and done-in before you know what’s happening. You’ll need to time your attacks more when playing at this harder level, take a moment to consider your armour, weapons and stocks of potions and put just that little bit more thought into your skill purchases and overall character build – a build that can be freely re-specced at any time – before blasting into battle. It’s no Demon’s Souls, you’re not going to find yourself pulling your hair out during a boss battle or grinding in order to gain the strength required to pass through an area, but it certainly gives things a lift over a default difficulty setting that was often called out as being just a little bit too easy.

Of course, for a game of this vintage, things aren’t all completely golden with regards to the combat at hand here; it can be pretty repetitive stuff, stealth is an absolute bust, enemy types are repeated ad nauseam throughout areas, there’s no ability to lock-on to individual foes and the AI is definitely of the “me no think, me attack” school of warfare but, overall, it’s aged remarkably well and, at this point, really is the one thing propping up the rest of a game that’s more than beginning to show its age.

Indeed, away from the action side of things, the ravages of time have not been so kind to the Faelands. This is a game whose old-fashioned semi-open world now feels rather unimpressive in comparison to the truly open, dynamic, living and breathing creations seen in more recent RPG offerings. The various locales through which you’ll venture here may hit all the right high-fantasy architectural notes and are certainly more than colourful enough but, besides the enemies you’ll find hanging around in the exact same places every time you pass by, they’re very noticeably barren affairs with barely any signs of life to be found as you make your way through the samey corridors and rather small open spaces that connect the game’s main metropolitan areas. Towns and villages do fare much better with plenty of NPCs dawdling around and giving the impression of activity, but they’re still very much of their time, stood about only to dish out pretty tiresome side missions that, more often than not, involve fetching some item or other or defeating a certain number of beasties nearby. 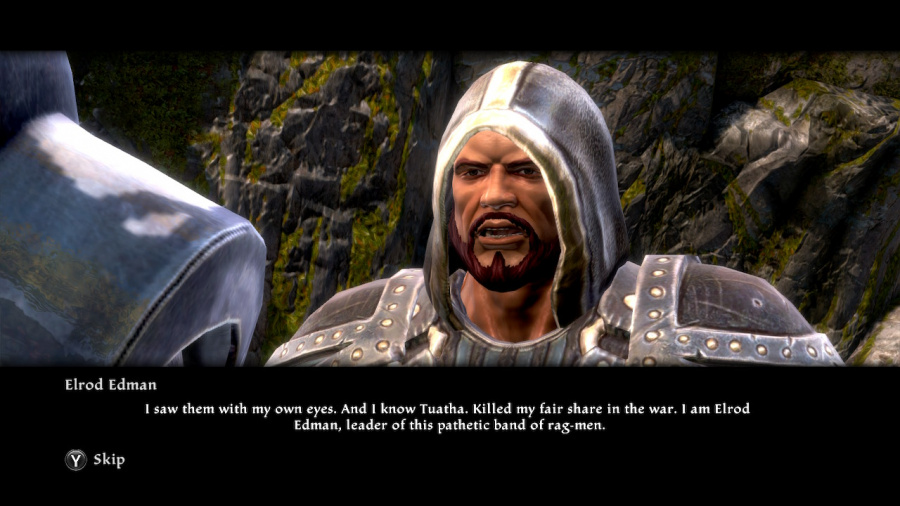 On a slightly more positive note, there’s plenty of voice-acting – a surprising amount in fact, with pretty much every NPC engaging you with either a bad Scottish accent or a terrible Irish one – but again, a lot of it feels pretty tired, with lots of chronic delivery and mountains of lore dumped upon you unceremoniously should you make the mistake of enquiring about any aspect of Amalur’s history, factions or belief systems. For an enhanced version of a pretty old game, we were also rather disappointed to see little to no effort afforded to cleaning up the game’s original old menu systems. They’re not a complete and utter nightmare, let’s be clear, but they are clunky, and doing anything, even just switching up a weapon (something you’ll do hundreds of times on account of the tons of loot this game throws your way) takes far more time than it needs to as a result. It’s a real shame that elements of the experience that could have so easily been refreshed, streamlined and modernised were just left in their original state like this, dragging the already rather archaic core experience ever further down.

Graphically, for a Switch port, well… Kingdoms of Amalur: Re-Reckoning probably gets away with its rather barebones pimping of the original release’s aesthetics much moreso here than it does on other, more powerful, systems. We’re used to suffering some pretty huge graphical downgrades in order to get things up and running on Nintendo’s console, but that’s not the case this time around and, although it may not have the exact same level of crispness in its slightly reworked textures as other versions, what’s here is certainly close enough and manages to look good in both docked and handheld modes whilst performing pretty well to boot – give or take a few unfortunate graphical glitches and framerate drops during boss fights and busy battles. In fact, our biggest issue in terms of performance on Switch is with its loading times which can be pretty long at points, something which grows fairly tiresome as entering and exiting every single building and dungeon in the Faelands requires a certain amount of waiting around as a result. 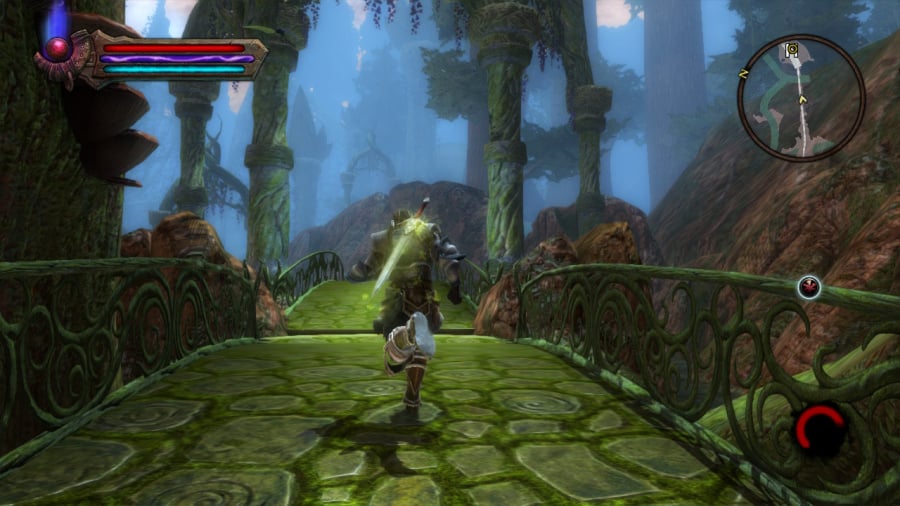 Before we forget, we should give a special mention to former Rare composer Grant Kirkhope’s amazing soundtrack, which is one element of the package that hasn’t aged a jot. It’s perfectly suited for the on-screen action, packed with rousing tunes that get the blood pumping at just the right moments.

Overall then, Kingdoms of Amalur: Re-Reckoning on Switch is a pretty mixed bag; a fairly barebones enhanced edition that manages to include all previously released DLC, makes a handful of worthwhile tweaks and technical changes, but then fails to do such simple things as fix up its archaic menus, deliver a completely consistent 30fps or crush a number of other graphical bugs and loading time issues that we’d really expect to see taken care of in a revamped version of a nine-year-old game. What’s here is still a fun enough adventure – make no mistake, Amalur is packed full of secrets, dungeons and loot and its rather hackneyed story and rote side quests are bolstered to no end by some cracking combat – but it’s also an adventure that’s very much of another time.