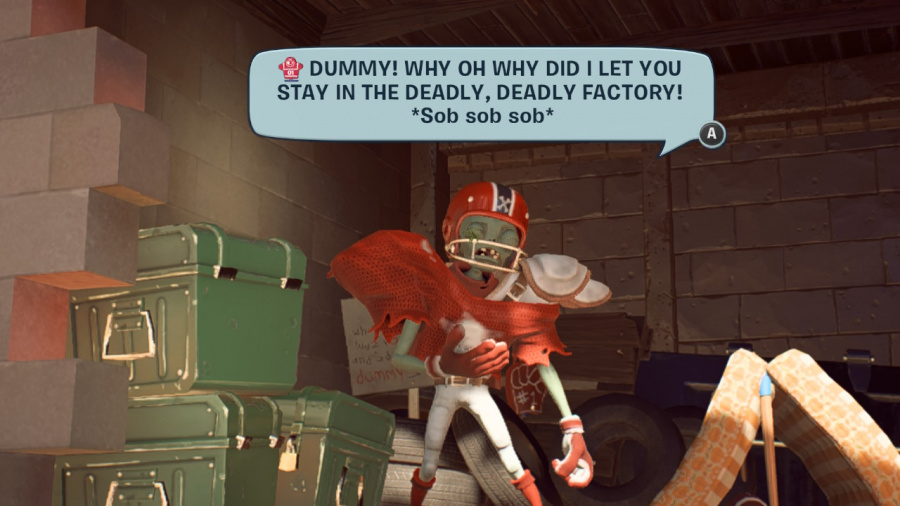 It’s been a long and weird road for the Plants vs. Zombies franchise. What began as a simplistic and quirky tower defence title eventually led to the creation of a surprisingly high-quality shooter spin-off series. The latest release in this series, Plants vs. Zombies: Battle For Neighborville, originally saw its debut on other platforms in late 2019 and post-launch support lasted for about a year before the developers chose to move on.

Now, all that extra content has been added into the base game and all the microtransactions have been pulled out, giving us the fittingly titled “Complete Edition”. Plants vs. Zombies: Battle For Neighborville isn’t necessarily anything groundbreaking for the hero shooter genre, but it contains more than enough well-designed and engaging content in both single-player and multiplayer to be well worth looking into.

The premise of Plants vs. Zombies: Battle For Neighborville is fittingly goofy, as it follows the endless struggle between an endless horde of zombies desperate for human brains, and the legion of garden plants which the humans have employed to fend off the hordes. A central narrative isn’t really present here in the offline mode, rather you just sort of bounce around between various wacky characters to fulfil basic requests for them. Humour is obviously a big part of the experience and it straddles that blurry line between cheesy Saturday morning cartoon jokes and cringe-inducing ‘holds up spork’ gags. 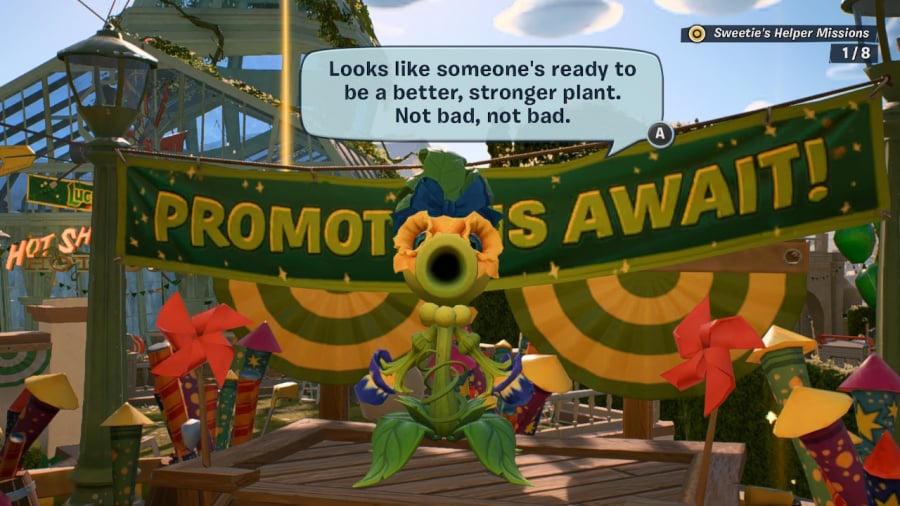 Whichever game mode you choose, Plants vs. Zombies: Battle For Neighborville never strays too far from its hero shooter premise. Each team has a dozen characters that cover a variety of roles, such as Attack or Defence, and have predefined kits that nicely mark out some strengths and weaknesses for each character. The Foot Soldier Zombie, for example, can put out a decent amount of damage and do so from a safe distance, but they’re rather squishy and melt quickly under sustained enemy fire. Classes are somewhat mirrored between the two teams, but there are some subtle differences to differentiate them a bit. For example, the Peashooter (the Plant version of the Zombie Foot Soldier) has a slightly slower rate of fire than its counterpart and has a slightly tweaked move set to compensate.

Getting kills with a class will earn you EXP towards it, and new levels then unlock new upgrades you can equip to further tweak a build for that character. One upgrade may decrease ability cooldown times when you land a critical kill, while another might expand the time a poison bomb stays active. All of them are useful in some way, but the limited number of upgrade points you have means you can only equip a handful of them at a time. Luckily, you can freely swap upgrades around when you’re not in combat, which encourages the player to keep experimenting until they find a proper playstyle.

Indeed, that’s a big part of the Plants vs. Zombies: Battle For Neighborville experience. Having twenty-four characters to play, plus all the possible combinations of upgrades for them, gives you a lot of angles to approach the gameplay of Plants vs. Zombies: Battle For Neighborville and that goes a long way towards giving it oodles of replayability. It takes hours to master the nuances of all the classes, and while there is certainly a much higher number of offensive-based classes, there’s enough variety between all the playstyles that you’re sure to find a few favourites. 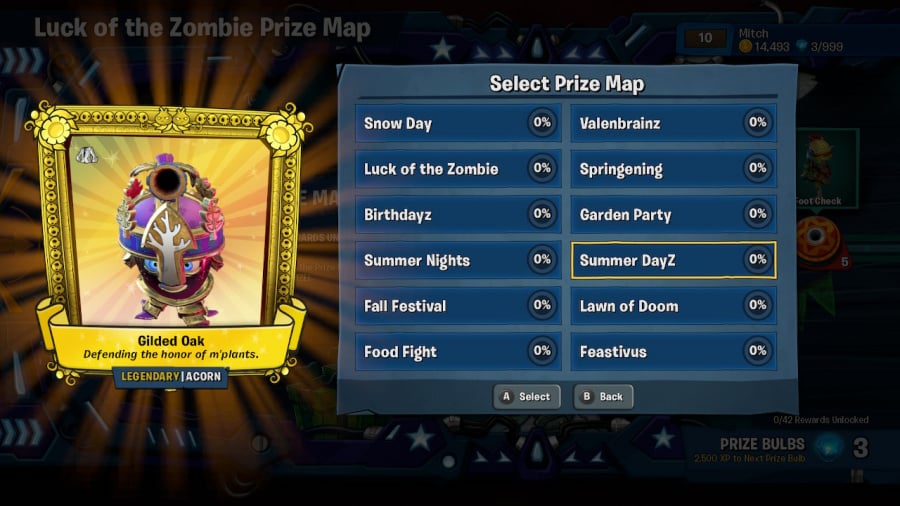 In the PvE mode, there are four main campaigns to work through, each taking around 5-8 hours to clear. You’re given the option to play for either the Plant or the Zombie teams, and each team has one exclusive map while one is shared between them. Whichever side you choose, you essentially play through a bite-sized open-world game wherein you run errands for various NPCs and complete some sidequests as you do so. Collectables and treasure chests are scattered liberally around each map, and you’re sure to come across plenty of enemy hordes as you rush to your next objective. There’s some variation in quest objectives, one may have you defending a point while another requires you to find three collectables by defeating enemies, though it doesn’t take too long for the quest design of this offline mode to start getting a little same-y. It doesn’t help that these campaigns are balanced around the main attack classes, so you’re fighting an uphill battle if you want to try running them with defence classes.

That said, there’s no shortage of incentives to keep you engaged if you can get past the repetition of mission objectives. Killing enemies and finishing quests nets you both coins for usage back in town and experience for furthering your character’s build. Additionally, each campaign has its own achievement system of ‘medals’ which encourage you to go for 100% completion, and the medals can then be used to get exclusive skins and other goodies. Considering that the original release not only had a battle pass system but also some rather hefty microtransaction usage, this adds up to a ton of extra stuff to unlock that’s now included in the game for the base price. Just in this single-player mode alone, then, you’re looking at probably around thirty or so hours if you want to try getting everything. 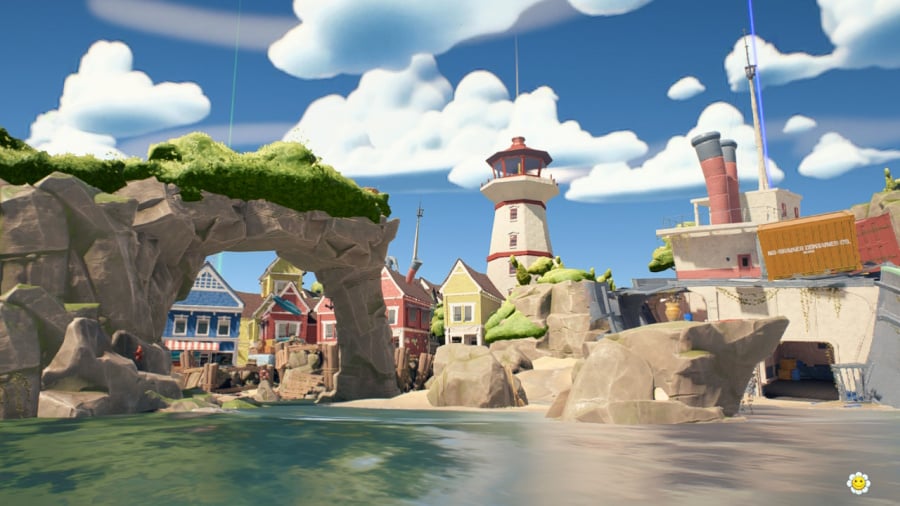 Then there’s the multiplayer to consider, which is arguably the main draw of the whole experience. There’s a nice array of modes on offer spanning the typical shooter game modes like team deathmatch or capture the flag, and while there isn’t much here that you won’t find in other modern shooters, it’s tough to be disappointed with the content on offer here. It’s a blast trying out and levelling up all the classes, and the mixture of game modes and maps ensures that it’ll be dozens of hours before things begin feeling too stale.

All of this is well and good, though the main drawback in our experience is that performance can be dicey whether you’re playing docked or handheld, no matter what mode you’re playing. The framerate never goes above 30 FPS, but when there’s any substantial action happening on screen, it usually seems to dip to sub-20 FPS levels. It’s not bad, but the framerate being all over the place does have an effect on gameplay and will more than likely contribute to a few missed shots. Gyro controls help to compensate for this somewhat, but there’s a lingering sense that Plants vs. Zombies: Battle For Neighborville could’ve used a little more optimization for the Switch’s humble hardware.

Plants vs. Zombies: Battle For Neighborville Complete Edition more than lives up to its name. A huge amount of content, lots of replayability, and an overall charming aesthetic make this an easy recommendation for anybody looking for a solid new shooter for their Switch. That said, just bear in mind that it often runs into performance issues and that the single-player offering can prove to be a little repetitive in the long run. If you can get past those issues, this release will surely prove to be worth both your time and money.