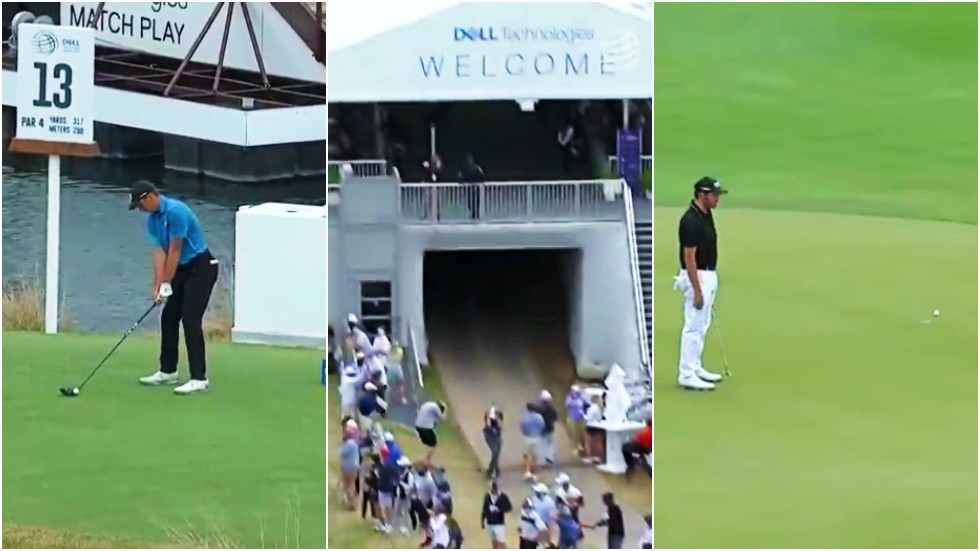 Anyone who has ever spent time on a golf course will know the feeling of seeing a drive swerve away from its intended direction – but golf star Jordan Spieth has proved that even the sport’s top pros aren’t immune to errant shots.

27-year-old Texan Spieth was in command in his opening match with Matt Fitzpatrick at the WGC-Dell Technologies Match Play, leading his opponent by three shots with six holes to play when he decided to go all out on the short par-4 13th hole.

The former world number one ranked – who, like noted golf hulk Bryson DeChambeau, has added some considerable muscle to his frame in attempt to bolster his tee shots – miscalculated sending his drive to the right towards the grandstand.

Spieth’s shot landed on a cart track before bouncing directly onto the 15th green – just as a confused Patrick Cantlay was putting for a birdie.

Incredibly, despite Spieth’s misplaced drive, he still salvaged the hole and soon rubber-stamped a 3&1 win against England’s Fitzpatrick.

When he was told the identity of the golfer whose drive ended up on the green he was putting from, an incredulous Cantlay said that he would have to take it up with Spieth later.

“Was it? I’ll give him crap about it,” quipped Cantlay.

“I think it landed on the cart path and then just shot over,” said Spieth of his unconventional approach on the 13th.

“To that back-left pin it’s a no-brainer: you hit driver up there and you have a 50 or 60-yard pitch right up the green, and that wedge shot is just so difficult to the back-left pin.

“When it hit the cart path it just makes it look crazier, but in reality you’re going to drop in the same place, no matter where you hit it. I don’t see that strategy changing for me. It was just kind of annoying to have to walk an extra 50 yards to get my ball.”

Reacting to the viral clip, golf babe Paige Spiranac called Spieth “all of us off the tee” – a sentiment that was shared by several other golf enthusiasts who could apparently relate to the feeling of seeing a drive arc away from its intended direction.

“One of us,” wrote one fan, while another said that they were “still impressed” by the shot despite it veering wildly off course.

“This is me, every shot,” another fan agreed.