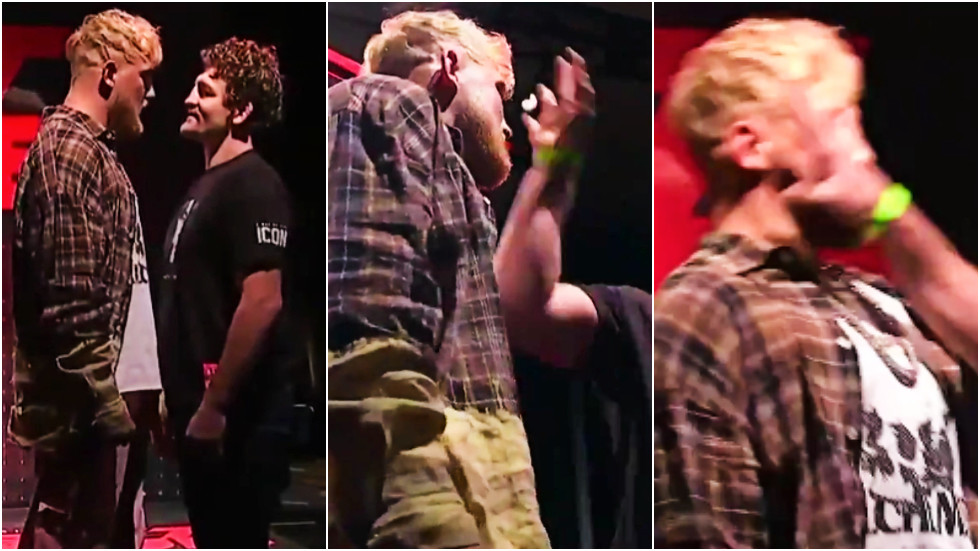 Ex-UFC star Ben Askren has won plaudits for his approach to foul-mouthed YouTuber Jake Paul after the pair tussled at a head-to-head for their boxing bout on Friday – with former champ Daniel Cormier offering enthusiastic backing.

Askren was involved in a physical confrontation with future opponent Paul, turning to put his hand across Paul’s face which caused his younger foe to push Askren from behind following their face-to-face showdown.

Leaving the stage after the pair enjoyed a brief staredown and mouthed at one another, the Bellator MMA and ONE legend clearly infuriated Paul.

The incident stopped there, but was preceded by a two-hour press conference where the combatants, who will fight in a boxing match on April 17, fired potshots at one another.

“If you and I ran into each other in a back alley in Las Vegas and I wanted to do a homicide…” Askren started at one point, before being interrupted.

“I would do a homicide on you if I wanted to,” warned Askren.

Back in the MMA community, Askren is earning plaudits for the way he is handling Paul.

Rather than trying to appeal to his young fanbase, Askren has adopted the role of an unimpressed yet restrained wise father, ready to dish out a hard lesson in humility.

Askren has been the perfect foil for Paul at this stage of Paul’s career. He’s not trying to out-cool him. More like son him. It works. pic.twitter.com/wfMYHj5U2B
— Ariel Helwani (@arielhelwani) March 27, 2021

“Askren has been the perfect foil for Paul at this stage of Paul’s career,” noted ESPN journalist Ariel Helwani. “He’s not trying to out-cool him. More like son him. It works.”

“Ben, I like the way you did him. Let’s go, Askren,” cheered on Helwani’s podcast partner and former-light heavyweight and heavyweight UFC champion Daniel Cormier.

“This is honestly great for Ben,” said one Twitter user in agreement. “He’s rehabilitating his image after [the] total humiliation that [Jorge] Masvidal dished out. The entire thing made Ben look like a clown – Paul is so unlikeable that it makes Ben look like a saint in comparison.”

“This is like a very poor man’s version of Conor McGregor,” wrote another. “Dude wants to be like him and just comes off fake and really douchey.”
Also on rt.com ‘It’s not looking good for him’: Mike Perry says ex-UFC star Askren will struggle against Jake Paul after training with YouTuber
Back at the press conference, further comments from Askren supported Helwani’s theory. “I’m going to take it seriously, but ‘the highest level of competition?’ Not even close,” he said.

“I’m going to have fun with this. That’s what I came for. Jake thinks he’s a high-level boxer, I think he’s fairly delusional. I guess we’ll find out,”

Askren shed light on his plans for the future following his vow to expose Paul.

“2021 seems like a tremendous year to beat up the whole Paul family,” he said, suggesting he could take on Floyd Mayweather’s eventual exhibition bout partner, Logan – once “Money” has done with him.
Also on rt.com YouTuber Jake Paul eager to prove he’s ‘real deal’ ahead of Askren fight as he links up with ring legend Holyfield (VIDEO)