When you first see Renzo Racers’ main menu, it’s clear that it makes no bones about the fact it’s taking on Mario Kart. The game’s logo is a shameless imitation of Mario Kart 8’s, right down to the light blue ‘RR’ design that looks suspiciously like the 8.

The problem is, by the time you’ve reached this menu screen, the game has already shown it isn’t up to scratch, because chances are you’ve already sat through its awful intro sequence, which has so many bizarre camera cuts, awkward animations and worryingly low-res kart textures it feels like an HD remaster of an N64-era game.

Get into the game itself and it’s your typical sub-par karting effort. On paper it seems okay – there are 20 tracks to choose from, divided into five cups, and there are also options to choose a single track to play or take part in a split-screen two-player game if you hate someone enough to put them through it. There are also eight characters to choose from – with another eight unlockable through gameplay – so in theory, there’s a decent amount to do. In practice, though, none of this really matters when you head to the track and realise something’s gone horribly wrong. 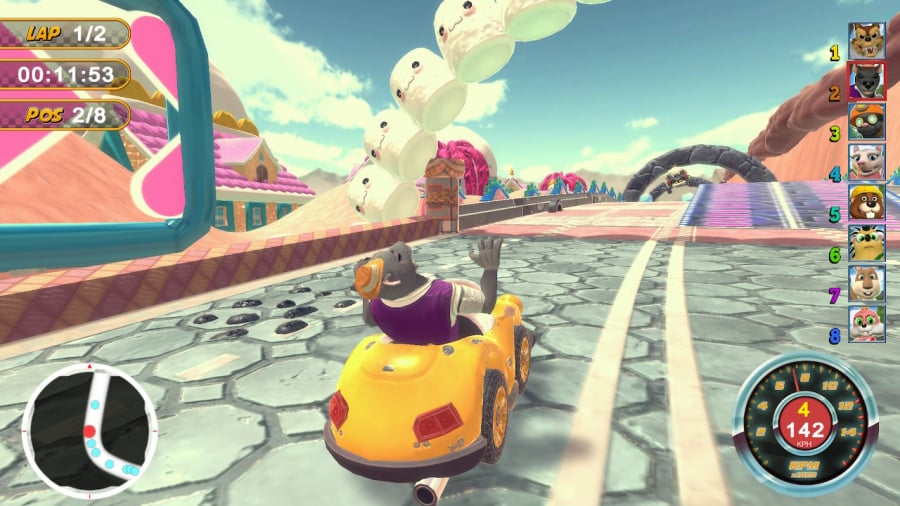 For starters, your kart takes an eternity to pick up speed, to the extent that you start to think your character might have a better chance if they climbed out and jogged around the track instead. Once you eventually reach your top speed it turns out the handling is even worse; it drastically affects the quality of the game, because nearly every bend you approach is a potential race-ending situation.

You see, your car doesn’t have a turning circle, it has more of a turning oval. When you first begin a turn the kart doesn’t really turn that much, leading you to think it might not actually manage to get you around the corner. Then, all of a sudden, the opposite extreme kicks in and your kart turns sharply, meaning you’re likely to hit the inside of the bend unless you brake. Which, of course, then means slowly accelerating back to full speed again.

Whereas this would simply be an inconvenience in most racing games (albeit a large one), here it’s potentially fatal because for some reason the walls in Renzo Racer have an uncanny knack for flipping your kart onto its side at the slightest contact. The fact the Y button is assigned solely to respawning your car and placing it back in the middle of the track speaks volumes here. 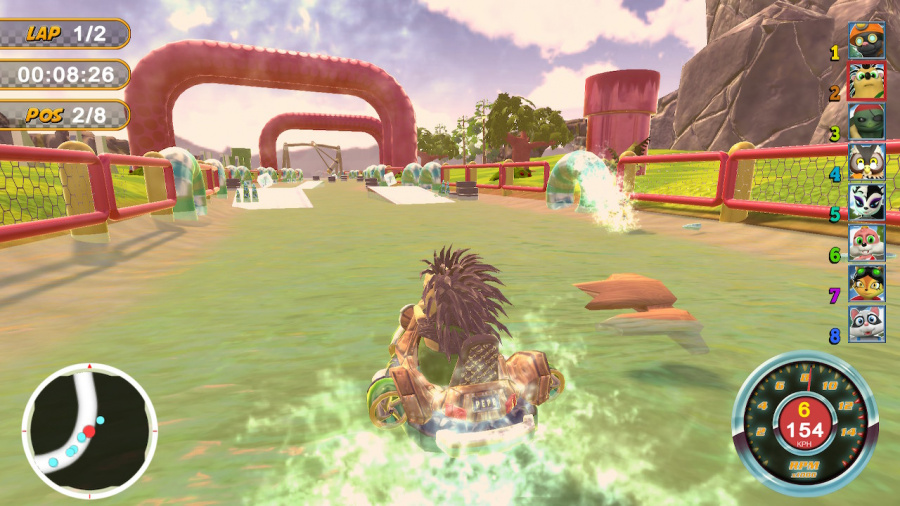 This is a game that knows it’s broken and thinks that by giving you an easy-to-reach “unbreak yourself” button it’s solved the problem, when the better solution would have been to not be rubbish in the first place. It’s like a hairdresser who knows they’re terrible, so instead of practising and improving their skills, they just decide to give away free hats with every haircut.

On top of all this, the character designs are just… creepy. They’re all based on various animals, but the results are mixed, to say the least. Pepe Porcupine looks like he hasn’t slept in three weeks, Lenny Lizard just has two terrifying black balls for eyes, and Bayla Bunny and Bayou Beaver have an unnerving Five Nights at Freddy’s look to them.

Unfortunately, the most unnerving of the bunch by far is the hero character himself, Renzo Raccoon. His lifeless stare now has us turning our Switch towards the wall at night in case he crawls out of it like someone out of a Japanese horror movie and tears our lungs out while we sleep. Which isn’t really the sort of vibe you want from the main character in a karting game.

Renzo Racer could have been worth a look if its handling had been greatly improved, it’s collision system wasn’t a mess and its characters didn’t have you terrified for your life. If those three simple things had been fixed we’d be recommending you fork out the $ 20 it asks of you. Instead, we recommend you put that money towards fitting a nice strong lock on your bedroom door in case Renzo ever finds out where you live.