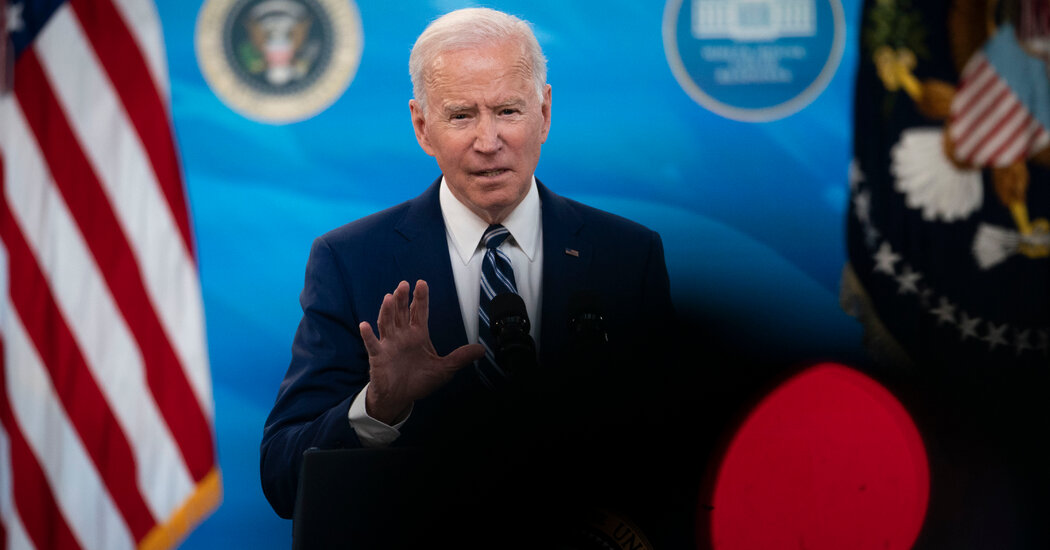 WASHINGTON — President Biden, facing a rise in coronavirus cases around the country, called on Monday for governors and mayors to reinstate mask mandates as the director of the Centers for Disease Control and Prevention warned of “impending doom” from a potential fourth surge of the pandemic.

The president’s comments came only hours after the C.D.C. director, Dr. Rochelle Walensky, appeared to fight back tears as she pleaded with Americans to “hold on a little while longer” and continue following public health advice, like wearing masks and social distancing, to curb the virus’ spread.

The back-to-back appeals reflected a growing sense of urgency among top White House officials and government scientists that the chance to conquer the pandemic, now in its second year, may slip through its grasp. Coronavirus infections and hospitalizations are on the upswing, including a troubling rise in the Northeast, even as the pace of vaccinations is accelerating.

“Please, this is not politics — reinstate the mandate,” Mr. Biden said, adding, “The failure to take this virus seriously is precisely what got us into this mess in the first place.”

According to a New York Times database[1], the seven-day average of new virus cases as of Sunday was about 63,000, a level comparable with late October’s average. That was up from 54,000 a day two weeks earlier, an increase of more than 16 percent. Similar upticks in Europe have led to major surges in the spread of Covid-19, Dr. Walensky said.

Public health experts say that the nation is in a race between the vaccination campaign and new, worrisome coronavirus variants. Although more than one in three American adults have received at least one shot and nearly one-fifth are fully vaccinated, the nation is a long way away from reaching so-called herd immunity — the tipping point that comes when spread of a virus begins to slow because so many people, estimated at 70 to 90 percent of the population, are immune to it.

But states are rapidly expanding access to more plentiful quantities of the vaccine. On Monday, at least six — Texas, Kansas, Louisiana, North Dakota, Ohio and Oklahoma — made all adults eligible for vaccination. New York said that all adults would be eligible starting April 6[2].

Mr. Biden said on Monday that the administration was taking steps to expand vaccine eligibility and access, including opening a dozen new mass vaccination centers. He directed his coronavirus response team to ensure that 90 percent of Americans would be no farther than five miles from a vaccination site by April 19.

The president said doses were plentiful enough now that nine of 10 adults in the nation — or more — would be eligible for a shot by that date. Previously, he had called on states to broaden eligibility to all adults by May 1. He revised that promise because states, buoyed by projected increases in shipments, are opening their vaccination programs more rapidly than expected, a White House official said.

But it was Dr. Walensky’s raw display of emotion that seemed to capture the angst of the moment. Barely three months into her new job, the former Harvard Medical School professor and infectious disease specialist acknowledged she was departing from her prepared script during the White House’s regular coronavirus briefing for reporters.

She described “a feeling of nausea” she experienced last year when, caring for patients at Massachusetts General Hospital, she saw the corpses of Covid-19 victims piled up, overflowing from the morgue. She recalled how she stood — “gowned, gloved, masked, shielded” — as the last one in a patient’s room before they died alone, without family.

“I am asking you to just hold on a little longer, to get vaccinated when you can, so that all of those people that we all love will still be here when this pandemic ends,” Dr. Walensky said. The nation has “so much reason for hope,” she added.

In nine states over the past two weeks, virus cases have risen more than 40 percent, The Times database shows. Michigan[3] led the way with a 133 percent increase, and the Northeast has also seen a marked rise in virus cases. Connecticut[4] reported a 62 percent jump over the past two weeks, and New York[5] and Pennsylvania[6] both reported increases of more than 40 percent.

Michigan[7]’s increase has not been traced to any one event, but epidemiologists have[8] noted that cases started to rise after the state eased restrictions for indoor dining on Feb. 1 and lifted other restrictions in January. Other hot spots included North Dakota[9], where cases rose by nearly 60 percent, and Minnesota[10], where cases have risen 47 percent. Of those states, North Dakota is the only one currently without a mask mandate.

The wave of new cases does come at the same time as some promising news: A C.D.C. report released Monday confirmed the findings of last year’s clinical trials[11] that vaccines developed by Moderna and Pfizer were highly effective against Covid-19. The report[12] documented that the vaccines work to prevent both symptomatic and asymptomatic infections “in real-world conditions.”

Researchers followed nearly 4,000 health care employees and essential workers beginning in December. They found 161 infections among the unvaccinated workers, but only three among those who received two doses of vaccine. The study suggested even a single dose was 80 percent effective against infection two weeks after it was administered. Studies are continuing to determine whether vaccinated people can still transmit the virus to others, although many scientists consider that unlikely.

The pace of vaccination continues to pick up. The seven-day average of vaccines administered hit 2.76 million on Monday[13], an increase over the pace the previous week, according to data reported by the C.D.C. On Sunday alone, nearly 3.3. million people were inoculated, said Andy Slavitt, a senior White House pandemic adviser.

Broader eligibility pools should bolster that further, with more than three dozen states now allowing all adults to sign up for shots by mid-April.

Minnesota will open up to all adults on Tuesday, and Connecticut on Thursday. Florida has lowered the age of eligibility to 40, and Indiana has lowered it to 30.

At the same time, Covid surges in some states have health officials increasingly on edge. Similar escalations several weeks ago in Germany, France and Italy have now turned into major outbreaks, Dr. Walensky said.

“We know that travel is up, and I just worry that we will see the surges that we saw over the summer and over the winter again,” she said.

As his presidency enters its third month, Mr. Biden is still fighting some battles started by his predecessor, who turned the act of mask wearing into a political statement. As soon as he took office, Mr. Biden used his executive authority to impose mask requirements where he could — on federal property. And he urged all Americans to “mask up” for 100 days.

But some governors, particularly in more conservative states, ignored him. When the governors of Mississippi and Texas announced this month that they would lift their mask mandates, Mr. Biden denounced the plans[14] as a “big mistake” that reflected “Neanderthal thinking.”

“There is something particularly difficult about this moment,” said Dr. Joshua M. Sharfstein, a former top Food and Drug Administration official who now teaches at the Johns Hopkins Bloomberg School of Public Health. With more and more Americans vaccinated and the potential to bring the pandemic to an end in sight, he said that “it feels like every case is unnecessary.”

Dr. Walensky, who has issued several warnings in recent weeks about the need to keep up mask wearing and social distancing, said she planned to talk to governors on Tuesday about the risks of prematurely lifting restrictions.

“I know you all so badly want to be done,” she said. “We are just almost there, but not quite yet.”