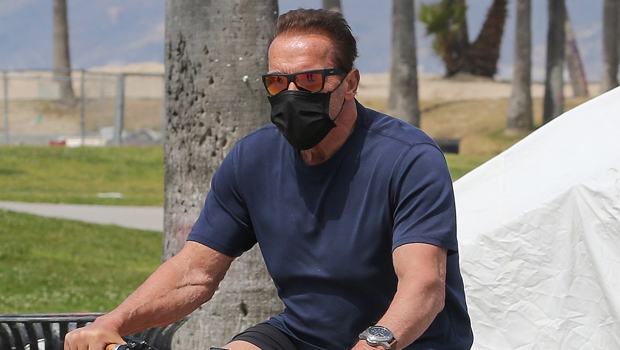 Former bodybuilder Arnold Schwarzenegger is looking just as buff as ever! The 73-year-old has been keeping fit, and was recently spotted on a solo bike ride.

Arnold Schwarzenegger[1] is staying in shape! The 73-year-old former Governor Of California showed off his very muscular arms while out for a bike ride by himself in Los Angeles’ Venice Beach on April 1. He wore a fitted, dark blue tee with black shorts and matching black sneakers. He also accessorized with orange-tinted shades, a silver watch and a black protective face mask. Although it’s been decades since Arnold was in his bodybuilding prime, the father-of-five is truly looking as toned as ever.

His mini-me son Joseph Baena[2] has been taking after his dad in the fitness world, and the 23-year-old has even been spotted joining his father for bike rides[3] around Venice Beach. Joseph took to Instagram on January 15 to post a series of pics, including a photo which showed the father-son duo posing in front of a mural. It featured Arnold doing one of his famous bodybuilding poses[4], while the real-life Mr. Universe watched on. Joseph, who looks like the spitting image of his father[5], crossed his arms in the background, while rocking a black tee, grey shorts and dark sunglasses. Like father, like son!

Most recently, the Pepperdine University grad[6] proved he can pose like a pro, in a new Instagram snap. He wore very short-shorts in the March 5 pic, allowing his bulging thigh muscles show. He has all of the competition poses[7] down pat, and even showed off the most famous one, with featured him with his arms curled upwards in the front double bicep pose. The movement, which is one of the mandatory poses in men’s bodybuilding competitions, allowed Joseph to flex his biceps as well as his incredibly ripped lats, and fans couldn’t believe how much he looked like his old man.

Of course, Arnold has been using his platform for good. Back in January, he lambasted former President Donald Trump[8] in a powerful PSA, in which he compared the siege on Capitol Hill[9] to the rise of Nazi Germany. He took to Twitter on January 10, releasing an eight-minute-long video in which he declared Trump the “worst president ever”.[10] “Wednesday was the Day of Broken Glass right here in the United States. But the mob did not just shatter the windows of the Capitol. They shattered the ideas we took for granted … [and] trampled the very principles on which our country was founded.”