Sandie Shaw now: The barefoot British Eurovision champion who was...

Sandie Shaw performs on Eurovision in 1967

Not only was Sandie Shaw the first-ever British winner of the Eurovision Song Contest, when Puppet On A String topped the UK charts it made her the first British female singer ever to have three number one records. She was only 20 at the time and, shockingly, her manager was already regarding her as a pop has-been ready for a TV light entertainment makeover. The 1960s were a brutal time for teenage female singers. Two years later, Lulu would follow her down the Eurovision path at exactly the same age. No wonder they both have very mixed feelings about the Contest. When she was 17, Sandra Ann Goodrich came second in a talent contest at the Ilford Palais in Essex and the prize was to appear at a London charity contest. Singer Adam Faith, already a huge star, was there and recommended her to his manager Eve Taylor, who repackaged her as Sandie Shaw and got her a record deal.

Her second single, a cover of (There’s) Always Something There to Remind Me, was a number one smash, followed by number three hit Girl Don’t Come and another number one, Long Live Love, in June 1965.

She also released music across Europe, singing in French, Italian, German and Spanish, which would come in handy a few years later.

Sandie was still only 18, but her gamine looks, trademark fringe, barefoot bohemia (actually the result of ‘inherited misshapen feet) and natural style made her an instant “It girl” and fashion icon. 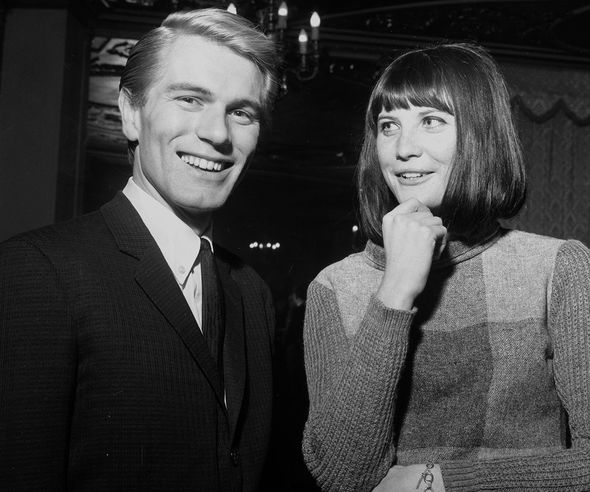 She was part of the trendsetting in-crowd in London and was horrified when Taylor brought up the subject of Eurovision.

Even in the 1960’s, Eurovision was regarded with wariness by serious musicians and Sandie had ambitions to write and produce, and to develop a more progressive sound.

However, her personal life had suddenly plunged her into notoriety and she was coerced into taking part.

In 1966, the teenager was named in the divorce proceedings of ­television executive Douglas Murdoch and his model wife Veronica Sands.

Murdoch produced the music show Ready Steady Go! on which Sandie regularly appeared and his wife said in court that she had found the teenage star at their flat on numerous occasions, once wearing only a nightgown. Sandie Shaw in 1967, the year of Eurovision (Image: GETTY)

This was potentially career-ending for a pop princess at that time and she lost high-profile advertising endorsements like Lux soap.

Taylor worked with the BBC, who were not keen at first, to repackage Sandie as a wholesome light entertainment star and she became the face of Eurovision 1967.

Sandie sang five songs on the Rolf Harris TV show and the British public voted on their favourite. Despite Sandie personally thinking it was ridiculous, Puppet On A String won by a landslide and she was packed off to compete in Vienna.

On the night, there was even a mishap with her microphone at the start of the song but the Essex lass explained why she refused to let anything, from technical problems to her own feelings about the song, stand in her way.

If you watch the video, you will see that the microphone is not switched on when she starts singing.

Sandie later said: “I was so focused on delivering the best performance for the UK that I would have carried on even if the stage collapsed! I was also very relaxed with the European audience as I had already worked there for many years and I felt everyone’s support and friendship.”

The UK entry obliterated the competition, pulling in 47 votes to the second-place French and Irish on 20 votes.

Sandie returned a national hero, married fashion designer Jeff Banks in March 1968 (they had a daughter, Gracie in 1971) and launched her own fashion label. Sandie Shaw at the Chelsea Flower Show in 2014 (Image: GETTY )

In the early 1970s, Sandie’s music career as a pop princess dried up and her record contract expired in 1972. She blamed Puppet On A String: “It ruined me creatively for a while. It took away any means of me striking out and doing anything I thought worth doing.”

She planned to concentrate on her family but unfortunately, money problems followed in her marriage: “I didn’t want to work. I didn’t want to leave my baby. But to be honest, I had to work because my husband lost all our money.”

Sandie appeared on TV entertainment shows, and tried her hand at stage acting with roles as Ophelia in Hamlet and the lead in St Joan.

Her marriage ended in 1978 and, broke, she temporarily took a job as a waitress. In 1982, Sandie married Nick Pyke, one of the co-founders of Virgin Records. As well as two children, the marriage resulted in a creative period when she worked with major stars like Chrissie Hynde and The Smiths. Her version of their song Hand In Glove returned her to the charts in April 1984.

Since then, she has recorded albums and film soundtrack thems sporadically, at her own choosing, released her autobiography The World at My Feet in 1991, and qualified as a psychotherapist in 1994.

IN 1995 she married her third husband, psychologist Tony Bedford and they set up the Arts Clinic to counsel musicians and performers. Sandie enjoyed yet another renaissance in 2010 when she sang on the soundtrack to the film Made In Dagenham and went on tour with Jools Holland in 2011.

In 2017 she was awarded an MBE for services to music. And those famous feet?

Back in 2007, Sandie revealed that while she would never have plastic surgery, she had had corrective surgery on her feet: “I have always wanted beautiful feet. My husband says that, when I was being created, the design team did a great job until they got down to my ankles.