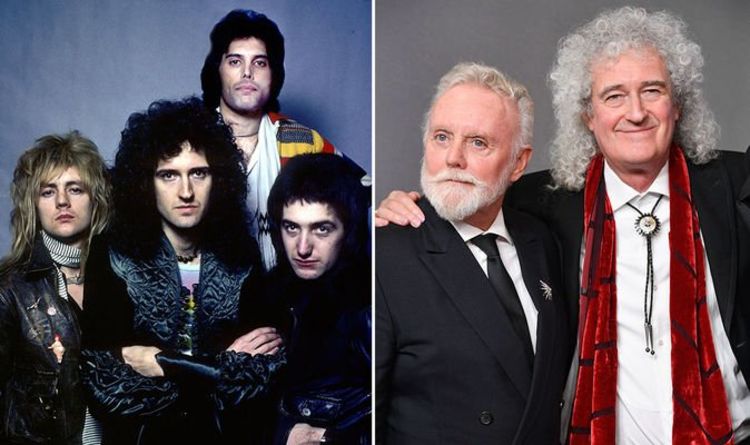 It was half a century ago this year that John Deacon joined Freddie Mercury, Brian May and Roger Taylor as Queen’s bassist, completing the iconic band’s final line-up. Like many classic rock groups from that era, it’s now their turn to celebrate a 50th anniversary aka Queen’s Golden Jubilee. In an exclusive interview with Express.co.uk, Brian admits that while he’s pleased with the band’s achievements, it’s somewhat bittersweet without Freddie Mercury.
Brian said: “Well I’m proud. Of course, we’re proud of what we’ve done and we’re still around.

“We just kind of didn’t want to harp on it. We just thought, ‘Let’s just celebrate the fact that we’re still creative.’

“I think it also…because Freddie’s not here it changes our feelings a little bit. There’s always going to be that little bit of…reticence in a sense.

Just a few years later John retired from music entirely, but Brian and Roger have kept Queen’s show on the road with great gusto – alongside their collaborative singer Adam Lambert.

Brian continued: “I’m very proud of what we do now with Adam.

“It’s been incredible, the sort of…the re-birth and response we’ve had around the world.

“And it’s great that we can own our own legacy, own our own material and keep it alive rather than it being a museum piece or fossil.”

But afterwards, the Queen guitarist and drummer decided: “Actually I don’t think we want to do that, we just want to get out and play.”

May said: “We want to celebrate being alive and being live.That would be the greatest thing to celebrate.

“I don’t really care how long it’s been to be honest. I’m just grateful that we’re here.”

Queen and Adam Lambert are set to resume touring in summer 2022, as the pandemic has seen the band forced to postpone their UK and European shows twice.

May told us last month: “It’s galling because all those dates are held, all those tickets are sold.

“People are sitting there with their tickets gallantly holding on to them, which is a great compliment to us that people don’t want to trade their tickets back.”

The Queen legend was referring to his new single with Kerry Ellis that he was promoting called Panic Attack 2021 (It’s Gonna Be All Right), which is out now.