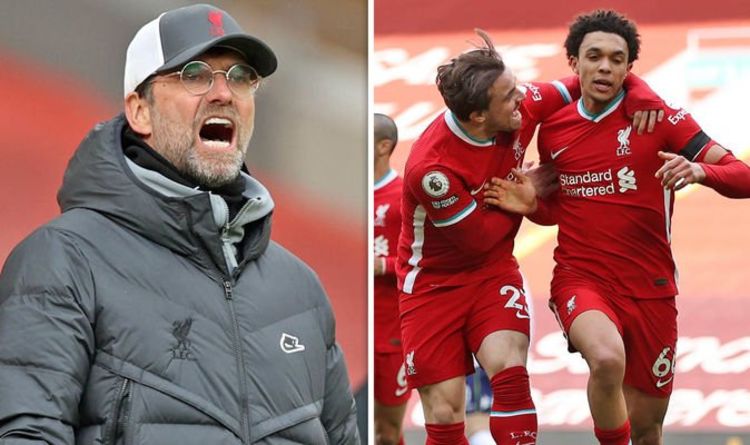 Liverpool manager Jurgen Klopp has opened up after his side’s 2-1 victory over Aston Villa on Saturday. The Reds went into the game looking to boost their chances of securing Champions League football for next season. And they did just that, scoring in the closing stages to take all three points.
Liverpool fell behind against Aston Villa, with Ollie Watkins opening the scoring in the 43rd minute.

The England international, who recently scored on his Three Lions debut against San Marino, struck a low effort that snuck under the body of Alisson Becker.

Liverpool had a goal from Roberto Firmino chalked off for offside as they hunted a crucial equaliser.

But they levelled through Mohamed Salah, with the Egypt international then sparking a terrific turnaround.

And, in the closing stages of the game, they took all three points through Trent Alexander-Arnold to spark jubilant celebrations on the touchline.

It was a massive result for Liverpool, who are set to relinquish their Premier League title to Manchester City.

And, speaking after the game, Klopp admitted his players were far from happy in the dressing room at half time – while also hailing Alexander-Arnold for his winner.

“We dominated the game but we made one mistake and concede a goal,” he said.

“Then we score the equaliser but it’s ruled out for offside. At half-time it wasn’t the best mood, you can imagine but the words were OK.

“I didn’t have to lift them too much, they knew if we continue to play like we did we would create chances again. We dealt with their game really good. It was massive, it felt massive to win. A real relief.

“We were there, we defended well, we were constantly in the creating mood without having 20 clear-cut chances. We needed that win today, these three points feel big.

“We can stop that chat about Trent, everyone agrees that he is an outstanding player. It’s Gareth Southgate’s decision what he does for the squad but we don’t have to talk about it every week. We don’t have to justify the players’ status every week.

“We have to put the other teams under pressure. Everyone knows that when we get on a run we are dangerous.”

Contrastingly, Villa boss Dean Smith was disappointed – saying his side deserves at least a point.

“We had a lapse in concentration, we had some good opportunities and didn’t have that final pass in the final third.

“We’ve come to Liverpool, knew how they would play and how determined they were to put things right at Anfield but it’s disapopinting to concede so late.

“Ollie Watkins played well again, he’s got four goals against the champions but we leave with nothing.

“Douglas Luiz’s English isn’t the best. The doctor thought he said he had double vision but when he came off the translator came down and cleared it up and he was ok to carry on.”

Liverpool goalscorer Salah was relieved at the final whistle, saying: “Finally! It was a great game, tough game but we won the game and that was the most important thing.

“We have lost a couple of games here and mentally it was like ‘oh no, not again’ but we did a good job second-half.

“It’s hard not to win at Anfield for a couple of games, we also missed a couple of chances in the first half and we were thinking ‘not again’ but the second half we managed to play good.

“It’s really important to win. I think there are only seven games left? So it’s really important. We want to play Champions League next year but we just need to focus on each game and try and win them all and hopefully, we can be in that fourth place.”

James Milner added: “I think many things but it was important to win, it was an important performance- it wasn’t our best by any means. Decision seemed to go against us but that’s the way it is. We have to stick it out and find a way.

“Aston Villa are a good team, we know that from the first game. They have got good players, they are well organised and they are tough to beat – so it’s important that we got that win.

“It’s nice to be in and around the Champions League spots but the most important thing is we concentrate on ourselves and try and get back to that consistent level. We need to take it in and keep improving and keep moving forward as a team.”

Sitting in the Sky Sports studio, Graeme Souness praised Liverpool – though insisting they ‘huffed and puffed’ their way to victory.

“They did huff and puff at times,” he said.

“It was an effort for them. It wasn’t the silky free-flowing stuff we’re used to seeing from them. A staggering fact that Liverpool hadn’t won in Anfield in 2021.

“They’ve got away with it today, a great strike from Trent Alexander-Arnold – who didn’t have the best of games – great finish.

“Wicked right foot. What he’s doing in that position you’ll have to ask him.”

On the winning goal from Alexander-Arnold, he added: “He gets himself in midfield, here. He thinks ‘wait a minute, I’m out of position’. He has to look back, ‘should I go back? No I’m on here’.

“You think the chance is gone, this is why he ends up at left-back. Ends up with Trent here, ball out of his feet and that is a great strike.

“He’s got a ridiculously good right foot. Whips it with pace, around players and the goalkeeper can’t see much of the ball.”