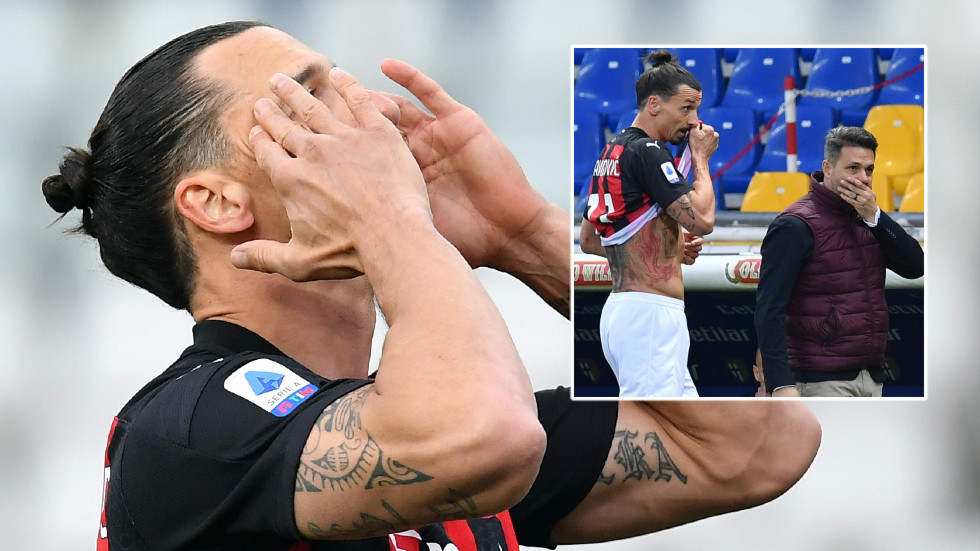 Two days after receiving his first red card in the Italian Serie A for more than nine years, Zlatan Ibrahimovic has endured more controversy via accusations that he breached Covid ruled when he was pictured visiting a restaurant.

Despite earning a 3-1 away win that kept them four points clear of Cristiano Ronaldo’s Juventus in second place, AC Milan had a flashpoint to forget on the hour mark against Genoa, as their 39-year-old top scorer received a straight red card for the dissent.

Ibrahimovic’s week has worsened after allegations in the Italian press that the fiery striker could have violated Covid rules in Milan by having his friend open a restaurant exclusively for him.

“First Ronaldo, now this,” remarked one journalist, in a nod to Ibrahimovic’s old rival being accused of a similar indiscretion when he embarked on a skiing trip with partner Georgina Rodriguez earlier this year.

Spoke to 2 sources. Zlatan Ibrahimovic DID NOT break COVID rules. It was a private business meeting. He did not eat anything & was there simply for businessFirst Ronaldo, now this. Italian media (not F.I) pumping out the fake news the last few days https://t.co/WraaTYMkkY
— Carlo Garganese (@carlogarganese) April 12, 2021

“Spoke to two sources. Zlatan Ibrahimovic did not break Covid rules. [The] Italian media [are] pumping out the fake news, the last few days.

“It was a private business meeting. He did not eat anything and was there simply for business.”

Ripping the cocky way the veteran talks about himself in the third person, a reader joked: “Zlatan does not break COVID rules – the COVID rules break for Zlatan?”

Sent off on Saturday, #Zlatan then decided to break Italian protocol by going out for a bite to eat with a few mates yesterday, at a 300.00 per-head restaurant.

AC Milan are “confident” that an agreement will be reached soon with Zlatan Ibrahimovic for the extension of his contract.The current one expires in two months, but AC Milan and Zlatan want to move forward together until June 2022. Ibra will be 40 y.o. in October. 🇸🇪 #ACMilan

Speculation aside, it has been reported elsewhere that Ibrahimovic is close to putting pen to paper on a contract extension with the Rossoneri.

Technical director Paolo Maldini told Sky Sports: “There are only small details missing and, therefore, we are very close to the renewal.”

Netting 15 goals in 17 league appearances for the fallen European giants this season, Ibrahimovic had fired Milan to the top of Serie A until a poor run of results saw them overtaken by cross-city rivals Inter, who are now eight points clear at the top of the table.

That is one of the reasons why, despite the Sweden legend turning 40 in October, the San Siro side are keen to tie him down to what would be his fifth campaign in their iconic red and white jersey, with an official announcement expected in a matter of days.
Also on rt.com Zlatan slammed for posting about ‘protecting nature’ after explosive claims he shot lion on trip to South Africa