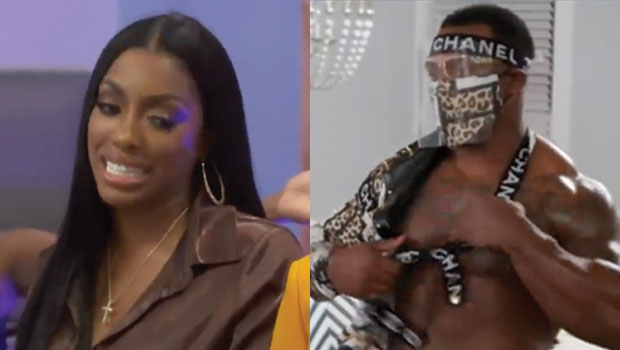 Kandi Burruss finally broke her silence on who allegedly had sex with Bolo the stripper, during the April 10 episode of ‘RHOA’.

The April 11 episode of The Real Housewives of Atlanta[1] picked up where last’s weeks left off — at Kandi Burruss[2]‘ new restaurant tasting event. Marlo Hampton had also just arrived, so things got pretty dramatic very quickly.

It all started when Marlo tried to apologize for going off on Porsha Williams[3] at the event with Big Freedia, but Porsha wasn’t interested in forgiving her on-again/off-again friend. Instead, she and BFF Shamea Morton accused Marlo of lying about getting liposuction. They claimed she secretly had the procedure just before the most recent cast trip to New Orleans, but she said otherwise.

It was actually a silly argument and one that only started because Porsha and Shamea were tired of Marlo acting messy, but Marlo told Kandi that Porsha needs to be more careful because if she keeps coming for her, she’s going to spill some major tea.

“You know how right now I could go below the belt and tell her don’t play it off. I know [you] heard [her having sex],” Marlo told Kandi, referring to the fact that Porsha keeps denying she had sex with Bolo the stripper at Cynthia Bailey‘s bachelorette party. Then, a bit of unaired footage showed Marlo talking to Kandi in South Carolina, six weeks prior, and asking her who she thought had sex with the stripper. Kandi could then be heard saying, “Oh, I know who it was.”

Kandi didn’t name anyone on camera or on her microphone, but the way Marlo was speaking this way made it seem as though Kandi named Porsha. Kandi asked Marlo not to put her “in the middle” of their drama, but Marlo said, “I will [if I have to], so she better stop.”

Then, in a private confessional, Marlo admitted, “Kandi told me about the bitch over there f***ing Bolo all night, but I’m going to keep it sealed.”

As many fans know, Kenya Moore[4] has been on a season-long crusade to prove that Porsha had sex with the stripper — something she claims to have heard with her own ears. But Porsha has denied, over and over again, that she sex with anyone that night… despite what anyone may have heard.

Meanwhile, Drew Sidora confronted LaToya Ali after their personal lives collided. Drew heard that LaToya was hooking up with her prophet — the same man who was supposed to bless her daughter at the kids’ forthcoming christening. However, once Drew heard that LaToya was having relations with the prophet, and the prophet allegedly cheated on his fiancee, she refused to let him baptize her daughter. Apparently, she felt like it would have been bad juju.

Drew eventually confronted LaToya, but everyone thought it was an odd things to fight about — especially since the prophet’s personal life had nothing to do with whether or not it’d be kosher for him to baptize a child. Anyway, later, when LaToya was alone with the ladies (sans Drew), she called the prophet and the prophet told everyone that he did not have any sort of relationship with LaToya, nor was he engaged to anyone in the last couple of years. He basically called Drew a liar.

Finally, Kenya shared new hope for her marriage with Marc Daly, after she revealed that Marc had decided to spend more time in Atlanta and go to couples’ therapy with her. Will it last? Only time will tell.