Most powerful passports in the world mapped – how strong... 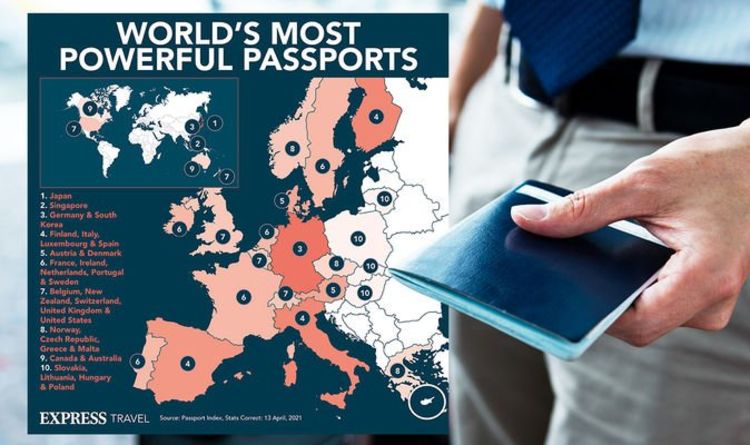 The Henley Passport Index found Japan’s passport offers its citizens the most freedom around the world. The number one spot has been held onto by the Asian country since 2018, using exclusive data from the International Air Transport Association (IATA). Japanese passport holders are theoretically able to access a record 193 destinations around the world visa-free.
These results contrast greatly to Afghanistan which came right at the bottom of the list.

These results indicate that the gap in travel freedom is now at its largest since the index began in 2006.

Other countries of note in the index were China and the United Arab Emirates (UAE).

However today, thanks to the Emirates’ ongoing efforts to strengthen diplomatic ties with countries across the globe, it is ranked 15th with a score of 174.

The Index is the original ranking of all the world’s passports according to the number of destinations their holders can access without a prior visa.

The latest findings provide exclusive insight into what post-pandemic travel freedom might look like as countries around the world selectively begin to open their borders to international visitors.

Commenting on the latest ranking, Dr Christian H. Kaelin, Chairman of Henley & Partners and the inventor of the passport index concept, says the past year has demonstrated that no government is infallible – even the world’s superpowers and wealthiest nations floundered – and many failed their citizens.

“While nobody expects a return to pre-pandemic mobility levels anytime soon, the outlook now is certainly more hopeful than it was even a few months ago,” Kaelin said.

“The latest Henley Passport Index ranking is a reminder that economic recovery and development are dependent on global mobility, including personal travel freedom, and that passport power should never be taken for granted.”