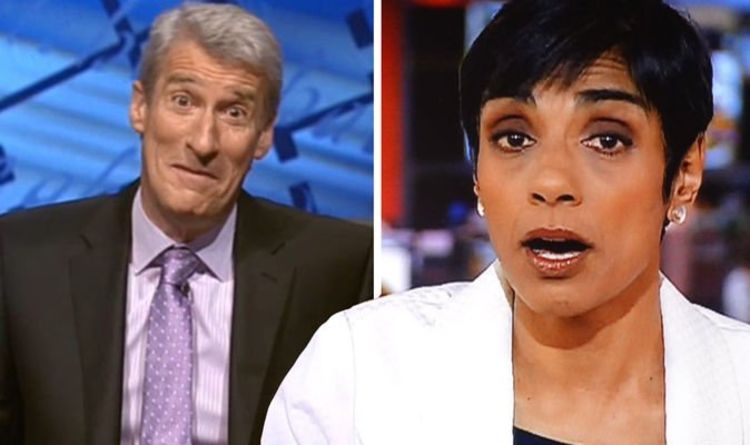 Reeta Chakrabarti, 56, wasn’t impressed with her BBC colleague Jeremy Paxman’s comments on news readers, after he stated “any fool” can do it. But Reeta believes it’s an art, and having worked as a main presenter on BBC news since 2014, she has it mastered.
But in a recent interview, she wanted to address the University Challenge host’s remark, disagreeing whole-heartedly.

“It’s his opinion, but I wonder why he says it when he spent quite a few years himself reading an autocue,” she wondered, referring to Jeremy’s former role presenting Newsnight.

“And if I’m presenting the one o’clock news, I’ve written a lot of what I’m reading out. Those aren’t someone else’s words.”

She added: “I’m a journalist, I know what the stories are, I discuss them with the editor and the correspondent, and I pride myself on being able to write with simplicity and clarity.

One of Reeta’s most memorable moments as anchor was during the height of the pandemic last October, when she had to pad out the show for a whopping three hours after a Downing Street press conference was delayed.

Laughing, she admitted: “It was a good job I didn’t know the delay was going to happen when I walked through the newsroom doors on that particular day, as I’d have been more jittery!

“With live news, you just have to cope and manage.”

“I could have done with a stiff gin, but I still had the ten o’clock news to present, so I had to wind down with a Diet Coke.”

The presenter has worked throughout the entirety of the pandemic and revealed she wasn’t all that “nervous” about doing so even when things were uncertain.

“I’m careful, I follow all the rules, but I’m not a nervous person,” she told Radio Times.

“Actually, I’ve felt grateful because those of us who’ve continued to go in have changed in our attitudes.”

She went on to explain that at the beginning she and her co-stars used to “do our work and dash off”, but as lockdown is easing and people are becoming more adaptable to this new way of life, things are starting to change.

“Now, we talk to each other more and, occasionally, you’ll find that a colleague is having a hard time or knows someone who’s passed away,” she said.

“We’ve become more caring, and that can only be a good thing.”