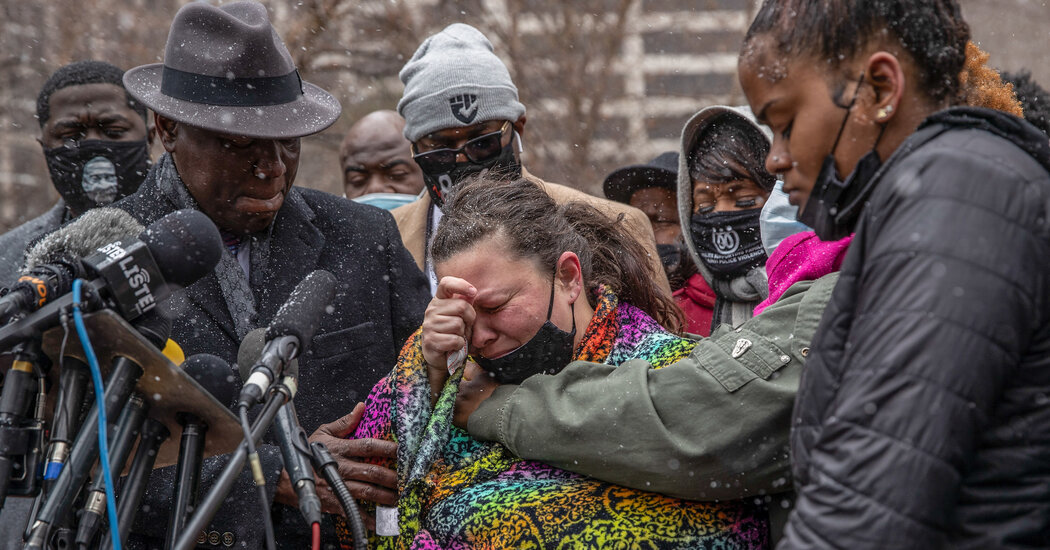 MINNEAPOLIS — Daunte Wright called his mother. The tremble in his voice told her something was wrong. The police had stopped him, he told her nervously.

“He’s afraid of the police, and I just seen and heard the fear in his voice,” said his mother, Katie Wright.

She tried to keep him calm, as he spoke with her on the phone on Sunday while he was being pulled over in the Minneapolis suburb of Brooklyn Center.

He had told her the reason for the traffic stop had something to do with the air fresheners dangling from the rearview mirror, and she asked him to take them down and to let her speak with the officers over the phone.

Mr. Wright, 20, she said, asked the officers, “Am I in trouble?” Then Ms. Wright heard scuffling and a woman screaming in the background. The call dropped abruptly, and Ms. Wright feared that her son had become another victim of police brutality in America.

Before Sunday, Mr. Wright had been a young Black man unknown to the world, but known and loved by his friends and relatives in the Minneapolis area. He was a young father of a toddler who was almost 2, Daunte Jr. He loved basketball. As a freshman at Thomas Edison High School, he was voted a “class clown.”

But in the moments that his mother overheard in horror, her fears were realized, Ms. Wright said on Tuesday on “Good Morning America” and at a news conference in Minneapolis. Her son was shot by the police in what officials described as an accidental discharge, after a veteran white officer pulled and fired her firearm instead of her Taser as officers tried to handcuff him. Like Michael Brown, Tamir Rice and George Floyd, Mr. Wright’s name and life have become both a chant and symbol, and in the small universe of the Twin Cities region, the police killings of Black men share tragic connections.

“This was the worst day of my life,” Ms. Wright said during a news conference outside a Minneapolis courthouse on Tuesday.

Moments earlier, Ms. Ross had wrapped her arms around Ms. Wright. Ms. Ross, who delivered tearful testimony this month in the trial of Derek Chauvin, the former Minneapolis police officer charged with killing Mr. Floyd, led a small crowd in a prayer circle. But the sight of family members of at least six Black men killed at the hands of the police and a relative of Emmett Till, the 14-year-old whose lynching remains one of the nation’s most gruesome hate crimes, overwhelmed her and she left in tears.

Mr. Wright’s family said the young father did not have to suffer the same fate.

“He was loved. He was ours. This is no broken family,” said an aunt, Naisha Wright.

He was remembered as a dedicated father with a bright smile and outgoing demeanor. The mother of his son, Chyna Whitaker, said in a Facebook post that the two had been amicably sharing custody of the child.

“He was just like any other kid,” Mr. Abdullah said.

He had also attended Edison High School in Minneapolis, where he was voted class clown as a freshman, according to the school’s 2015-16 yearbook.

“He loved to make people laugh,” said Emajay Driver, a friend of Mr. Wright. “He was just great to be around. There was never a dull moment.”

Tenzing Chime, 21, of Minneapolis, recalled befriending Mr. Wright when they were basketball teammates at Northeast Middle School. Later, at Edison High, Mr. Wright played on both the ninth-grade and junior varsity teams.

Mr. Wright, Mr. Chime recalled, “really wanted to win, and after we lost we’d be upset.” “Not at other people, but at ourselves,” he continued. “He loved playing sports.”

Mario Greer, a cousin, said Mr. Wright was also a sensitive soul who enjoyed lighting Roman candles with him.

“I didn’t get the chance to tell my cousin I love him,” Mr. Greer said, holding back tears. “I got to go every holiday now without my cousin, my baby cousin.”

Family members created a GoFundMe page to raise money for his burial, and by Tuesday afternoon nearly $ 500,000 had been raised. Kristie Bryant, one of Mr. Wright’s aunts who helped draw attention to the page, wrote on Facebook, “I never imagined this happening to someone in our family.”

The police said that Mr. Wright was stopped on Sunday because of an expired registration tag, and that the officers noticed something dangling from the rearview mirror after they pulled him over. There was an arrest warrant for Mr. Wright after he missed a court hearing on two misdemeanor charges that he had illegally possessed a pistol and fled from Minneapolis police officers in June.

In a graphic clip of body camera video from Sunday’s traffic stop, police officers are seen outside the vehicle trying to detain Mr. Wright, who suddenly moves back into his seat as a struggle ensued. Officer Kimberly A. Potter, a 26-year veteran of the department who resigned on Tuesday, then pointed a weapon in his direction and yelled, “Taser! Taser! Taser!” The authorities said she fired a gun instead.

On Tuesday, Ms. Wright described to reporters the excruciating moments on the phone with her son before he was killed. After she lost the connection, she said, she tried calling him back repeatedly. But there was no answer.

Finally her phone rang again. It was a FaceTime call from a young woman who had been sitting in the passenger seat during the traffic stop, she recalled. A horrified Ms. Wright watched a live video image of her dead son, slumped on the driver’s seat.

An autopsy revealed that Mr. Wright died after he was struck by a single bullet in the chest.