Anthony Joshua and Tyson Fury agree on fight site as... 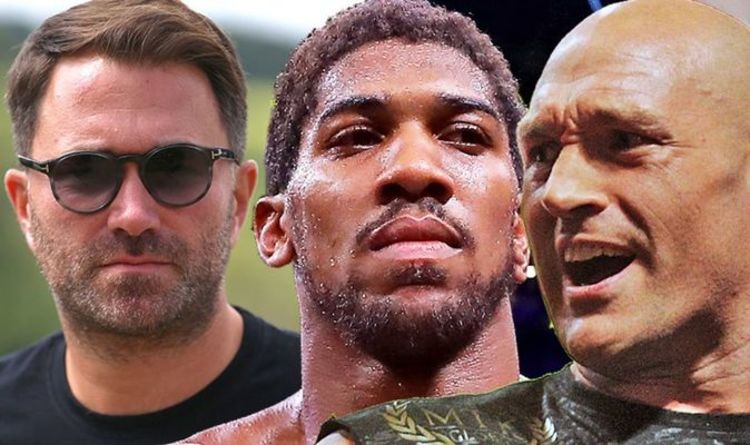 Eddie Hearn has confirmed that both Anthony Joshua and Tyson Fury have now agreed on a fight site for the undisputed heavyweight world championship this summer. Last Sunday, the offers were presented to the fighters and their teams and now it appears the wheels are in motion for an official announcement.

Hearn told Behind The Gloves, while away in Miami for Demetrius Andrade’s WBO middleweight world title defence against Liam Williams: “Both sides have approved the site offer they want to go with, we are now finalising the site offer and we’re in a good place.”

Understandably, Hearn was apprehensive to reveal exactly where the fight will be taking place.

Saudi Arabia, which staged AJ’s rematch with Andy Ruiz Jr in December 2019, is believed to be the frontrunner.

Fury confirmed last week before flying to Las Vegas to begin his training that he’d finally received a series of fight offers.

“Just had some big news. Three or four big offers on the table,” he said in a video on Twitter.

“There’s some big, big offers on the table. I’m going to go through them on Sunday and hopefully we can get this big fight on and I can smash this big dosser.

“Big useless dosser, let me say. Because when I get him I’m going to give him that [clenched fist], you big dosser.”

Joshua has already started training while the Gypsy King is now sharpening his tools in the Top Rank Gym in Vegas.

His trainer SugarHill Steward has also arrived in Vegas as the trio look to begin their official fight preparations.

“I don’t see how any of that can happen in July or even early August from my perspective,” he told talkSPORT.

“Robert McCracken is AJ’s trainer, he’s also our Olympic team’s head coach, so he’s gonna be in Japan – I think the Olympics start on July 23, and I don’t know what the quarantine period is.

“He can’t be in two places at once. That’s if Robert McCracken’s still training AJ, maybe he’s not training the Olympic squad, I’m not sure. That’s one issue.

“I don’t believe this fight will go on until – if it’s late August we’ll be very lucky, maybe September.”

Hearn has been quick to brush aside any negative talk and doubts surrounding the fight and he insists this fight will get made this summer on his watch.