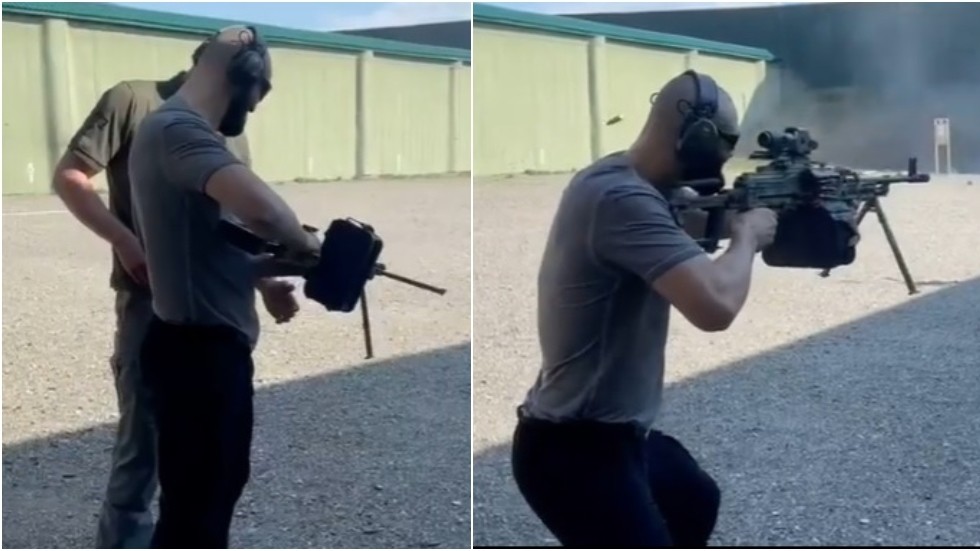 Khamzat Chimaev might be classified as a lethal weapon inside of the octagon but the surging UFC star has once again showed off his fondness for something a bit more high-caliber as he await potential summer return.

After a stunning showing of three wins (in two weight classes) in the span of just 66 days last year, it had seemed as if Chimaev’s path to MMA superstardom was unfurling in front of his eyes.

One by one they came, with John Phillips, Rhys McKee and then Gerald Meerschaert quickly defeated by the Chechen-born Swede before they could even muster any real offence of their own.
Also on rt.com All guns blazing: UFC sensation Chimaev fires MACHINE GUN on visit to Chechen homeland after meeting Kadyrov (VIDEO)
He was primed to announce his arrival as a serious threat to the summit of the welterweight division when he was paired with top contender Leon Edwards late last year, but a Covid diagnosis – and the subsequent recovery thereof – meant that the wheels slowed on Chimaev’s march towards UFC gold.

UFC boss Dana White revealed that Chimaev’s recovery was being delayed because the ultra-active fighter just couldn’t stay out of the training room and allow his body an opportunity to recover, and if White might have prescribed a new hobby for the fighter to keep him mind off things, it seems like he has found it.

In January, during a visit to his native Chechnya Chimaev met with local leader and well-known MMA fan Ramzan Kadyrov where he once again was offered the opportunity to fire a machine gun at a shooting range – though this footage has since been deleted from Chimaev’s Instagram page.

And Khamzat isn’t the only undefeated fighter to have done just this, after Floyd Mayweather did the same in Grozny in 2018 after attending a combat sports event with Kadyrov.
Also on rt.com ‘Natural born sniper’: Mayweather takes shooting practice on Chechen trip to meet Kadyrov (VIDEO)
The latest footage, however, suggests that Chimaev has fully recovered from Covid-19 ahead of his return to training and next fight, which is tipped to take place in July.

No name, date or location has yet been announced this time around – but Chimaev will certainly be hoping that he won’t be firing blanks in his comeback fight.