After stalling for years, effort to allow permitless carrying of... 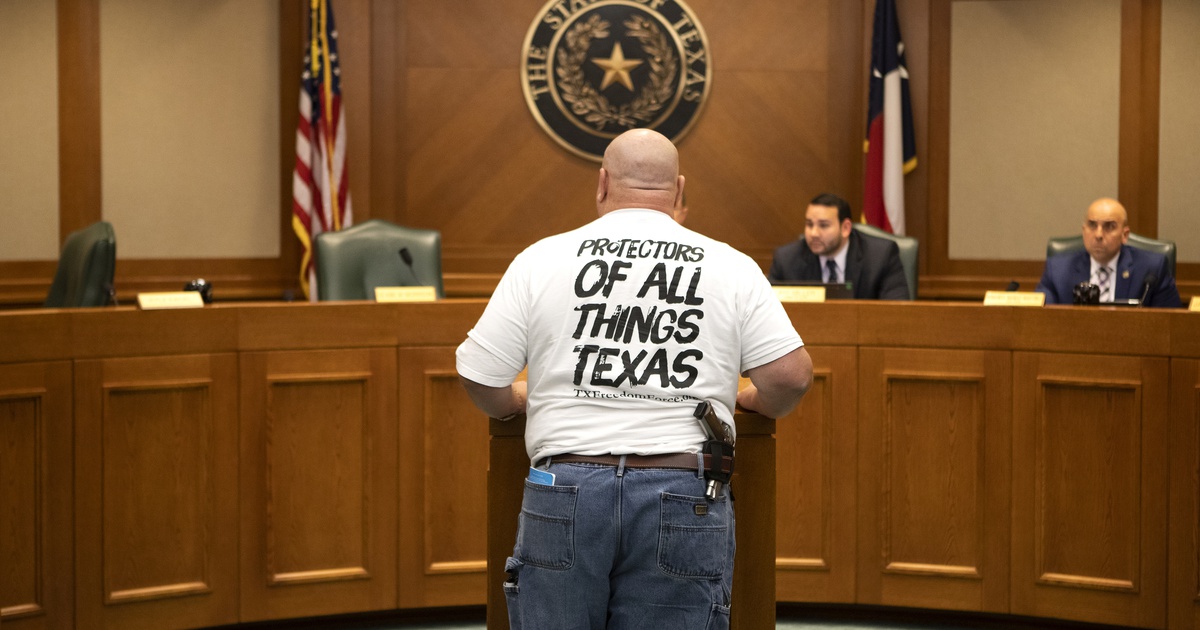 In 2019, a Democratic lawmaker recalled Thursday evening, the bill didn’t even get a hearing “when folks with armed weapons were walking the streets of some of our leaders in this chamber that are still here today — some of them are — asking the wives and spouses of those individuals where their husbands stood.”

“I remember that that was just enough to say we’re not gonna even hear the bill,” said the legislator, Rep. Trey Martinez Fischer of San Antonio.

But minutes after Fischer spoke, the bill passed the House. Earlier that day, Fischer said, he and a senior Republican colleague “reflected for a very brief minute on how much things have changed over our times here.”

Indeed, the cause has come a long way in the Texas Capitol, quickly — and it broke through this week in resounding fashion. The legislation not only attracted a somewhat bipartisan coalition — seven Democrats voted for it — but its passage suddenly put pressure on a less enthusiastic Senate. Under Lt. Gov. Dan Patrick, the upper chamber has become the better-known chamber for pumping out legislation favored by conservative activists.

Now all eyes are on Patrick’s Senate.

“It would be unthinkable for the Senate to let this bill die after the House has taken such strong and decisive action on it,” said Rachel Malone, Texas director for Gun Owners of America.

House Bill 1927 would eliminate the requirement for Texas residents to get a license to carry handguns if they are not already prohibited by state or federal law from possessing a firearm. Supporters of permitless carry, including gun rights groups and conservative Republicans, argued the measure simply allows Texans to exercise rights guaranteed under the Second Amendment, calling it “constitutional carry.” Democrats, joined by some law enforcement officers and faith leaders in opposition, instead cited the need for stricter gun safety measures following the 2019 mass shootings in El Paso and Midland-Odessa.

“Instead of focusing on fixing our grid or working to restore our economy following the COVID-19 pandemic, Texas Republicans are laser-focused on making it easier for criminals to access dangerous weapons despite the mass shootings that we’ve seen time and time again across this country,” said Mike Collier, a Democrat who has said he is likely to challenge Patrick for lieutenant governor in 2022, in a statement Friday.

Such proposals have not made it nearly as far in the House in recent sessions. House Speaker Dade Phelan’s predecessor behind the gavel, Dennis Bonnen, and his predecessor, Joe Straus, were resistant to the idea and especially chafed at the tactics of its supporters. Bonnen declared the proposal “dead” last session after a gun rights activist showed up at his Lake Jackson home to advocate for the proposal.

But supporters got their biggest ally behind the gavel yet in Phelan, the Republican speaker from Beaumont who joint-authored a permitless carry bill in 2017. The primary author of that legislation was Rep. James White, R-Hillister, who Phelan tapped this session to chair the House Homeland Security and Public Safety Committee after a Democrat previously chaired it.

Late last month, on the eve of White’s committee voting out HB 1927, Phelan said in a radio interview that he was unsure if permitless carry would make it to the floor — “but this is as good as any session for that to happen.”

While much of the recent drama surrounding the ideas has originated from the lower chamber, things have been less certain in the Senate, where Patrick has expressed reservations about such a measure. Ahead of the 2015 session, he said he did not think there was enough support among lawmakers or the public for constitutional carry, a sentiment he reiterated in 2017 while citing law enforcement concerns with “anyone being able to walk down the street with a gun and they don’t know if they have a permit or not.”

His office did not respond to a request for comment Friday on whether the Senate will move on the bill.

Sen. Drew Springer, R-Muenster, is carrying a proposal similar to HB 1927, but it was referred to the Senate State Affairs Committee over a month ago and has not gotten a hearing yet.

One key Republican senator, Sen. Kel Seliger of Amarillo, is not immediately sold on the idea. In an interview Friday afternoon, he said his office was still researching the proposal.

“My record is I vote for just about all” bills related to gun rights, Seliger said. “At the same time, the system that we have now works.”

Senate rules in most cases require a bill to receive 18 votes in the 31-member chamber to reach the floor. There are only 18 GOP senators, so a permitless-carry bill would either need the support of all Republicans or, if someone were to defect, to pick up at least one Democratic vote. Asked if he would block such a bill from coming to the Senate floor — or vote against it on the floor — Seliger said he did not know, reiterating his office was still analyzing the legislation.

Asked if he thought constitutional carry had a chance in the Senate, Democratic Sen. Nathan Johnson of Dallas said in an interview Friday afternoon that his “faith in my own judgment on that question was shaken” by the House vote.

“I would’ve never dreamed it would come out of the House,” Johnson said. “Over in the Senate, I don’t have a good sense.”

Patrick is not the only state leader whose current position on the proposal is unclear. Gov. Greg Abbott has also been noncommittal when asked about it in recent years. After signing a bill in 2017 that decreased the costs of Texas gun licenses, he was deferential to the Legislature on permitless carry and said he thought Texans were happy with that session’s strides on gun rights.

Both Button and Meyer represent rapidly changing districts in the Dallas area and surprised political observers last year when they pulled off narrow reelection victories despite Joe Biden easily carrying their districts — by double digits in Meyer’s case.

Meyer’s office didn’t respond to a request for comment Friday on his vote.

Two of the Democrats who voted for HB 1927 — Reps. Terry Canales of Edinburg and Ryan Guillen of Rio Grande City — were expected because they were already joint authors of the legislation. And Canales gave a forceful speech shortly before the initial vote Thursday, arguing the bill addresses “a bunch of ‘I gotcha’ hodgepodge laws” that expose lawful gun owners to prosecution if they make honest mistakes like forgetting to renew their permit.

“At this point in time, what we have is a bunch of ‘I gotcha’s,” Canales said, “and this is my opinion as a criminal defense attorney of about 15 years — this is a criminal justice reform bill and I urge you to support it to keep people out of jail for no reason whatsoever.”

The five other Democrats who backed the bill were Reps. Tracy King of Batesville, Harold Dutton of Houston, Eddie Morales Jr. of Eagle Pass, Richard Peña Raymond of Laredo and Leo Pacheco of San Antonio. All but one of the seven Democrats who voted for the proposal — Dutton — represent parts of South Texas, where Republicans made surprising inroads in November and are bullish about their chances in 2022.

Guillen and Morales represent the only Democratic-held state House districts that Trump carried last year — and easily so, by 13 and 8 points, respectively.

“This bill simply allows law-abiding Texans rights afforded to them under the Second Amendment of the U.S. Constitution,” Raymond said in a statement to the Tribune. “It’s pretty straightforward.”

Among Republicans, the bill’s passage was particularly a pivotal moment for the House Freedom Caucus, whose vice chair, Rep. Matt Schaefer of Tyler, carried the legislation. Schaefer was the chair of the caucus when it launched during the 2017 session and quickly made waves — and alienated colleagues in both parties — with its disruptive procedural tactics. But four years later, the caucus has gone through numerous membership changes and finds itself more embraced by leadership than ever, with two of its members chairing important committees.

The current caucus chair, Rep. Mayes Middleton of Wallisville, said in a statement that the group “has worked hard on this issue over the past three sessions, and all of that hard work and diligence has finally paid off.”

The passage of HB 1927 was also a win for the Texas Republican Party, whose eight legislative priorities include “constitutional carry” — and whose outspoken chairman, Allen West, has sought to make the priorities a litmus test for Republican state lawmakers. In a statement to the Tribune, West reiterated that the issue is a state GOP priority and noted the Senate “is controlled by a 18-13 majority by Republicans.”

Until this session, the idea more often made headlines thanks to hard-charging activists like the one who went to Bonnen’s house — Chris McNutt — and C.J. Grisham, the president of Open Carry Texas. Grisham also has been affiliated with the Proud Boys, the far-right extremist group.

A Phelan spokesperson tweeted Friday afternoon that the speaker “has no relationship with [Grisham] whatsoever.”