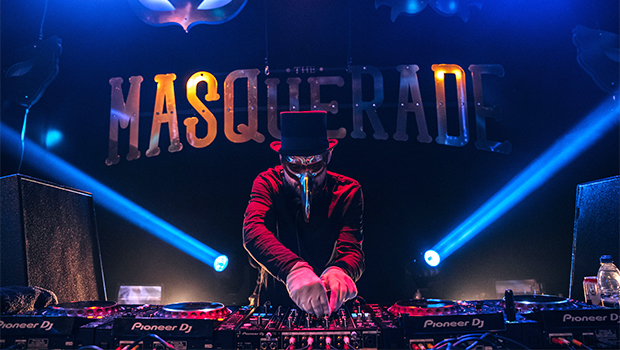 The maestro of house music, Claptone, talks with HL about remixing Trans-X’s ‘Living On Video,’ how masks help you ‘become who you imagine yourself to be,’ and more.

The past came together with the present to make the sound of the future on Claptone’s remix of “Living On Video,” the 1983 worldwide hit from the synth-pop band, Trans-X. The masked House DJ took on the project as part of Unidisc Records celebrating its forty-year history, and it was a task that presented Clapton with a challenge. “On this one, I knew I wanted to do it,” he tells HollywoodLife in an EXCLUSIVE interview over email, “but didn’t have a vision on how to transport this amazing classic into the now and the dancefloors of today.”

“The sound and appearance of the band in the original video had a very strong impression on me,” Claptone adds. “So, I chose it because it was important for me, not really knowing what I would do with it, to be honest.” His vision came while working on the remix, and the results are transcendent. The song captures the spirit of the original while making it sound relevant to the current sound of today. One might not even know the vocals on the track were nearly forty years old. Such is the skill of Claptone.

During the interview with HollywoodLife, Claptone spoke about the “Living on Video” remix. He also reflected on performing in the pandemic – like others, he live-streamed his DJ sets, giving fans something to hold them over until it’s safe to return to the dancefloor. Claptone also spoke about the power of the mask and how wearing one to a show, even after the vaccine rollout, might not be such a bad idea.

HollywoodLife: In honor of Unidisc’s forty-year history, you were asked to remix works from their back catalog. You put your own take on Trans-X’s “Living On Video.” Did you select this work (and if so, what made you pick this out of all the others?)

Yes, I chose to remix “Living on Video,” saying that there were many great options and, to be honest, this song does not really reflect the Unidisc sound as much as others would have done. But it had a distinct influence on me as a music lover and musician. It was one of those tracks that changed the musical landscape with its impact and its sound.

The sound and appearance of the band in the original video had a very strong impression on me. So, I chose it because it was important for me, not really knowing what I would do with it, to be honest. Usually, I know what I’m gonna do when I take a remix on and otherwise won’t take the offer. On this one, I knew I wanted to do it but didn’t have a vision on how to transport this amazing classic into the now and the dancefloors of today. I just developed that vision when working on the remix. On this specific one, I did about three completely different versions and chose the one that just came out. Lots of work, but a classic like this deserves the work cause it deserves a great remix.

When we spoke to T-Pain in late 2020, he said that a remix could “tell another side” of a song’s story. What was the “story” you were attempting to tell with your version of “Living On Video?”

Well, that story, from the perspective of the remixer, always revolves around the question: “How do I translate that original [song] to my dancefloor, to the people that love Claptone and House Music of today?” For me, it’s mainly about that. Introducing a song from a different context to my sonic universe. With some songs and tracks, you can easily do that. With some, it’s hard work (not that the listener would realize), and for some, this doesn’t work at all (usually the remix offers I turn down).

Hearing the first part of your question, I was like, “I’m gonna say ‘no’ to this, as I don’t want to be seen as just the remixer of catalogs of great inspirational labels and artists. I wanna be perceived as an artist in its own right writing original music and well – yes – making solid remixes.” But then you mentioned Factory Records. Damn, I would say yes to them if they’d approach me straight away!

If you were to pick someone to remix one of your songs, who would you choose, and what track?

It would be great to have Beck or Martin Gore remixing a Claptone song, Toro Y Moi, or even Odeza would be great as well. Then there are the more obvious House music remixers I’d love to have on a future release like Armand Van Helden, Paul Woolford, or John Summit. I am quite diverse in my musical preferences and wide open to stuff that’s a little left of center, like Myd, for example.

When was the last time that music gave you goosebumps?

Happens a lot during the production of new material and doesn’t happen too often when listening to the radio.  Saying that, I know, this sounds a bit selfish. I think when you make music yourself, you are in a position to express your emotions, and it’s easier for you to reach a point where you get goosebumps while mixing and composing.

It’s quite possible that, even with the vaccine rollout, the next show you play may be to an audience that’s also masked. Will that possibly affect the experience, since often you’re the only one wearing a mask at a show?

Well, at my event series The Masquerade, I actually always encourage people to wear masks and dress up. But wearing a mask to become who you imagine yourself to be in order to celebrate life and being close to others who feel alike is something completely different than needing to wear a mask in connection with social distancing and, at times, plastic cages. So, yes, it does affect the experience, but it’s better than not celebrate together for sure. But, in the end, we all look forward to a time when we can wear cool masks because we feel like it and we want to wear them to enhance the experience, that’s for sure.

As someone who has a penchant for masked groups, I’ve noticed that sometimes, the artists change the mask to represent a musical change or reflect a new moment in their artistic journey. Do you think you will ever modify the mask, or do you think altering it would compromise the Claptone identity?

I can not see myself changing my mask as long as I feel comfortable with it, and I still do. But one must stay open-minded and open-hearted.

2020 saw yourself and a lot of artists perform via live stream. What do you think was the best part/aspect of that?

The best aspect is that you can really dig deep, chose a certain theme, go back into time, do something you wouldn’t normally do, play something you wouldn’t normally play on a club night or in my Clapcast. I really enjoyed spinning some vinyl as well, which I didn’t do for ages. It felt great, apart from the fact that my gloves weren’t coming in handy there. But, just the fact that I was able to go through my record collection and could pick tracks I haven’t heard or played forever, tracks that aren’t on Beatport, Apple Music, or Spotify, a sonic empire that exists only on vinyl. That was great.

Yes, you will! But it’s a secret 😉 What is not a secret and already out there for the streams is my new single “Zero.” Check it out if you haven’t really done that yet. First new Claptone track of 2021 but surely not the last. Thanks for reading this far. I really appreciate it!

Check out all of Claptone’s latest offerings: the “Living On Video” remix, his song “Zero,” and his remix of Storm Queen’s “For A Fool.”