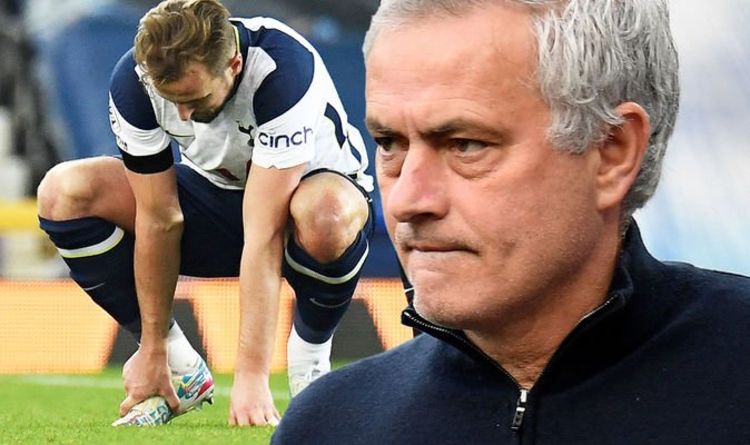 Jose Mourinho declared that he will remain ‘optimistic’ over the injury picked up by Harry Kane after Tottenham were held to a draw by Everton at Goodison Park on Friday evening. The 28-year-old was substituted during the closing stages of the match after he appeared to pick up an ankle problem, casting significant doubts over his involvement in this month’s Carabao Cup final and potentially even the upcoming European Championships with England.
The result saw Tottenham miss out on the chance to stretch their lead over Everton in the Premier League table to four points, with both clubs fighting hard to secure European qualification for next season.

However, the big story from Goodison Park was the injury to Kane, which will undoubtedly come as a huge blow for Spurs ahead of the Carabao Cup final against Manchester City.

The north London club will have the opportunity to claim their first piece of silverware since 2008 later this month, but there is a chance that they could be without their star man and attacking talisman against the best side in the country at Wembley Stadium.

Kane injured both ankles back in January during the 3-1 defeat to Liverpool back in January, with Spurs scoring just once from open play during his absence.

Speaking after the full-time whistle on Friday evening, Mourinho told Sky Sports that he will remain hopeful of Kane’s availability for the Carabao Cup showdown, stressing that he was unable to confirm whether or not he will be forced to spend any length of time on the treatment table.

“It is too early to say something,” said the Portuguese boss.

“For him to leave the pitch with a few minutes to go is obviously because he felt something.

“Let me be optimistic and believe that he has time to recover. Let’s see.

“Let me be optimistic and believe it’s nothing serious. It’s obvious he’s a very important player for us. I cannot say much or speculate.”
Advertisements

Both of Tottenham’s goals were scored by Kane, with his second strike, a fiercely-hit volley from inside the area, catching the eye in particular.

The England skipper has been in the form of his life for the vast majority of the campaign, finding the net on 21 occasions in the Premier League since the beginning of the season.

Mourinho continued, hailing Kane’s performance after yet another influential showing at the tip of Tottenham’s attacking trident.

“Both [Kane’s goals] were from crosses but it was great finishing,” he added.

“It’s the kind of player that when you see the first touch and the control, we are used to seeing it in training and we know it is fantastic finishing.

“Two beautiful goals but not a surprise for the ones who see him do it every day in training.”