Covid vaccine side effects: Is there a connection between bleeding... 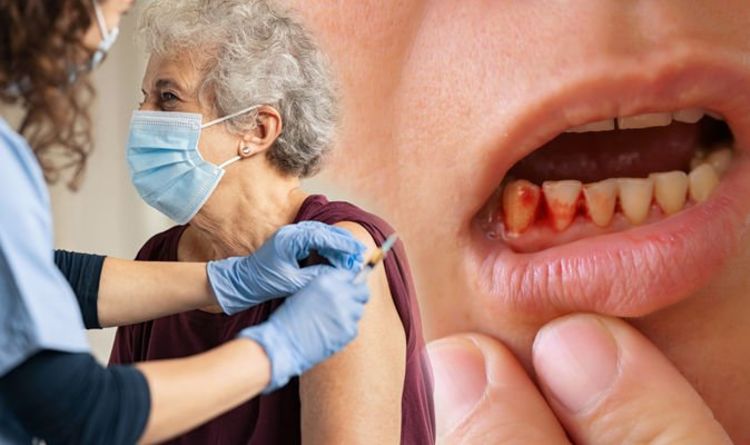 Side effects of the coronavirus vaccines have been a hot topic of late with blood clots being on the top of the list of concerns. Could the vaccine cause your gums to bleed?

A preprint of a study yet to be published was undergone by the Norwegian Institute of Public Health, NIPH, and found the AstraZeneca vaccine may lead to bleeding disorders.

Researchers used an ongoing study called the Norwegian Mother, Father and Child Cohort Study and examined questions pertaining to side effects observed in those who had received the AstraZeneca vaccine throughout Europe.

Participants were asked through questionnaires regarding potential side effects after their COVID-19 vaccinations.

These side effects included skin bleeding, nose bleeds and bleedings in the gum known as gingival bleeding.

READ MORE: James Martin: TV chef says heart disease has been an issue in his family for generations

Researchers wrote of the findings and said: “In this study, cohort participants vaccinated reported bleeding episodes significantly more frequent as compared to recipients of mRNA vaccines.”

The only other variable that showed a clear association to bleeding episodes, besides the different vaccines, was gender.

In total, 3.1 percent of women reported skin bleedings as opposed to 1.3 percent in men.

The study will soon be available as a preprint on Medrxiv.

At least 10 European countries have suspended or limited vaccinations.

Austria was the first country to halt the use of a single batch of AstraZeneca vaccine after one person aged under 50 died from a blood clot after receiving the first shot.

Denmark, Iceland and Norway followed sit by halting the AstraZeneca vaccinations after further thromboembolic events including the death of one woman in Denmark.

‘Between, ‘There, bleeding, Covid, effects, gums, side, Vaccine, vaccines