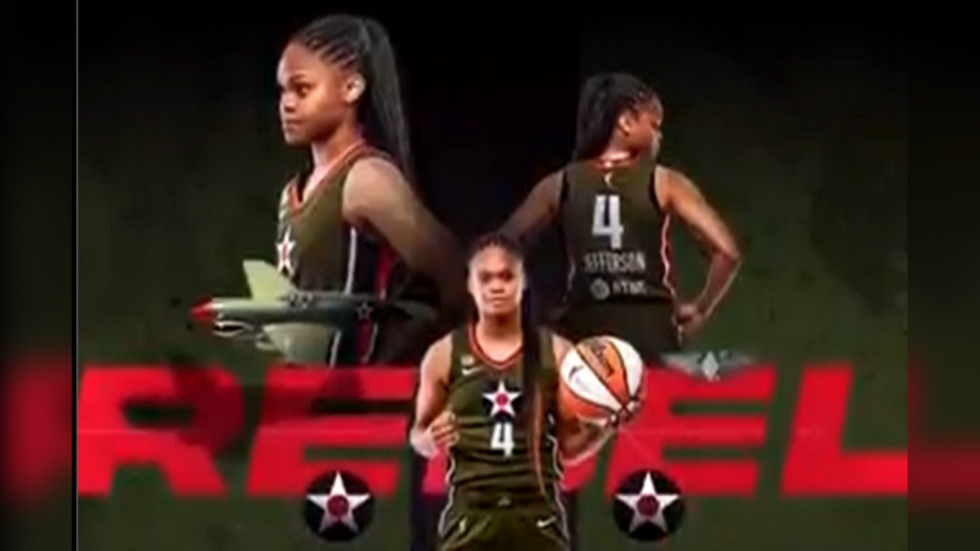 An effort by the WNBA’s Dallas Wings to honor women pilots who helped the US military during World War II has been canceled as offensive, after critics noted black people hadn’t been allowed to join the female flying force.

The Dallas team’s new ‘Rebel Edition’ jersey, which Nike introduced earlier this month as part of a collection of new Women’s National Basketball Association (WNBA) uniforms, was meant to pay tribute to the Women Airforce Service Pilots (WASPs). The WASPs helped the war effort amid a manpower shortage by testing and delivering planes for the Army Air Forces. However, Nike, the WNBA, and the Wings said on Friday that the jersey wouldn’t be worn by the team or marketed to their fans after all, because they had since learnt the WASP corps hadn’t accepted black pilots.
Also on rt.com Not worthy enough for woke brigade? Justice crusader Rapinoe rips into NBA star – despite his efforts to HELP women
The jersey “does not align with our shared values of diversity, equity, and inclusion,” said a joint statement given to Time magazine by the league, the team, and Nike. The Wings and Nike will now collaborate on a new ‘Rebel Edition’ jersey to replace the offending design.

The jersey featured a star logo inspired by the signature motif of the Curtiss P-40 Warhawk – a plane that was built in the Lone Star State and flown by WASP aviators. As the Wings noted before the controversy, the volunteer WASP members were “heroes,” as the first women to fly US military aircraft.

Nearly 1,100 women joined the WASP, and each had to pay her own way for flight time and licenses in order to qualify. Even during training in Sweetwater, Texas, they were obliged to pay for their room and board. Their service freed up male pilots to be sent overseas for combat missions. The women had expected to join the fighting themselves, until the controversial program was shut down in 1944, by which time 38 had died in accidents. Ex-President Jimmy Carter signed a bill in 1977 that finally gave them veteran status.
Also on rt.com 3 WNBA teams and their players fined for wearing #BlackLivesMatter shirts
The WASP force had some Asian and Hispanic members, as featured in a Teen Vogue article in 2017, but black people weren’t allowed to join. Then again, black male pilots were also blocked from flying for the US military until a special group called the Tuskegee Airmen was formed during World War II. They entered combat in 1943, and their successes helped lead to the desegregation of the military in 1948.

Journalist Jasmine Baker, a self-described “women’s sports culturalist,” was among those who called the WNBA’s attention to the new Dallas jersey’s alleged offensiveness. “Those of us who understand America’s history also understand how that impacted our armed forces,” she said. “I knew no one, especially in the Wings org, had done their homework about WASP.”

People keep asking me why I hate the Wings rebel jersey so much. Those of us who understand America’s history also understand how that impacted our armed forces.I knew no one, especially within the Wings org, had done their homework about WASP.A simple google search.😒 https://t.co/3O2mmLDFxYpic.twitter.com/L1WwzLMq9D

Baker complained on Friday night that, even after the jersey was canceled, the Wings hadn’t deleted a Facebook post promoting the new design. The team’s Facebook and Twitter messages unveiling the new jersey were removed as of Saturday morning, however.

I’ll say this and then I’m off to bed because I’m spent, and this is why…As of today at 9:45pm cst, after all the statements have been put out, the Wings still have this up on their FB page. Sis deserves better, fans deserve better….Like I’ve been sayin. Night. pic.twitter.com/h3RxEmBi69

There was a relatively recent time in America when honoring the WASP pilots for their heroics – despite racist Army policies they didn’t themselves set – was deemed both socially and politically acceptable. Indeed, then-President Barack Obama awarded the WASPs a Congressional Gold Medal in 2009.