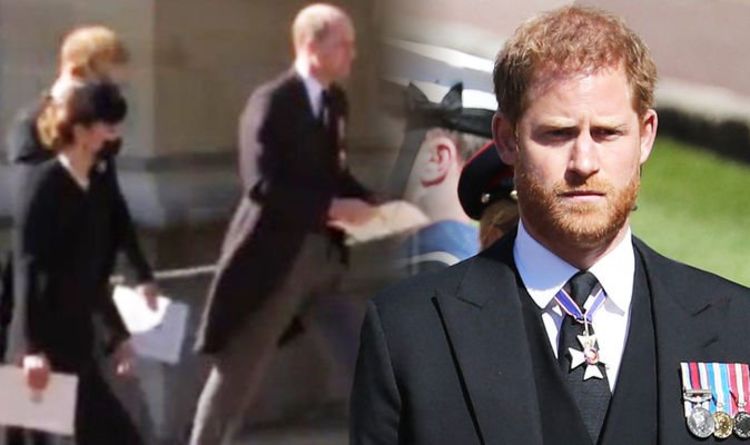 Prince Philip‘s funeral took place at St George’s Chapel at Windsor Castle. Due to Covid restrictions, only 30 guests were able to attend.
As they entered, the royal brothers looked sombre and a body language expert commented on their interactions.

Body language expert Judi James suggested the royals did not communicate much before they went into the chapel.

However, this seemed different after the funeral ended and they were seen leaving.

She told Express.co.uk: “Harry had seemed to be suffering before the service, rolling his shoulders in what looked like a gesture of self-boosting as though bracing himself as he walked in and then sitting alone in the pews.

“Harry and William had shown no sign of contact before the service but as they walked out we could see Harry finally eye-checking his brother.”

Prince Harry and Prince William have not seen each other in over a year.

This was caused by Prince Harry’s move to Los Angeles and the coronavirus pandemic causing travel restrictions.

While they may not have seen each other for many months, Judi claimed their body language showed a “natural closeness” after the ceremony.

While Kate looked pleased to see her brother-in-law, she stepped back and the two brothers walked together.

Judi added she may have done this to allow Prince Harry and Prince William to catch up.

She concluded: Kate turned her head in to pay fond-looking attention but then tactfully stepped back to allow the two warring brothers to walk off talking to one another.”