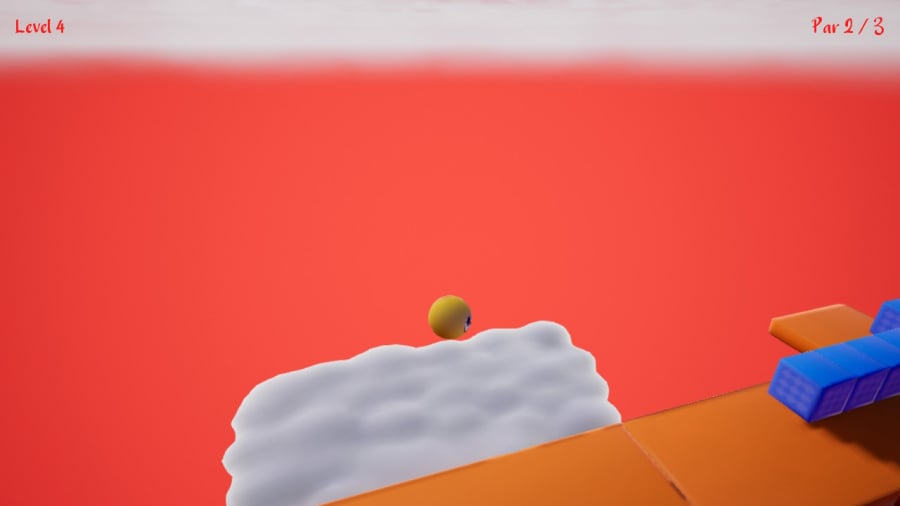 Angry Golf is perhaps the most apt title for a video game ever. This isn’t because the main character has a permanently furrowed brow, but rather for how the game makes you feel while you’re playing it. It’s one of the most poorly designed, unfinished games we’ve played on the Switch, and the golf gameplay feels like it’s almost entirely reliant on random luck rather than skill. In short, it’s a game that will make you seethe with rage.

Starting off with an incredibly basic main menu, you’re given the option to either play through each level in order, or choose one at will (provided you’ve completed the level at least once). Once you load into the game’s first stage, you’ll immediately notice problems. As you move the camera around, the space around your ball disappears and reappears completely, flashing in and out of existence for several seconds at a time. It’s ludicrous, and makes lining up each shot a huge chore.

The level design itself is really no better. Unlike normal golf games, your goal isn’t a hole in the ground, but rather a literal golden goal post. The game frustratingly doesn’t give you much indication as to where the goal is located in each level, and with a few of the courses branching off into different directions, it’s often impossible to complete your task within the designated number of strokes, as you can waste a good four or five hits just trying to find the goal.

Taking each shot is a simple case of holding down the ‘ZR’ button until you reach your desired power level. The power gauge is located in the bottom right of the screen, but there’s no guide or marker to show where your shot might land. You have to completely rely on the direction the camera is facing and just sort of guess where the ball might end up. Needless to say, you’ll end up falling off the edge of the map a lot during Angry Golf (a point made even more frustrating when you consider that some of the holes don’t reset; you just keep falling and falling in perpetuity unless you manually restart).

Visually, there’s little to no coherency or consistency. Environmental textures are sometimes present, although often not, so trees and buildings just look like blocks of solid colour. Other surfaces are also poorly implemented; one such level is located within a passageway made entirely of glass, but because the glass looks nothing like what you’d expect glass to look like, the developer actually includes the words ‘glass walls and ceiling’ within the level itself to clue you in. Better than nothing, we suppose.

It goes without saying at this point, but we can’t recommend you play this. It’s a frustrating experience right from the start, and there’s really no incentive to play through the game’s forty-odd stages beyond morbid curiosity. The visuals are unattractive, and taking each shot is a chore we wouldn’t wish upon anyone. Angry Golf is a bunker shot; best leave it there.