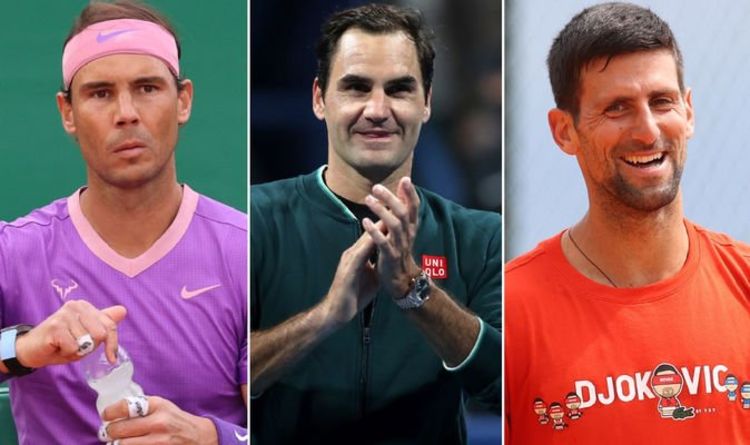 Rafael Nadal is confident he has two more years in him at least at the summit of men’s tennis as he bids to become the most successful male player of all time. Nadal can overtake Roger Federer and move on to 21 Grand Slams if he wins the upcoming French Open.
Federer has confirmed he will play Roland Garros this year when the Slam gets underway on May 30 but it is Nadal who is the massive favourite, given 13 of his 20 majors have come on the red clay in Paris.

But Federer, who turns 40 in August, and long-time rival Nadal, who will be 35 in June, are slowly but surely reaching the end of their careers.

The pair have defied expectation to continue to dominate into their mid-to-late 30s but Novak Djokovic is rapidly closing in on the two 20-time Grand Slam winners having clinched his 18th major at the Australian Open earlier this year.

The trio continue to be the biggest threats at Slams despite their age, with Djokovic also ageing and set to turn 34 next month.

And world No 3 Nadal, as he bids to outdo Federer and Djokovic and go down as the greatest of all time, hopes to have another two years at least on the ATP Tour.

The ‘King of Clay’, an 86-time tour titlist, told the Metro of his future: “I mean, I don’t think that’s… you can’t predict what’s going on in the future.

“Of course, I will not be playing until the age of 45, no? I am always trying to do things as best as possible to play as long as possible.

“As everybody knows, of course it’s going to arrive one day that you cannot keep going. For the moment, I’m happy what I’m doing.

“I’m enjoying it and I hope to have the chance to keep around the tournaments for the next couple of years.”

Nadal insists he is different to rival Djokovic in that he does not obsess over records, with the Serbian having made it clear he was delighted to recently overtake Federer for the most weeks as the No 1 ranked player in history.

Though it is clear that a relentless competitor such as Nadal would still relish the opportunity to win more Slams than any other male player ever, a feasible goal if he can maintain his French Open dominance a few more years.
Advertisements

“I enjoy what I am doing. I am happy playing tennis,” the Spaniard continued. “Of course, I want to win more Slams, yes. No doubt about that.

“But I never get – I mean, Novak is more obsessed about this, more focused… Not in a negative way. No, he’s more focused on just these things and it means a lot to him all of this stuff.

“Like he’s always saying and talking about these records and well done for him… but it’s not my approach to my tennis career.

“I have a healthy ambition. Of course, I am ambitious, if not I would never be in the position I am today but I have probably a different kind of ambition than him, for example.

“I just keep going, keep doing what I’m doing and just try to put myself in a position to keep enjoying the tour and, of course, try to achieve as much as possible.

“I don’t get frustrated if I am losing one tournament, I am trying to approach the thing in a different way.

“I know some of the numbers are completely crazy and I could never dream at all about these numbers. At the same time, I never had a lot of time to think about numbers.

“Hopefully at the end of my career, when I stop doing what I am doing, I’m going to have the time to analyse more these things. Today, I’m just focused to try and keep going.

“Tennis, it goes quick. We have a lot of tournaments throughout the year and, for example, during this clay-court season I’m playing in Monte Carlo, Barcelona and then probably Madrid and Rome and then Roland Garros.

“So it’s not plenty of time to enjoy success or to think about, ‘I have this. I have won this’.

“I know I had a lot of success in this part of the season but in the past. This year is another year. The only thing that I’m doing is try to play and practise every day with the right attitude and try to put myself in a position again to be very competitive in the beginning.”