Vitamin B12 deficiency: Two major warning signs in your face... 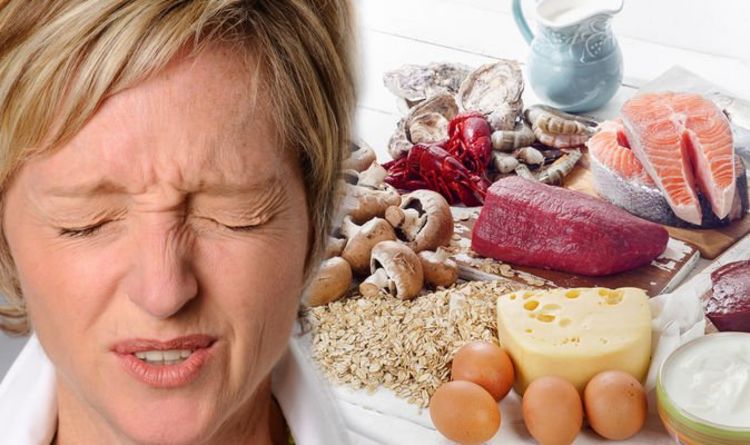 Vitamin B12 is a crucial ingredient for the healthy running of one’s body, as it’s needed to make red blood cells. Signs of a deficiency can develop very slowly but there are two major warning signs found on your face including facial neuralgia and jaundice.

Pain on the face or facial neuralgia is one warning sign of low levels of B12 to look out for in the face, according to The Thyroid Patient Advocacy.

It continued: “The pain is usually felt on only one side of the face at a time.

“This pain varies so much that it would be difficult to describe all the possibilities.

“It can be a dull pain in the cheek bone right underneath an eye.

“It can also be a sharp shooting pain across the forehead, sometimes coming downward from the scalp to the edge of the nose by the eye.

“This can be excruciating but is usually fleeting.”

READ MORE: Diabetes type 2: Out of control blood sugars could cause the Somogyi effect – what is it?

A study published in MD Edge Neurology found that vitamin B12 deficiency may cause isolated facial neuralgia with sensations of a decrease in touch and pain, as well as numbness on the affected side.

“It was somewhat unexpected that vitamin B12 deficiency can cause isolated facial neuralgia,” said Dr Jitendra Baruah, a neurologist.

He continued: “Treatment for facial neuralgia is sometimes very difficult, and patients may often go into multimodalities treatment without much success.”

Those lacking B12 may also notice the colour of their face is more yellow.

The whites of the eyes may also appear less white and more yellow.

The reason for this colour change in the face is due to the body’s red blood cell production being affected.

When the body lacks B12, it is not able to make red blood cells as easy.

People with a B12 deficiency often look pale or have a slight yellow tinge to the skin and whites of the eyes, a condition known as jaundice.

This happens when a lack of B12 causes problems with your body’s red blood cell production.

Due to the low levels of healthy red blood cells, leading to a type of anaemia called pernicious anaemia.

Symptoms of pernicious anaemia may include diarrhoea, loss of appetite, and jaundice.

How should I respond to these symptoms?

You should see a GP if you’re experiencing symptoms of vitamin B12 deficiency, the NHS says.

“These conditions can often be diagnosed based on your symptoms and the results of a blood test,” explains the health body.

It’s doubly important for vitamin B12 deficiency to be diagnosed and treated as soon as possible.

“Although many of the symptoms improve with treatment, some problems caused by the condition can be irreversible if left untreated,” warns the NHS.