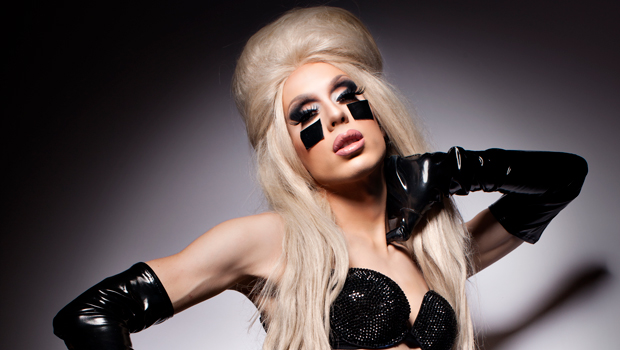 Instead of just telling a few jokes in front of a brick wall, “Drag Race All Stars’ Winner Alaska 5000 tells HL how her new OUTtv special sees her do comedy in her own ‘sickening’ way.

While watching The Alaska Thunderfuck Extra Special Comedy Special, one question pops up constantly throughout the hour-long program: why? Why is Alaska Thunderfuck (aka Alaska 5000), a drag performer of international renown, telling jokes – and why are they so…the way that they are? Why did she need a “comedy jacket,” comedy glasses, and brick wall backdrop straight from An Evening At The Improv? Why did she enlist Margaret Cho, Jackie Beat, and Sherry Vine to offer their honest opinions – “I’ve never seen a comedy special that wasn’t funny,” says Jackie near the beginning – a year after the special was recorded?

“Well, I mean, ‘why’ is definitely the question I keep asking myself, just in general about life,” Alaska says during her EXCLUSIVE interview with HollywoodLife, “but they asked me if I wanted to do a comedy special, and I said, ‘okay, but we have to be really extra about it.’ I can’t just stand there and tell jokes. I have to do musical numbers, and we have to have a drag contest. And my friend Jeremy has to do a crystal ball reading. And so I just had to do a comedy special, but put it in drag.”

At first, the Extra Special Comedy Special — part of the initial slate of content available on OUTtv, the first LBGTQ+ channel on Apple TV — almost comes across as “anti-humor,” the alternative comedy style pioneered by Andy Kaufman and Steve Martin and found within the comedic stylings of Maria Bamford, Neil Hamburg, and Eric Andre. After donning a Paula Poundstone-esque yellow blazer, a pair of glasses, and a “new-wave Joan Rivers” blonde wig, Alaska tells jokes that almost seem intentionally bad.

“I went to Australia recently. It’s true what they say. The toilets do go in the opposite direction. They poop into you,” says Alaska in one of the more PG-rated yuk-yuks. Her routine is predominantly puns and clever wordplay, with jokes that venture from the innocent (“ Have you ever heard of this store that coats specifically designed for dinosaurs? Jurassic Parkas”) to the ribald. She punctuates every punchline with a grimace or a look of disdain, a move that often elicits more laughs than the joke she just told.  (“We even kept in the clunkers because there is something really gratifying about when the joke goes out there and just sits there and nothing happens,” she says, adding that nothing was left on the cutting room floor.)

Add in the frequent breaks in the fourth wall, the commentary from Jackie, Margaret, and Sherry, and Alaska’s “comedy jacket,” and it seems that something is going on here. Its like Alaska is deconstructing the concept of “stand-up” while drawing parallels to the drag artform, how comedians have their own accouterment (the coats, the backdrop, the facial gestures) to convey the idea of “comedian” the way drag performers don clothes, makeup, tights, and tape to simultaneous subvert and convey the concepts of “male” and “female.”

“I’m glad that’s what you took away from it,” says Alaska when presented with this theory that standup has its form of drag. “I guess the reason behind it was — I’m not a comedian. I have so much respect for people who are truly comedians, who go out there, and they play these tiny comedy clubs, and all they have is their voice and a microphone, and they’re just out there, and they can tell jokes for an hour. There’s no way I can do that. So I need to do all these other things that I know how to do, and then tell some jokes in the middle. So, if it was, a commentary or, a comparison between drag and comedy — God bless, I was just trying to do drag.”

And drag, she did. It kicks off with a musical number and features three performers – Kerrii Colby, the bearded Grant Vanderbilt, and AFAB queen Sabbyiana – who represented styles of drag that viewers might not be familiar with if they only watched Drag Race.

“The thing about drag is anyone who’s done drag really understands that there’s every type of drag performer that you can imagine,” says Alaska. “I’ve always shared a dressing room with, you know, there’s a drag king over there, and there is a bearded queen over here. So it is important to show that, and also just to share the stage and share the spotlight with some amazing drag Queens who are out there, killing it and being sickening.”

Sickening as these and the rest of the Extra Special Comedy Special performances are, there appeared to be a question of taste in releasing the show. Or, if not ‘taste,’ then timing. Recorded in November 2019, the show seemed primed for a 2020 release. “By and then, the world really changed,” says Alaska. With the deadly COVID-19 pandemic and the Black Lives Matter protests, in the wake of George Floyd’s murder, going on, Alaska says she wasn’t sure if it was appropriate to release and promote a comedy special during, she out it, “during this radically shifting time.”

“Also, does it fit in the context of the world, which had changed so much within the last year?” she asks. “So I was unsure, and then we were like,’ why don’t we make this conversation part of the special as well?’ Just to put it in context of the pandemic, the shutdown. Everything’s over zoom, all of that. And so I got to tie in some of my comedy super mentors.”

“In having [these] conversations over zoom with Jackie and Sherry and Margaret, I think we got to a place where now I feel really comfortable with it,” she adds, “because the overall thinking is like, we’re always going to benefit from having a moment to, laugh and feel a little bit lighter about the world.”

Humor has been one of the few saving graces during the pandemic. So has music. While some acts have held off on releasing new music until a more commercially viable release window becomes available, Alaska gifted fans last year a handful of new songs. She released “Leopard Print” as the latest single from her 2019 album Vagina, as well as featured on Katya’s “Come In Brazil” and Ivan & Peter (ft. DJ Flula)’s “Pool Party.” Alaska also teamed with fellow drag performer Kandy Muse to transform Kandy’s viral 2018 tweet into a new song.

I’m at this gig right now alone and everyone has wanted a photo with me but no one has asked how my day was, so I’m just sitting here in vip all alone, feeling alone. this industry really is a lonely one huh.

Fast forward three years since Kandy bemoaned “sitting her in VIP all alone,” and Kandy is one of the top-four finalists on season 13 of RuPaul’s Drag Race (the winner will be crowned Friday, Apr. 23.) The prescience of the song and how it took on a whole new post-COVID subtext isn’t lost on Alaska. “It is really, really weird to think of the fact that we did that song just based on Kandy Muse’s viral tweet, where she was longing for human connection while in a VIP area in a club. But by the time even we did the music video, oh, we’re all kind of, we’re all kind of sitting alone. We’re all isolated.”

“It’s weird that song took on such a meaning and that Kandy Muse went on to do Drag Race and to make it to the final four,” she adds. “It is a strange, strangely psychic moment with that song. Maybe it caused the pandemic, who knows?”

This is not Alaska’s only musical prophecy that has come true. Before we spoke, Lady Gaga’s 2013 album ARTPOP returned to the top of the iTunes Pop Album chart after a viral Charnge.org petition asked fans to “band together to show our support for ARTPOP and the unreleased [volume II].” The petition, which has over 50,000 signatures at the time of publication, got a response from Mother Monster herself, but two years before this rally of support, Alaska hosted Justice For ARTPOP at Brooklyn’s 3 Dollar Bill.

On the one hand, this is another example of the mainstream taking years to realize what the LGBT+ community already knew. On the other hand, this is validation for Alaska’s championing an album many critics wrote off as a misstep. “I do feel vindicated,” says Alaska. “We did that show, and it was one of our biggest shows that we’ve done at 3 Dollar Bill.  I think it was the biggest show that we did at 3 Dollar Bill because we knew that we weren’t alone in thinking that ARTPOP was deeply underappreciated at the time that it came out. And so yeah, now it really makes sense that I’m glad that Lady Gaga is having a moment of people really fully celebrating it the way it deserves to be celebrated.”

Similarly, we should celebrate Alaska Thunderfuck Extra Special Comedy Special. It shows the value in the act of laughter, of putting yourself out there to try and make people smile, and of the validity of humor in the darkest times. Take it as an unintentional subversion of a comedy trope or a fun hour full of  X-rated puns you can share with your friends the next time you see them. As Alaska said, she “was just trying to do drag,” and as we all know, drag is the best.