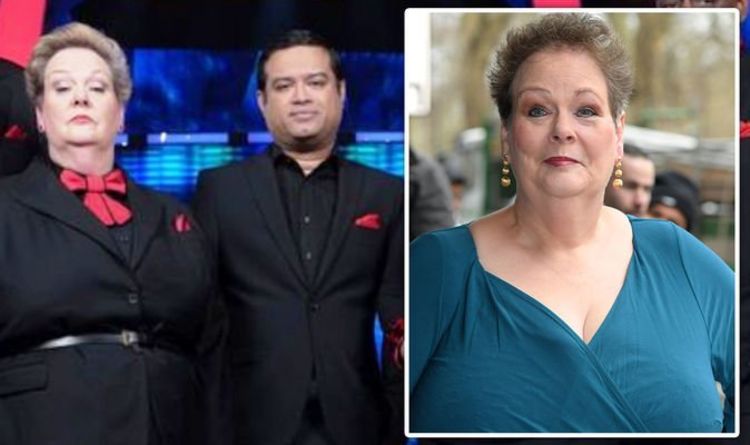 The Chase star Anne Hegerty, 62, was one of the five chasers to compete in the show which, returned for a second series earlier this year. The original plan was to have all six chasers on the show which included Anne, Paul, 50, Mark Labbett, 55, Jenny Ryan, 39, Shaun Wallace, 60, and newcomer Darragh Ennis, 40.
Ahead of the show being aired, Paul told fans he couldn’t make filming due to being ill at the time.

Speaking to Express.co.uk ahead of the return of Britain’s Brightest Celebrity Family, Anne gave an update about her co-star’s health and confirmed his future on the show.

She said: “He wasn’t very well, he is a lot better now and he is looking forward to getting back to work.

“He was happy to get back to work as soon as possible, but the specialist was saying, ‘No you do need a few weeks off’.”

The quizmaster added of his absence: “It didn’t feel quite right without Paul, it doesn’t feel right if any of us are missing.

“But, we always intended to film with all six chasers and when one of us suddenly couldn’t, they rebuilt the set and repositioned some of the lights.

“It’s a pity, but he will be back for future series.”

The Governess star went on to say that upon learning Paul wouldn’t be taking part, the chasers felt they had to “step up” as a team.

At the time, Paul, best known as The Sinnerman, took to Twitter to explain his absence.

He wrote: “New episodes of Beat the Chasers are on their way

It’s not known whether the quizzer’s illness was related to his Parkinson’s disease, which he was diagnosed with in 2019.

As part of a Twitter thread earlier this year, he wrote how the degenerative brain condition could affect his quizzing.

He said: “Though there’s no doubt the medication creates irregular bouts of tiredness that don’t really help.

“But getting probable COVID in March was in many ways worse because it totally knocked out my enthusiasm for engaging with what was going on in the real world.”

Speaking to Loose Women last year, he also said he would quit The Chase if he began to struggle answering the questions at speed.