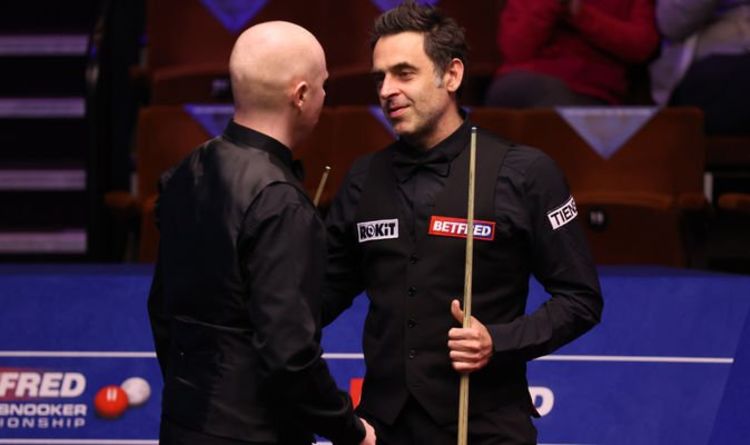 Ronnie O’Sullivan admitted that Anthony McGill was the deserving winner and said that the snooker gods “have done the right thing” after he saw his bid to match Stephen Hendry’s record of seven Crucible wins made to wait at least another 12 months on Friday night.

The Rocket was dumped out of the World Snooker Championship after just two matches as the defending champion suffered a 13-12 loss, meaning he remains one triumph behind Hendry.

Having led 4-1, O’Sullivan then found himself 10-5 down after the afternoon as McGill found his rhythm and the world No 2 entered the evening session trailing by four frames.

But he rattled off six straight frames to take the lead and put the pressure on McGill, who responded at 12-11 with a stunning break of 136 – his third century of the match – to force a decider.

And after O’Sullivan missed a red in the final frame following a break of 42, the world No 16 made him pay with an 85 that sees him into the third round to face either Stuart Bingham or Jamie Jones.

McGill devastatingly lost 17-16 to Kyren Wilson in the semi-finals of this season-ending tournament last year and is bidding to better that performance after his first ever career victory over 45-year-old O’Sullivan.

But there was no soreness from the six-time world champion post-match as he gave Scotland’s McGill credit for an excellent victory in Sheffield.

O’Sullivan, who has lost all of his five ranking finals since winning the World Championship last year, told BBC Sport: “That match he lost in the semi-finals last year, he didn’t lose it because he bottled it, he was just unlucky. He deserved his victory.

“I think any snooker player watching that last year can’t begrudge Anthony McGill a world title after that.

“It’s hard to lift yourself up after something like that but I thought he handled himself fantastically well last year. Anybody else I’d probably have really been a bit sore but I think the snooker gods have done the right thing.

“I’ll lick my wounds and come back again. It’s just one of them things.”

Speaking about his warm exchange of words with McGill after his defeat was confirmed, O’Sullivan added: “You have to [be respectful]. What can you do? It’s over. The reality is I’m out of the tournament and he’s still in.

“You’ve got to wish the man the best of luck. It’d be nice to see him go on and have a good run.

McGill said of his victory: “I played so well this morning and Ronnie just played like Ronnie tonight, he played so good. I just didn’t quite step up or reply to him. He was sort of running away with it.

“I managed to flick a frame somehow to go 11 each and that stopped the rot and I’ve finished the last two frames. I missed an easy red in the second or third frame of the session tonight, I should pot it with my eyes closed and I missed it.

“After that I just couldn’t get an easy chance, Ronnie’s safety was fantastic. His safety was so good. Ronnie gave me two easy starters for the final two breaks and I held myself together well. I’m pleased about that.

“I haven’t beat him before but to be honest I can’t even remember the last time I played him. They were all early in my career. I feel like I’m a better player than when I was the times I played him before.

“I felt as though I had half a chance in the match at the start. Almost threw it away but I’m delighted to get it over the line.”