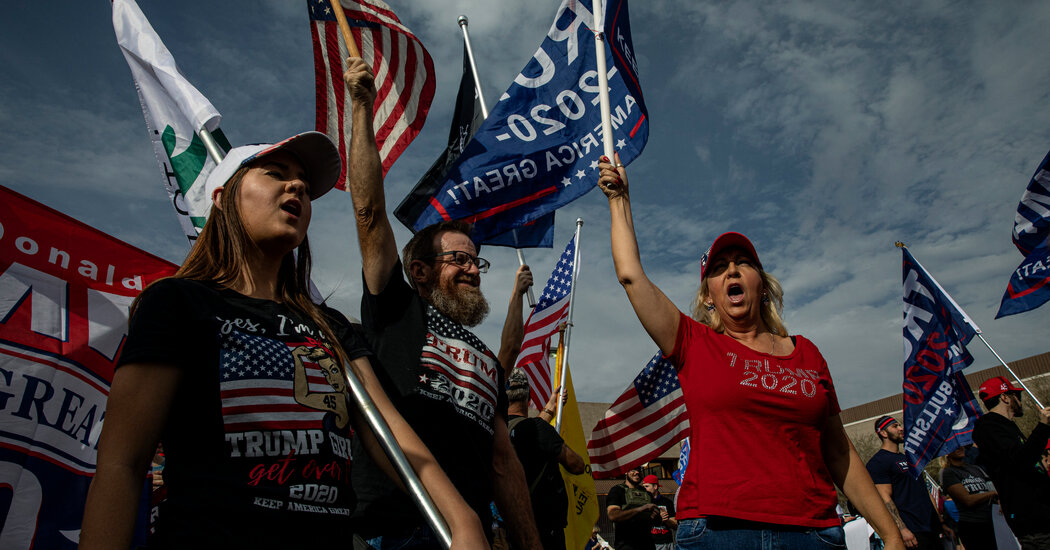 PHOENIX — It seemed so simple back in December.

Responding to angry voters who echoed former President Donald J. Trump’s false claims of a stolen election, Arizona Republicans promised a detailed review of the vote that showed Mr. Trump to have been the first Republican presidential nominee to lose the state since 1996. “We hold an audit,” State Senator Eddie Farnsworth said at a Judiciary Committee hearing. “And then we can put this to rest.”

But when a parade of flatbed trucks last week hauled boxes of voting equipment and 78 pallets containing the 2.1 million ballots of Arizona’s largest county to a decrepit local coliseum, it kicked off a seat-of-the-pants audit process that seemed more likely to amplify Republican grievances than to put them to rest.

Almost half a year after the election Mr. Trump lost, the promised audit has become a snipe hunt for skulduggery that has spanned a court battle, death threats and calls to arrest the elected leadership of Maricopa County, which includes Phoenix.

The head of Cyber Ninjas, the Florida-based firm that Republican senators hired to oversee the audit, has embraced Mr. Trump’s baseless theories of election theft and has suggested, contrary to available evidence, that Mr. Trump actually won Arizona by 200,000 votes. The pro-Trump cable channel One America News Network has started a fund-raiser to finance the venture and has been named one of the nonpartisan observers that will keep the audit on the straight and narrow.

In fact, three previous reviews showed no sign of significant fraud or any reason to doubt President Biden’s victory. But the senators now plan to recount — by hand — all 2.1 million ballots cast in Maricopa County, two-thirds of the entire vote statewide.

Critics in both parties charge that an effort that began as a way to placate angry Trump voters has become a political embarrassment and another blow to the once-inviolable democratic norm that losers and winners alike honor the results of elections.

“You know the dog that caught the car?” said Steve Gallardo, the lone Democrat on the Republican-dominated Maricopa Board of Supervisors. “The dog doesn’t know what to do with it.”

After a brief pause on Friday ordered by a state court judge, the audit continues without clarity on who will do the counting, what it will cost and who will pay for the process, which is expected to last into mid-May. The One America network is livestreaming it, and Mr. Trump is cheering from the sidelines.

In an email statement on Saturday, he praised the “brave American Patriots” behind the effort and demanded that Gov. Doug Ducey, a frequent target of his displeasure, dispatch the state police or National Guard for their protection.

“My concern grows deeper by the hour,” she said in an email on Friday. “It is clear that no one involved in this process knows what they are doing, and they are making it up as they go along.”

The Senate president, Karen Fann, said in December that the audit had no hidden agenda and could not change the settled election results in Arizona, regardless of what it showed.

“A lot of our constituents have a lot of questions about how the voting, the electoral system works, the security of it, the validity of it,” she said, and so the senators needed experts to examine voting processes and determine “what else could we do to verify the votes were correct and accurate.”

Other state legislatures have looked into bogus claims of election fraud. But the Arizona audit, driven in part by conspiracy theories about rigged voting machines, is in a league of its own. Experts say it underscores the sharp rightward shift of the Legislature and the state Republican Party even as the state edges toward the political center.

“The longer they push this,” he said, “the more they’re alienating people in the middle.”

In Arizona, the state party is headed by Kelli Ward, a former state senator who has rejected Mr. Biden’s victory and supports the audit. Under her leadership, the party in January censured Mr. Ducey, former Senator Jeff Flake and Cindy McCain for being insufficiently loyal to Mr. Trump.

The 16 Republicans in the State Senate reflect the party’s lurch to the right. November’s elections ousted the Senate’s two most moderate Republicans, replacing one with a Democrat and another with a Republican who claims lifetime membership in the Oath Keepers, the extremist group that helped lead the assault on the U.S. Capitol on Jan. 6.

Another self-proclaimed Oath Keeper, State Representative Mark Finchem, proposed in January to give the Legislature the power to reject presidential election results and choose new electors by a majority vote. (The proposal went nowhere). Mr. Finchem since has become a vocal backer of the audit.

“The people in the Legislature are more prone to believe in the conspiracy theories and are more prone to espouse them” than in the past, said Barrett Marson, a Phoenix campaign consultant and a former Republican spokesman for the Arizona State House.

Ms. Fann, Mr. Farnsworth and Mr. Finchem did not respond to requests for interviews.

The Senate’s rightward drift is simply explained, political analysts say. Most of the 30 Senate districts are so uncompetitive that the Democratic and Republican primaries effectively choose who will serve as senators. Because most voters sit out primary elections, the ones who do show up — for Republicans, that often means far-right Trump supporters — are the key to getting elected.

Responding to stolen-election claims, through tougher voting laws or inquiries, is by far those voters’ top issue, said Chuck Coughlin, a Republican campaign strategist in Phoenix.

“They’re representing their constituency,” he said. “The whole process was built to produce this.”

The senators warmed to the notion of a Maricopa County audit from the first mention of it in early December.

Before long, they sent subpoenas to the county seeking the 2.1 million ballots, access to 385 voting machines and other equipment like check-in poll books, voting machine passwords and personal details on everyone who voted. The supervisors resisted, calling the election fraud-free, and said they wanted a court ruling on the subpoenas’ legality.

The reaction was immediate: The four Republicans and one Democrat on the Board of Supervisors were deluged with thousands of telephone calls and emails from Trump supporters, many from out of state, some promising violence.

Hoping to head off a dispute, the supervisors hired two federally approved firms to conduct a forensic audit of the county’s voting machines. The audit concluded that the equipment had performed flawlessly.

Ms. Fann, who in the past had been seen as a moderate conservative, said the Senate wanted a stricter review. Senators said they had hired “an independent, qualified forensic auditing firm” for the task.

Then it developed that their selection, Allied Security Operations Group, had asserted that Arizona voting machines had been hacked in an “insidious and egregious ploy” to elect Mr. Biden.

The senators backtracked, but Jack Sellers, the chairman of the Maricopa County supervisors, charged in a Facebook post that they had chosen “a debunked conspiracy theorist” for the audit.

Tempers flared, and all 16 Republican senators proposed to hold the supervisors in contempt, potentially sending them to jail.

But that fell apart after Senator Paul Boyer, a Phoenix Republican, backed out after deciding he could not jail the supervisors for disobeying a subpoena they considered illegal.

As he stood on the Senate floor explaining his stance, his cellphone began buzzing with furious texts and emails. Some were threatening; some mentioned his wife’s workplace and their toddler son.

“It was like, ‘You’d better watch your back — we’re coming for you,’” Mr. Boyer said. The family spent days in hiding before returning home with a 24-hour police guard.

The Senate, seemingly caught unawares, initially refused to accept delivery of the subpoenaed material for lack of a secure place to store it. Officials rented a local coliseum, but the county sheriff’s office refused to provide security, calling the job outside its scope.

The second firm hired to analyze the audit results, Cyber Ninjas, says it is an industry leader. But The Arizona Republic soon reported that the company’s chief executive, Doug Logan, had posted a litany of stolen-election conspiracy theories on a Twitter account that he had deleted in January.

Among them was a retweeted post suggesting that Dominion Voting Systems, a favorite target of the right, had robbed Mr. Trump of 200,000 votes in Arizona. Dominion says Cyber Ninjas is “led by conspiracy theorists and QAnon supporters who have helped spread the “Big Lie” of a rigged election.

Mr. Logan, at a news conference last week said the company was committed to a fair, transparent process. “It’s really, really important to us that we have integrity in the way we do this count and in the results that come out of it,” he told reporters.

Ms. Fann has said that the firm and others it will oversee are “well qualified and well experienced.”

But unease about the audit has continued to mushroom. Ms. Hobbs, the secretary of state, asked the state attorney general, Mark Brnovich, a Republican, to investigate the Senate’s handling of the procedure, citing a lack of transparency about security of ballots. She noted that some of the Legislature’s furthest-right firebrands have had free access to the coliseum even as it remained unclear whether reporters and impartial election experts would be allowed to observe the proceedings.

Greg Burton, the executive editor of The Arizona Republic, said in a statement on Friday that “Senate leaders have throttled legitimate press access and handed Arizona’s votes to conspiracy theorists.”

Amid the growing uproar, the Republican senators who have approved and stood behind the audit since its beginning have largely been silent about concerns over its integrity.