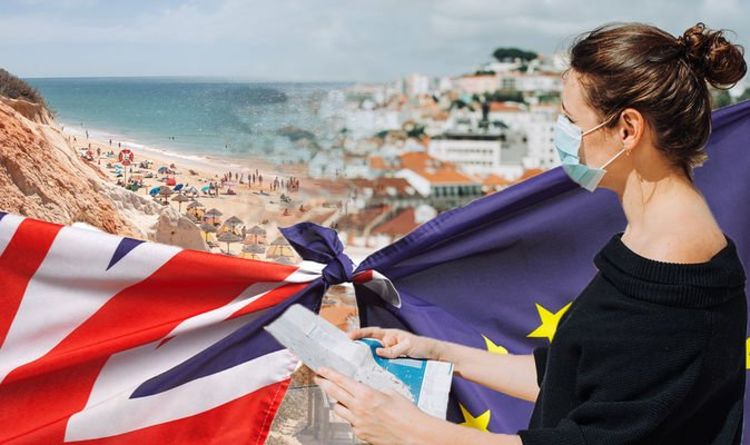 Portugal is a popular destination for Britons, whether it is for a weekly summer holiday or something a little more long-term, such as purchasing property or even relocating to the nation. In the last year, the nation has seen a dramatic drop in tourist foot traffic due to the ongoing coronavirus restrictions.

Concerns over a loss of visitors from the UK was then furthered by new rules which came into effect for Britons living in Portugal following the UK’s EU departure on December 31, 2020.

One person who has witnessed the transition firsthand is Tori Porter.

She has lived with her family in Portugal for approximately 11 years.

The fitness and wellbeing communications expert spoke with Express.co.uk alongside her mother-in-law, Agnes Kijonka, CEO of A1 Algarve Real Estate, to describe the “large impact” the tandem rules of COVID-19 and Brexit have had on the nation.

“The Algarve’s economy, in particular, is hugely dependent on tourism, but it hasn’t just been the Algarve that has been badly affected but the whole of Portugal,” explained Ms Kijonka.

“Portugal is also a huge destination for homeowners, however, most choose to be residents in the UK, therefore Brexit will have a large impact on the economy as homeowners unless a new visa comes in to support this. [They] will be limited to 90 days for every 180.

“Until now there are the D2 and D7 visa and Golden Visa as options for staying in the country for Brits.

“It is to be expected that the Portuguese government will come up with a strong solution as an alternative showing their commitment to the UK.”

Brexit has also caused some issues when it comes to ordering products from the UK.

As Ms Porter explained: “The only issue really was that since Brexit it was very difficult to order things from UK brands, which previously it was very easy to receive.”

Of course, there are ways around this for expats which boost the local economy.

“With this in mind, it’s about getting to know what your area has to offer instead.”

Despite the present concerns, Ms Kijonka is positive travel and distribution between the UK and Portugal will return with ease in due course, particularly due to the two nations’ longstanding “friendship”.

“There’s a perpetual historical friendship between the Kingdom of England and the Kingdom of Portugal which is the oldest alliance based on known history in the world that is still in force by politics with the earliest treaty dating back to the Anglo-Portuguese Treaty of 1373,” she explained.

“The English always like places that have great weather, and the weather is very reliable in Portugal.

“It’s also the same time zone and not too far away, so tourists can get the amazing weather without having to travel for a long time, which also makes travel more convenient and affordable.”

Restrictions are beginning to ease in Portugal as COVID-19 case rates decline and there are hopes travel between the two nations will resume.

Further to this, the Foreign, Commonwealth, and Development Office (FCDO) has removed its travel advisory for Portugal.

Increasingly, experts are predicting Portugal will find its way onto the “green list” for travel once Prime Minister Boris Johnson gives holidays the go-ahead from May 17.

Ms Kijonka concluded: “The Portuguese are very eager to start up again.”