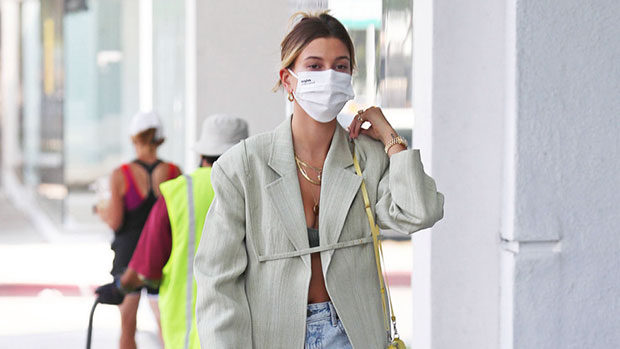 Stars are spicing up their wardrobes by wearing long jackets with their minis and short shorts! Check out Hailey Baldwin, Rihanna, and more celebrities sporting the style.

Spring can be a tricky season to fashion some trendy looks. After all, there are days where the temperatures can fluctuate, rain can dampen the day, and more. Fortunately, our favorite celebs have come up with one stylish solution: wearing longer jackets over minis and shorts! The stars seem to pull off this fashion statement with total ease, and now, they’re inspiring fans to do the same this spring season. Take a look at celebrities wearing longer jackets with their minis and shorts!

Rihanna has been a true fashion icon since she first appeared on the scene! Her outfit when she stepped out for dinner in Santa Monica on March 28, 2021, gave off major edgy vibes with some simple, classic pieces. The singer and mogul, 33, fashioned an all-black ensemble with mini skirt, crop top, and a long jacket. Ever the fashionista, she added a number of rings as her accessories and wore a pair of pointed toe black gladiator heels to complete her look!

Back in August 2020, Hailey Baldwin was spotted out and about in West Hollywood on her way to a meeting. The stunning model, 24, wore a pair of boots with denim short shorts and a long, blazer-style jacket overtop! Hailey also appeared to fashion a few gold necklaces as her main accessories, along with a cute little purse she carried over her shoulder.

When stepping out to pal Justin Bieber‘s album release party at The Nice Guy in Los Angeles on March 25, 2021, Kendall Jenner rocked her version of the long jacket trend! The supermodel, 25, wore a cute mini with a white crop top and a long black jacket overtop. Adding a fun, vintage feel to the ensemble, she wore a pair of black boots that ended just below her knees.

Emma Roberts showed fans that this trend has been around for quite some time. Back in December 2016, the actress, 30, wore a cute denim mini skirt with a green sweater and a fuzzy, long jacket overtop! She looked great for winter time in Los Angeles. Want to see more stars rocking this trend? Check out the photos in the gallery above!