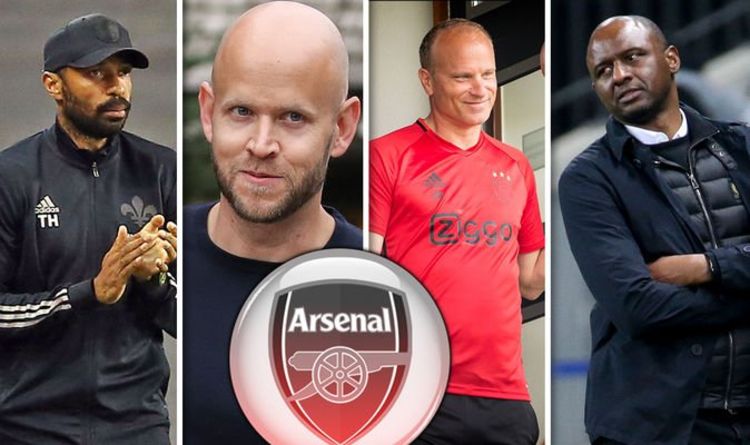 Spotify owner Daniel Ek has joined forces with Thierry Henry, Patrick Vieira and Dennis Bergkamp in preparing an Arsenal takeover bid to oust Stan Kroenke, according to the Daily Telegraph.

Spotify’s billionaire owner Ek has joined forces with the three Arsenal legends and will test Kroenke with an offer.

If the takeover is successful Henry, Bergkamp and Vieira could all return to the Emirates.

All three were part of the infamous 2003-2004 Invincible team who didn’t lose for an entire season in winning the Premier League title, wrestling it back from Manchester United in the process.

Ek is worth a staggering £3.4billion according to Forbes and he is set to make a formal offer to Kroenke to buy the Gunners.

Arsenal director Josh Kroenke, the son of Stan, insisted last week the club is not for sale following the European Super League fiasco.

Ek confirmed his interest in the Gunners last week as Kroenke was the subject of protests outside the Emirates from disgruntled fans.

On Twitter, Ek said: “As a kid growing up, I’ve cheered for @Arsenal as long as I can remember. If KSE would like to sell Arsenal I’d be happy to throw my hat in the ring.”

On selling the club Josh Kroenke exclaimed: “When are we going to sell? I am not willing to answer that question because we have no intention of selling.”

Henry made clear at the weekend he was unhappy with the way Arsenal is being run.

He told The Daily Telegraph: “This club belongs to the fans, I love the club and I will support the club until I die, but I do not recognise my club and what happened just now, with them trying to join a league that would have been closed, makes no sense to me.

“They have been running the club like a company, not a football club, and they showed their hand. Maybe it’s a lack of understanding of the core football values and maybe the money was too big of a temptation. But whatever it was, they got it wrong. Badly wrong.”

Henry also gave his verdict on whether the current owners should sell.

He explained: “Fans always decide, as you saw with the ESL. You have to listen to the fans and I can understand why they protested.

“The ESL didn’t happen because of the fans, not because anyone else was talking, Not only me, you and the fans said it was wrong, they (the owners) also said it was wrong. They showed their hand and that was disappointing.

“I remember when I arrived, not the Tottenham fans or our rivals, but a lot of the time I used to hear ‘my second team, if I had to pick one, is Arsenal’, because of the history, the culture, the class, the family.

“But I don’t hear that or see that anymore and it pains me. We need to get that image back. We need our identity back.”